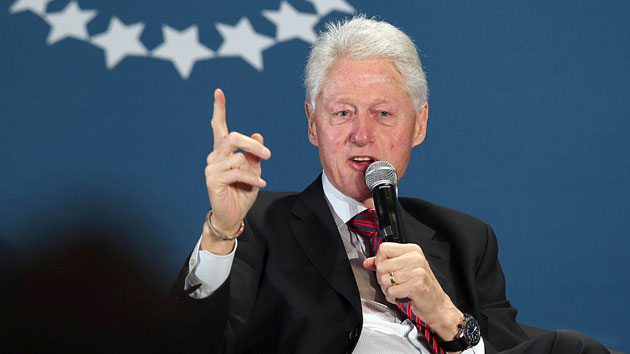 Conservatives think they’ve found new ammunition for their campaign against the Clintons—a new Clinton sex scandal. Or sort of.

On Monday, Raffi Williams, deputy press secretary for the Republican Party, tweeted, “Woman Suing Jeffrey Epstein For Sexual Slavery Claimed Bill Clinton Must Have Known” and linked to a post that in turn referred to a Daily Mail story from 2011. The Drudge Report went for the more sensational “BUBBA AND THE PALM BEACH PEDOPHILE” and linked to the same story. Conservative viral news sites Twitchy and IJReview piled on, as did pundits at conservative websites, including Breitbart and the Blaze.

What has the right in a tizzy is a six-year-old lawsuit against Jeffrey Epstein, a former Democratic donor who has been accused of luring underage girls to his island resort to give massages before ultimately sexually assaulting them. Epstein, a billionaire hedge fund manager, pleaded guilty in 2008 to soliciting an underage woman and served 13 months in prison. But unsealed court documents revealed that he had been the subject of a much larger federal probe into alleged prostitution and could have faced 10 years in prison or more, if the case had gone forward. After his guilty plea, two of his alleged victims, who had were underage at the time of their encounter with Epstein, sued him in federal court, claiming that he had a “sexual preference and obsession for underage girls” and that he had sexually assaulted them (and many others). Epstein has consistently denied criminal wrongdoing and downplayed his 2008 conviction, telling the New York Post that he is “not a sexual predator.”

Last week a new anonymous allegation was introduced in the case, with a court filing charging that Prince Andrew, Queen Elizabeth’s second son, had sexually abused an underage girl when he was a guest at Epstein’s house in the US Virgin Islands. (Prince Andrew has denied any wrongdoing.) And on Monday, The Smoking Gun resurfaced old court documents revealing that Epstein’s phone book included telephone numbers and email addresses for Bill Clinton. (“Now that Prince Andrew has found himself ensnared in the sleazy sex slave story of wealthy degenerate Jeffrey Epstein, Bill Clinton can’t be too far behind,” the site declared.)

Clinton’s relationship with Epstein is old news. It’s long been publicly known that Clinton and other notable figures hobnobbed with Epstein. Still, the new headlines the case has generated have given GOPers a fresh opportunity to try to link Clinton to a sex scandal. Williams, the GOP spokesman, was attempting to draw attention to a three-year-old story that does not implicate Clinton in any lawbreaking. That article, which relies on court documents, recounts the story of Virginia Roberts, who alleged that she became Epstein’s sex slave at the age of 15 and that Clinton had once had dinner with Epstein and two girls whom she believed were underage (but she didn’t know their ages). But, according to the Daily Mail, Roberts said that “as far as she knows, the ex-President did not take the bait.” Roberts did say that she believed Clinton had to have been aware of Epstein’s alleged illegal activities, but provided no evidence to support her assumption.

Clinton and Epstein were indeed once close. The former president used Epstein’s private jet. And the presence of numerous teenage girls on the  financier’s private island might have struck a visitor as unusual or even troublesome. But there certainly was a compelling reason for a politician not to ask too many questions: Epstein had given tens of millions of dollars to political and philanthropic causes. And there’s another ingredient to the case that makes it a less-than-natural fit for political point-scoring—one of Epstein’s lawyers during his criminal case was none other than Kenneth Starr, whose investigation in the Clinton White House produced the Lewinsky scandal.

With GOPers always eager for more soap opera material on the Clintons, don’t expect this story and its (so far) thin Clinton connection to go away quietly.