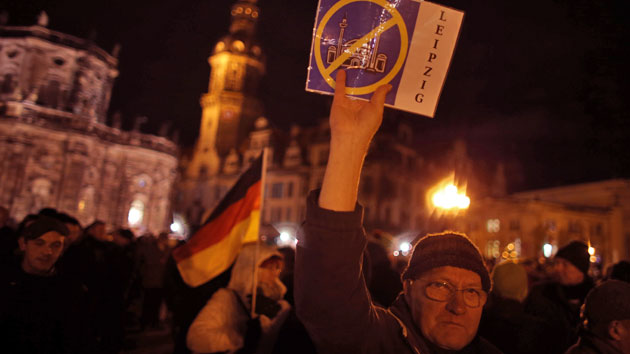 For two Mondays in a row, Dresden was the scene of massive protests against the growing number of Muslims living in Germany. The first, attracting about 18,000 supporters, happened two days before the attack in Paris on Charlie Hebdo, and the second was this week. The anti-immigration protesters, who call themselves PEGIDA (Patriotic Europeans Against the Islamization of the West), were claiming they had gathered to promote nationalism and call for the protection of German culture.

But waving German flags and brandishing posters that demanded “Homeland Protection Not Islamization,” the demonstrators in Dresden slammed asylum-seekers from Muslim regions for abusing Germany’s welcoming policies toward refugees and for tainting the culture of Germany. Dresden is home to a small percentage of foreigners, but after France, Germany hosts the largest population of Muslims in Western Europe—as many as 4.3 million, according to a 2009 estimate published in Germany’s Federal Republic.

Thousands of counterprotesters have appeared at the demonstrations staged by PEGIDA across Germany in recent months and have advocated tolerance and support for Muslim immigrants. But, prior to this week, PEGIDA supporters have easily outnumbered them; since its founding in October 2014 by Lutz Bachmann, a former petty criminal who now runs a public relations firm, the group has quickly grown in force and number. These anti-immigrant rallies have caused much debate and concern in Germany, but PEGIDA supporters may not realize that their protests have unintended consequences: Radical Islamist groups see their case against the West bolstered and legitimized by PEGIDA and other anti-Muslim protesters. PEGIDA’s actions allow radical Islamists to claim the West is hostile to Muslims—the argument used by radical groups such as ISIS to recruit disenfranchised, angry youths in search of a cause.

National security and terrorism experts point out that even though PEGIDA’s anti-Muslim events may not directly boost the recruitment efforts of ISIS and other jihadist groups, it has fueled a dynamic that undermines the fight against terrorism. “This is truly a vicious cycle,” explains Brian Forst, a professor of justice, law, and criminology at American University. “Anti-immigration sentiments aimed primarily against Muslims in the West breed alienation among Muslims, and alienation breeds extremism and acts of terror, which only aggravate anti-Muslim sentiments and behaviors…Terrorism succeeds when the victim reacts badly.”

National security experts note that PEGIDA’s public demonstrations add to a climate that can be exploited by jihadists seeking recruits. “These protests create a further sense of disenfranchisement on the part of Muslim youth,” says Arie Kruglanski, a University of Maryland psychologist and terrorism expert. “So the result is further polarization of European societies and further rift…a clash of civilizations.”

In a report for the Carnegie Endowment for International Peace, Marc Pierini, an expert on the Middle East and Europe, described the recruitment of Europeans by ISIS: “Of the Islamic State’s European followers, many are born Muslims, while some are converts…Problems of social exclusion, religious tensions, and political frustrations provide fertile ground for recruiting of young people.” Protests like PEGIDA’s only serve to deepen the  social divide, providing ISIS and other radical groups vivid images to support their causes.

A 2005 Congressional Research Service report focusing on England, France, Germany, and Spain noted that “social deprivation, discrimination, and a sense of cultural alienation may make some European Muslims—especially those of the second or third generation—more vulnerable to extremist ideologies.”

A spokesman from Germany’s embassy in Washington dismisses these concerns, however, and says PEGIDA is merely a “local phenomenon” and incapable of affecting recruitment efforts for ISIS. “Whoever is ready to join ISIS will join ISIS without a PEGIDA,” he says.

A local gang of protesters can nonetheless have international impact, observes Michael O’Hanlon, a national security expert at the Brookings Institution. “Anger and a sense of rejection can contribute [to joining ISIS],” he says. “Heaven knows there have already been lots of European jihadists who have gone to Syria, tragically.”

Following the massacre of 17 people around Paris last week, PEGIDA predicted record numbers would show up Monday night to support its cause. “The Islamists, against whom PEGIDA has been warning over the last 12 weeks, showed in France today that they are not capable of (practicing) democracy but instead see violence and death as the solution,” PEGIDA declared on its Facebook page. Analysts agreed with these predictions, suggesting that the numbers of anti-Islam protesters would swell by the thousands.

The attacks do appear to have bolstered the already strong opposition to PEGIDA, as Germans refuse to let PEGIDA take advantage of the Paris tragedy to point to radicalism in all Muslim communities. According to spectators in Germany on Twitter on Saturday, including journalists and bystanders, more than 30,000 people took to the streets across Germany, from Dresden to Liepzig, to protest PEGIDA. Here are a few tweets from people who say they witnessed the actions.

Nonetheless, Monday’s PEGIDA rallies drew a record number of about 25,000 anti-Islam protesters, who took to the streets in defiance of German politicians asking them to stay home in light of the Paris massacre.