In this week’s New Yorker, Alec MacGillis discusses Jeb Bush’s approach to education reform, the realm in which Bush, as Florida’s governor, had sought to make his biggest mark. In 1995, his efforts to improve the state’s public schools catalyzed his political career and, later, fueled competition with his brother George, who as president rolled out the No Child Left Behind Act:

Jeb Bush made it known that he thought his own approach superior, because it sought to grade schools on improvements in individual students’ scores, rather than just on schools’ performance in a given year. “There were lots of conversations about the work in Texas and how Florida had improved on that,” [school superintendent Jim] Warford said. According to education officials, Jeb’s team had little respect for Rod Paige, the former Houston schools superintendent whom George W. Bush had named Secretary of Education. “It was a little prickly in Florida,” Sandy Kress, who worked on the implementation of No Child Left Behind, said. “It was ‘We’re going to do it our way and can do it better.'”

Their sibling rivalry notwithstanding, the Bush bros have common ties to one particularly controversial educational entrepreneur. Starting in the late 1990s, Randy Best, whom I profiled at the end of George W. Bush’s second term, used his connections to the president to transform a virtually unknown for-profit education company, Voyager, into a “selling juggernaut” (in his words) that he unloaded in 2005 for $360 million. 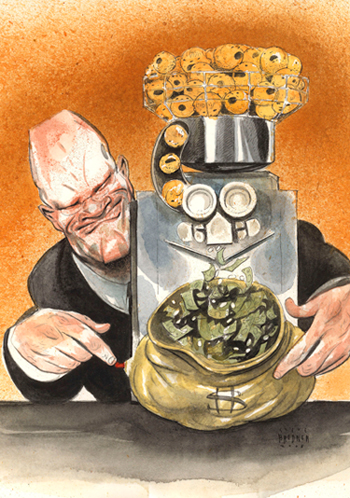 The key to Voyager’s success was the way it it used revolving doors in Bush’s Education Department to game the procurement process. Its dealings prompted a scathing DOE inspector general’s report in 2006 and a harshly worded Senate report the following year. “Many programs, including Voyager, were probably adopted on the basis of relationships, rather than effectiveness data,” G. Reid Lyon, who co-wrote the No Child Left Behind Act and later consulted for Best, told me in 2008. “I thought all this money would be great; it would get into schools. But money makes barracudas out of people. It’s an amazing thing.”

The controversy surrounding Voyager didn’t dissuade Best from starting another education company. Founded in 2005, Academic Partnerships persuades colleges to outsource to the firm their degree programs in subjects such as business and education, which it puts online in exchange for a hefty chunk of the profits. Nor did Voyager dissuade Jeb Bush from partnering with Best. Here’s MacGillis:

Best needed someone to lend credibility to the company. Florida had spent heavily on Voyager during Jeb Bush’s governorship, and, in 2005, when Bush was still in office, Best spoke with him about going into the education business. By 2011, Bush had joined Academic Partnerships as an investor and an adviser, and he became the company’s highest-profile champion. Best told the Washington Post that Bush’s annual salary was sixty thousand dollars, but he did not disclose the terms of Bush’s investment stake. For the first time, Bush was making money in an educational enterprise.

Last month, after announcing his intent to run for president, Bush resigned from Academic Partnerships and several other business affiliations. Yet if Bush’s family history is any guide, Randy Best 2.0 is just getting started.