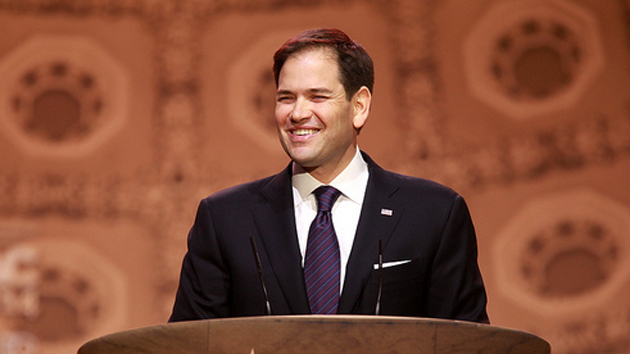 Sen. Marco Rubio’s (R-Fla.) obligatory presidential aspirant book, American Dreams: Restoring Economic Opportunity for Everyone, is out this week. National Review has published an excerpt in which Rubio draws on his experience as a part-time college professor teaching political science at Florida International University to make the case that the car service app Uber is America’s best argument for deregulation. He writes:

The students in my class were genuinely intrigued by this innovative service and wondered why they didn’t have it in Miami…Politicians, I said, had passed rules to stifle competition that might threaten their constituents and supporters in the existing taxi and sedan-service industry…As my progressive young students listened to me explain why government was preventing them from using their cell phones to get home from the bars on Saturday night, I could see their minds change.

Rubio, realizing that he’d converted “a bunch of 20- and 21-year-old anti-regulatory activists,” goes on to claim that government regulation too often stifles innovative “little guys” like Uber—”little guy” being a relative term, in this case, when referring to a company that worth a reported $40 billion.

Other Republicans, including Newt Gingrich, have voiced support for Uber, but Rubio has been the GOP’s most vocal and prominent Uber advocate. Last spring, Rubio gushed praise for the company while touring its DC offices. Following the senator’s lead, the Republican National Committee released a petition last August asking people to support “innovative companies like Uber” against bullies in the government and taxi unions. “I can’t overstress the importance of finding a real-life example for us to contrast what we believe in with what the other party believes in,” RNC spokeswoman Kirsten Kukowski told Townhall about the petition effort. The implication was clear: Democrats want to choke the life out of the sharing economy by overregulating services like Uber and Airbnb, while Republicans want to see them thrive.

Republicans certainly have an incentive to align themselves as the official party of the sharing economy. They see it as a chance to win back the tech-savvy young voters who’ve spurned much of the GOP platform in the past. Democrats, unsurprisingly, see it as “pandering.”

The strategy ignores some Uber realities. Without tougher regulations on driver background checks, for example, the already lengthy list of violent and abusive behavior by Uber drivers could grow longer. Some low points from the past two years: An Uber driver with a prior felony conviction was charged with battery of a passenger, another one took a Los Angeles woman 20 miles out of the way to an abandoned parking lot, and another driver beat a passenger in San Francisco—with a hammer. In response to concerns over safety, former Massachusetts Gov. Deval Patrick pushed for more thorough background checks for drivers—a dreaded regulation for Uber that might be popular among some of Rubio’s former students.

But even if Uber remains a symbol of free enterprise and entrepreneurship, it’s close to becoming seen as an enemy of free speech and the press. Last November, Uber senior vice president Emil Michael suggested digging up dirt—“your personal lives, your families”—on journalists who produced coverage critical of the company. Some argued the issue was overblown, but ultimately the incident earned Uber a few enemies within the press. The company made a sharp U-turn after it was criticized, saying later that it was not going after journalists, but rather against its opponents in the taxi business.

Uber’s rapid expansion from tech upstart to indisputable giant could present a catch-22 for Rubio. In its quest to stave off regulation, Uber has hired a legion of lobbyists—including former Obama campaign manager David Plouffe—to achieve its goals. “More often than not, big business co-opts big government—and vice versa—and they work together,” Rubio writes in his book. He’s referring to how regulations help entrenched interests, but his argument can apply to Uber’s push for deregulation too. “After all,” he writes, “big corporations can afford to influence government, and the little guys can’t.”