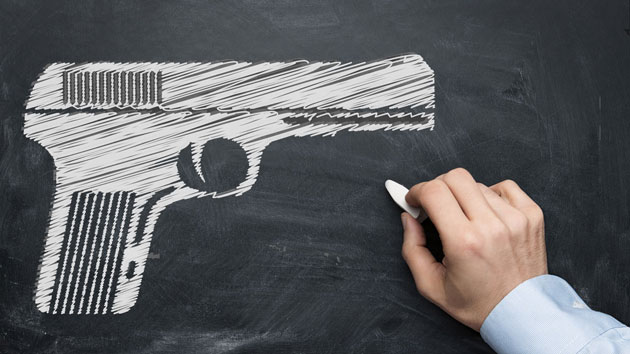 In August of last year, a 16-year-old high-schooler in Summerville, South Carolina, turned in a creative writing assignment about shooting his neighbor’s pet dinosaur. The school’s “zero tolerance” policy for guns prompted a search of the student’s belongings that turned up no weapons. Nonetheless, he was arrested and suspended for what he said was a joke, if one in questionable taste.

South Carolina state Rep. Alan Clemmons hopes to use that incident to force public schools to dedicate three weeks each year to teaching a gun-focused curriculum developed or recommended by the National Rifle Association. Traditionally, zero tolerance policies have applied to students bringing weapons to school or simulating their use with toys or hand gestures—not to academic discussion of guns. Still, in the bill Clemmons filed in the state legislature last month he states that these NRA-approved lessons are needed to combat an “intolerance for any discussion of guns or depiction of guns in writing or in assignments in public schools, which is an affront to First Amendment rights and harshly inhibits creative expression and academic freedom.”

“If anything comes up in a school setting that has to do with firearms, then it’s a suspendable offense and criminal charges could ensue,” Clemmons told WMBF News. “The second amendment should be freely debated in schools and instead the second amendment is being squelched in our schools.”

If passed, the Second Amendment Education Act would require that three consecutive weeks of each year in elementary, middle, and high school be spent studying the second amendment. As Ian Millhiser at Think Progress points out, that’s an enormous chunk of the school year, especially given that some South Carolina schools devote just two weeks to slavery and a week and a half to World War II.

“Even amongst a conservative constituency in South Carolina, I think they can rate that they have more abiding problems than this.”

The law would also require that every December 15—the day after the anniversary of the mass shooting at Sandy Hook school in Newtown—be designated “Second Amendment Awareness Day.” To celebrate the occasion, schools will be required to hold mandatory poster or essay contests at every grade level, with the theme “The Right To Bear Arms; One American Right Protecting All Others.” The South Carolina Legislative Sportsmen’s Caucus will be in charge of choosing first, second, and third place winners in both contests.

Both chambers of South Carolina’s legislature are Republican-controlled, and Gov. Nikki Halley has an A+ rating from the NRA. Still, this bill may be too extreme to pass:

“Even amongst a conservative constituency in South Carolina, I think they can rate that they have more abiding problems than this,” says Dr. Dave Woodard, a political science professor at Clemson University who’s long served as a political consultant to Republican candidates in South Carolina.

“Most people are more concerned with math and science, and the fact that historically, South Carolina’s rankings in education have been abysmal. Nobody, I think, would say ‘The best way to improve education is to have a three-week segment on the Second Amendment. Boy, that’ll move us up in the national rankings!'” says Woodard.

The bill includes a list of gun-related topics that must be worked into the curriculum. Several—including the individual right to bear arms—are straight out of the revisionist interpretation of the Second Amendment that the NRA and its supporters have helped popularize since the 1970s.

The curriculum would require students from first grade and up to get into the weeds of constitutional scholarship on the Second Amendment. Students will be asked to study Supreme Court cases “including the United States v. Cruikshank, the United States v. Miller, the District of Columbia v. Heller, and McDonald v. Chicago.” (The majority arguments in Heller and McDonald grew out of the push by pro-gun researchers to redefine the Second Amendment.) The bill also mandates that students learn about “the constitutionality of gun control laws,” the causes of mass shootings, and “the impact of legislative reactions to gun violence on Constitutional rights and the impact on reducing gun violence, if any.”

Clemmons identifies as a Second Amendment advocate. He has repeatedly received an A rating from the NRA, and has taken part in events with the group in his state. In 2013, he was featured on the NRA’s website after taking a trip to Connecticut to convince gun manufacturers, put off by tightening gun control legislation in the state post-Newtown, to move their operations to South Carolina.

It’s unclear if Rep. Clemmons or his cosponsors have hashed out the logistics of the NRA’s involvement in developing or approving a curriculum: Jennifer Baker, a spokeswoman for the NRA, tells Mother Jones that the NRA has not made any recommendations on the syllabus envisioned by the bill, nor have South Carolina legislators made plans with the NRA about the group’s future role. Attempts by Mother Jones to contact Rep. Clemmons have not been answered, but we will update this story if we receive a response.