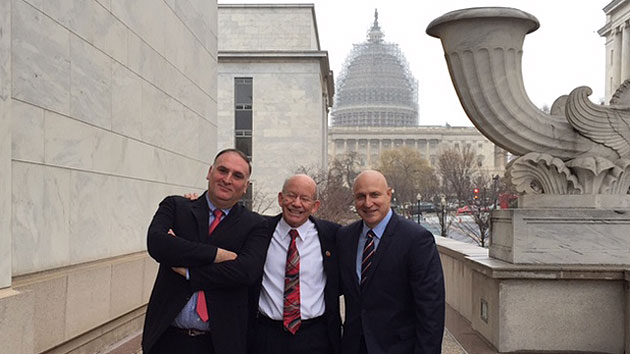 On a fall day in a congressional office bedecked with University of Oregon (Go Ducks!) paraphernalia, Tom Colicchio and Rep. Peter DeFazio (D-Ore.) were getting on like old college buddies.

Up on Alaska’s Mohawk River, the congressman insisted, you can still spear salmon with a pitchfork. “I was in Juneau half an hour and caught 30 fish,” countered Colicchio, the smooth-domed celebrity chef, who’d chosen a navy blazer for the occasion. “I said, ‘Nah, this isn’t fun anymore, this is boring.'” But Colicchio, the head judge on Bravo’s Top Chef and founder of the New York City restaurants Gramercy Tavern, Craft, and Colicchio & Sons (his boys are 3, 5, and 21)—wasn’t here simply for the pleasantries.

“Where did all the states’ rights people go? I want them! They’re somewhere in this building!”

More than 700 chefs had already signed a petition supporting a DeFazio-sponsored bill, currently stalled in the House with 67 cosponsors, that would require food manufacturers to disclose their GMO ingredients. A subset of the signatories were on the Hill to lobby legislators and staffers. “As chefs, we know that choosing the right ingredients is an absolutely critical part of cooking,” the petition reads. “But when it comes to whether our ingredients contain genetically modified organisms, we’re completely in the dark.” The chefs were joined by reps from activist groups—including Food Policy Action, the Center for Food Safety, a national campaign called Just Label It, and the Environmental Working Group—to address the issues of transparency, food safety, and the massive amounts of money ($36 million in the last election) the food industry has spent fighting GMO-labeling initiatives.

Invited to observe the meeting with DeFazio, I took advantage of the chance to give Colicchio a light grilling. Here are a few tidbits Colicchio gave me on some of his favorite topics:

On states rights: “We typically label things not because they’re dangerous. If they’re dangerous, we take them out of the food supply. But we believe everything in our processed foods should be labeled.? Like some labels say “modified food starch.” Why modified? It’s been altered. I’m not asking for a skull and crossbones—simply a line in the ingredient list that says ‘GMO corn.’ That’s it!

“We’re not debating the science of GMOs, but I would say there’s an ever-increasing environmental issue because of the overuse of herbicides. If you look at the health of the soil, if you care about the environment, how much carbon is in the ground, you wanna know what’s in your food.? This is a recent development, where people in the food industry are starting to care about the policies behind these issues. Typically consumers who care about food, they’re not thinking about policy. Like when they go to a farmers market, they’re probably paying more—there are policies that are keeping those foods more expensive than processed ones. I don’t quite understand how people who care about states’ rights all of the sudden don’t believe states have a right to label. Those same people will say the states have a right to raise animals a certain way. Where did all the states’ rights people go? I want them! They’re somewhere in this building!”

“The only thing I do remember is my older brother would constantly steal the food off my plate.”

On customer confusion: “I always use this example: It’s summer, and you go into the supermarket and see all the beautiful strawberries. One is labeled local. One is labeled organic and ‘made in Chile’—it’s GMO free, but people don’t know that. People will go, ‘Oh, that one’s local, so I’ll buy that.’ That lack of transparency puts the organic farmer at a competitive disadvantage.”

On getting his kids thinking about (and actually eating) good food: “I find that the trick to get them to eat is to bring them shopping. I started gardening this year, and they are so interested in watching stuff grow. And I want to teach them patience, because they’re so focused on immediate response of hitting a button and something happens. My older son really loves food and really cares about it. He isn’t into policy yet, but we had a food policy booth set up at Lollapalooza, and he manned it this year because I couldn’t get there. I had to entice him with lots of free music.”

On his own childhood dinners: “We had a family that had to be at the table at a certain time every single night. I don’t think I was a picky eater. I don’t remember. The only thing I do remember is my older brother would constantly steal the food off my plate.”

On his earliest cooking mishap:? “I would bake a lot with my grandmother. I grew up in a four-family home in New Jersey. There were two homes on the plot and my grandparents lived in the other building. So I made this blueberry pie and I had to walk it a couple hundred yards to the side house. We’re on the second floor, and my grandmother insisted that I put it in a brown paper bag and hold it straight. I kept saying, “Oh, it’ll be okay.” I run home, upstairs. I take it out, big moment, and the blueberries all flew out of the pie!”