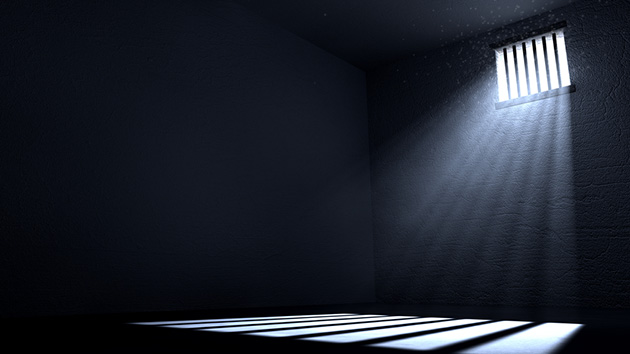 The United States has a prison problem. We have just 5 percent of the world’s population but 25 percent of its prisoners. Even though our imprisonment rate has grown more than 400 percent since 1970, locking people up has not proved to be a deterrent.

The prison problem also extends to jails, which hold defendants awaiting trial and prisoners sentenced for minor offenses. A new report from the Vera Institute of Justice, a nonprofit focused on justice policy, reports that America’s local jails, which hold roughly 731,000 people on any given day, are holding more people even though the crime rate is going down. Jails disproportionately detain people of color longer and for lesser crimes. The report also finds that jails are less likely to give inmates the rehabilitation and mental-health support that could keep them out of prison. 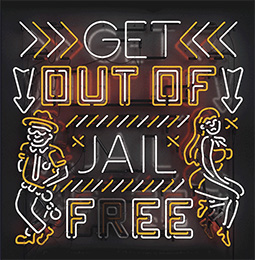 Inside the Wild, Shadowy, and Highly Lucrative Bail Industry

“I observe injustice routinely. Nonetheless even I—as this report came together—was jolted by the extent to which unconvicted people in this country are held in jail simply because they are too poor to pay what it costs to get out,” writes Vera president and director Nicholas Turner. He described poor detention practices in which the mentally ill, homeless, and substance abusers are routinely jailed for bad behavior and described the practice as “destructive to individuals, their families, and entire communities.”

The 46-page report paints a devastating portrait of American jails. Here are a few quick takeaways:

1. The number of people going to jail is going up while crime rates are falling: In 1983, roughly 6 million people were admitted to a local jail. That number grew to roughly 11.7 million in 2013. Meanwhile, crime rates have been dropping. See Vera’s chart: 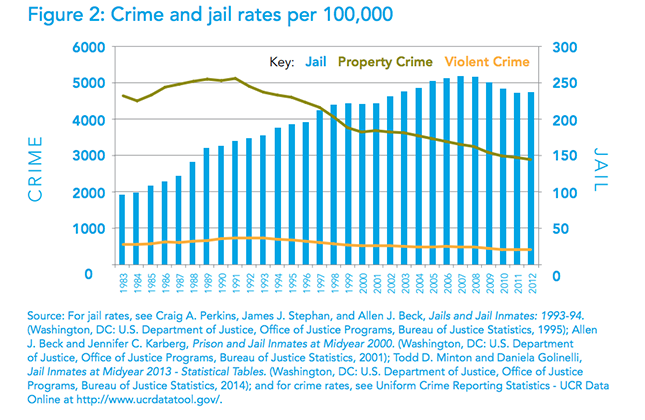 Jail admissions rates include people who’ve gone to jail more than once—recidivism is a separate, but related issue—but even factoring that in, more people are going to jail. The report speculates that this is tied to arrests for drug crimes: In 1983, drug defendants and inmates made up less than 10 percent of local jail populations but by 2002 they accounted for 25 percent.

2. Jail time is getting longer: Once people land in jail, their average stay has increased nearly 65 percent, from 14 days to 23. This statistic doesn’t distinguish between pretrial detention and those serving actual jail terms, but, as the report notes, “the proportion of jail inmates that are being held pretrial has grown substantially in the last thirty years—from about 40 to 62 percent—it is highly likely that the increase in the average length of stay is largely driven by longer stays in jails by people who are unconvicted of any crime.”

3. People who go to jail often work less and earn less after getting out: Spending any time in jail can, and usually does, significantly alter someone’s ability to lead a normal life upon release. Plus, many jail inmates have to pay fees for laundry service, room and board, and even booking fees. Even if they’re later found innocent, they still must pay those bills, leaving many former defendants indebted to the system. 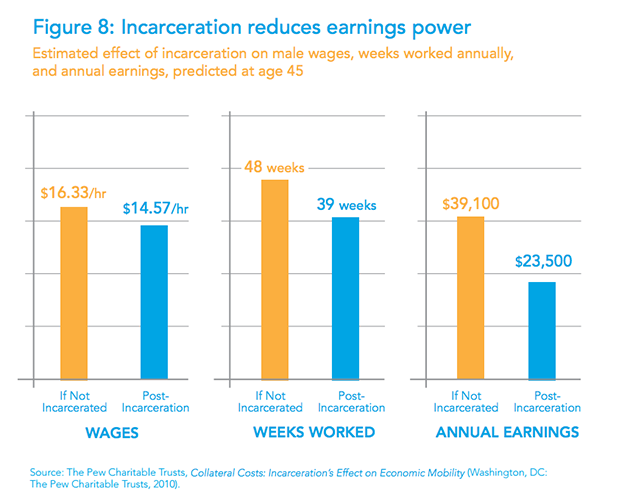 Consider Kevin Thompson, a Georgia man who had been jailed once and was jailed again for not paying $838 in traffic fines, court fees, and probation fees to a private probation company.

4. Lack of money is the main reason defendants sit in jail: The report comes to a depressing, if not surprising, conclusion: “Money, or the lack thereof, is now the most important factor in determining whether someone is held in jail pretrail. Almost everyone is offered monetary bail, but the majority of defendants cannot raise the money quickly or, in some cases, at all.” This leads to situations where people are stuck in jail for minor offenses. A 2010 Human Rights Watch report found that in about 19,000 criminal cases in New York City, many people couldn’t afford bail set at $1,000 or less. In some cases, the accused pled guilty early to get out of jail, even if they were innocent.

5. Society’s race problems are amplified by the local jail dynamic: The Vera report notes that about 38 percent of felony defendants will spend their entire pretrial periods in jail, but only one in 10 were denied bail in the first place. The rest, many of whom are African American men, simply can’t afford to post bail: “Black men appear to be caught in a cycle of disadvantage: incarcerated at higher rates and, therefore, more likely to be unemployed and/or in debt, they have more trouble posting bail.”