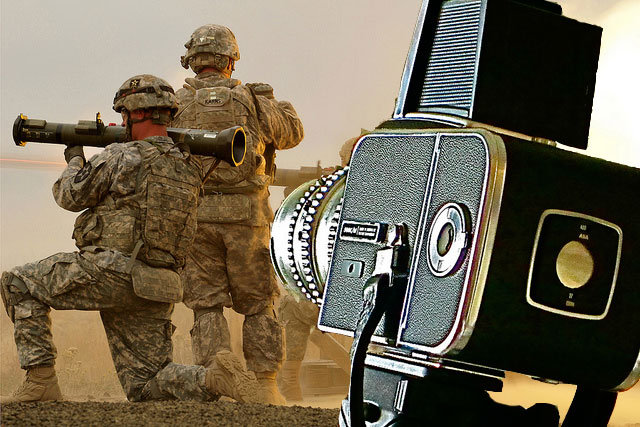 In the age of the all-volunteer military and an endless stream of war zone losses and ties, it can be hard to keep Homeland enthusiasm up for perpetual war. After all, you don’t get a 9/11 every year to refresh those images of the barbarians at the airport departure gates. In the meantime, Americans are clearly finding it difficult to remain emotionally roiled up about our confusing wars in Syria and Iraq, the sputtering one in Afghanistan, and various raids, drone attacks, and minor conflicts elsewhere.

Fortunately, we have just the ticket, one that has been punched again and again for close to a century: Hollywood war movies (to which the Pentagon is always eager to lend a helping hand).American Sniper, which started out with the celebratory tagline “the most lethal sniper in US history” and now has the tagline “the most successful war movie of all time,” is just the latest in a long line of films that have kept Americans on their war game. Think of them as war porn, meant to leave us perpetually hyped up. Now, grab some popcorn and settle back to enjoy the show.

There’s Only One War Movie

Wandering around YouTube recently, I stumbled across some good old government-issue propaganda. It was a video clearly meant to stir American emotions and prepare us for a long struggle against a determined, brutal, and barbaric enemy whose way of life is a challenge to the most basic American values. Here’s some of what I learned: our enemy is engaged in a crusade against the West; wants to establish a world government and make all of us bow down before it; fights fanatically, beheads prisoners, and is willing to sacrifice the lives of its followers in inhuman suicide attacks. Though its weapons are modern, its thinking and beliefs are 2,000 years out of date and inscrutable to us.

Of course, you knew there was a trick coming, right? This little US government-produced film wasn’t about the militants of the Islamic State. Made by the US Navy in 1943, its subject was “Our Enemy the Japanese.” Substitute “radical Islam” for “emperor worship,” though, and it still makes a certain propagandistic sense. While the basics may be largely the same (us versus them, good versus evil), modern times do demand something slicker than the video equivalent of an old newsreel. The age of the Internet, with its short attention spans and heightened expectations of cheap thrills, calls for a higher class of war porn, but as with that 1943 film, it remains remarkable how familiar what’s being produced remains.

Like propaganda films and sexual pornography, Hollywood movies about America at war have changed remarkably little over the years. Here’s the basic formula, from John Wayne in the World War II-era Sands of Iwo Jima to today’s American Sniper:

A Fantasy That Can Change Reality

But it’s just a movie, right? Your favorite shoot-em-up makes no claims to being a documentary. We all know one American can’t gun down 50 bad guys and walk away unscathed, in the same way he can’t bed 50 partners without getting an STD. It’s just entertainment. So what?

So what do you, or the typical 18-year-old considering military service, actually know about war on entering that movie theater? Don’t underestimate the degree to which such films can help create broad perceptions of what war’s all about and what kind of people fight it. Those lurid on-screen images, updated and reused so repetitively for so many decades, do help create a self-reinforcing, common understanding of what happens “over there,” particularly since what we are shown mirrors what most of us want to believe anyway.

Learning From the Exceptions

In propaganda terms, think of this as controlling the narrative. One version of events dominates all others and creates a reality others can only scramble to refute. The exceptions do, however, reveal much about what we don’t normally see of the true nature of American war. They are uncomfortable for any of us to watch, as well as for military recruiters, parents sending a child off to war, and politicians trolling for public support for the next crusade.

War is not a two-hour-and-12-minute hard-on. War is what happens when the rules break down and, as fear displaces reason, nothing too terrible is a surprise. The real secret of war for those who experience it isn’t the visceral knowledge that people can be filthy and horrible, but that you, too, can be filthy and horrible. You don’t see much of that on the big screen.

So here’s a question: if the core propaganda messages the US government promoted during World War II are nearly identical to those pushed out today about the Islamic State, and if Hollywood’s war films, themselves a particularly high-class form of propaganda, have promoted the same false images of Americans in conflict from 1941 to the present day, what does that tell us? Is it that our varied enemies across nearly three-quarters of a century of conflict are always unbelievably alike, or is it that when America needs a villain, it always goes to the same script?

Peter Van Buren blew the whistle on State Department waste and mismanagement during the Iraqi reconstruction in his first book, We Meant Well: How I Helped Lose the Battle for the Hearts and Minds of the Iraqi People. A Tom Dispatch regular, he writes about current events at his blog, We Meant Well. His latest book is Ghosts of Tom Joad: A Story of the #99Percent. To stay on top of important articles like these, sign up to receive the latest updates from TomDispatch.com

Follow TomDispatch on Twitter and join us on Facebook. Check out the newest Dispatch Book, Rebecca Solnit’s Men Explain Things to Me, and Tom Engelhardt’s latest book, Shadow Government: Surveillance, Secret Wars, and a Global Security State in a Single-Superpower World.