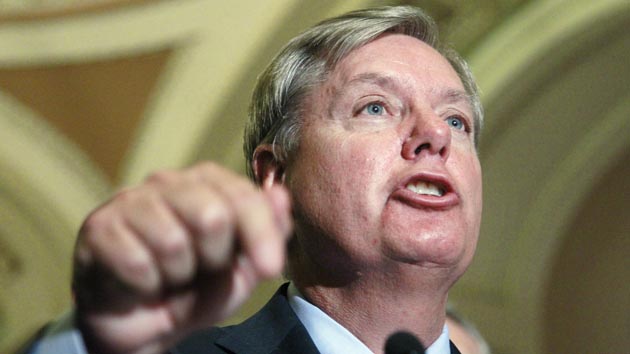 As 2016 Republican presidential hopefuls have kick-started their pre-primary, not-yet-official campaigns, a burning question has arisen: Why is Lindsey Graham, a Republican senator from South Carolina with little national following and no hope of securing the nomination, saying that he may toss his hat in the ring? At the end of January, Graham announced his exploratory committee, but he has told reporters that an official announcement won’t come until he knows that he has enough financial backing to run.

Graham doesn’t seem a natural contender. The tea party scoffs at his bipartisan bona fides. His hawkish war rhetoric and interest in foreign policy endears him to Republican senators like close pal John McCain, as well as Kelly Ayotte and the neocon crowd, but this doesn’t offer him much of a launchpad. His fundraising prospects don’t seem strong, though the pro-Israel casino magnate Sheldon Adelson co-chaired a fundraising lunch for Graham at the Capitol Hill Club last week. Graham introduced a bipartisan bill that would ban online gambling, Adelson’s pet cause. Most political analysts, including Clemson University political scientist Dave Woodard, have ruled Graham out of the running already. And MSNBC’s Benjy Sarlin posits that Graham is just trying to undercut Kentucky Sen. Rand Paul regarding his skepticism toward military intervention overseas.

Yet some political strategists suggest that Graham has a target other than the White House.

“He’s running for secretary of defense,” says Rick Wilson, a GOP strategist in Florida with experience in South Carolina politics. “He’ll never say it, but if you know him well enough, it’s the only logical reason. He’ll make sure foreign policy is a central focus” of his campaign.

“If the Republicans win the White House, Lindsey Graham will have his choice of being secretary of defense or secretary of state, if he does it right,” Katon Dawson, Graham’s longtime friend and the former chair of the South Carolina Republican party, told National Review.

So what would doing “it right” mean?

Graham is popular in his home state of South Carolina, which is one of the three pivotal early states in the primary race. Wisconsin Gov. Scott Walker, another 2016 wannabe, is just 1 percent ahead of Graham in early polls of the state. But if Graham does poorly in Iowa and New Hampshire and drops out of the race, he could use his influence in the Palmetto State to benefit another candidate during the primary there. Should that candidate win, Graham’s wealth of foreign policy, military, and national security expertise could lead to his campaign work being rewarded, Wilson says.

Graham says he’s focusing on his “vision for the country and national security,” rather than on defeating other candidates. His PAC is called Security Through Strength, and it is largely dedicated to the fight against radical Islam and ISIS. Whenever a Republican leader is needed to talk about defense or foreign policy on the Sunday morning political programs, Graham is one of the top choices. He routinely appears on Meet the Press, Fox News, and CNN.

Political strategists say that they would be surprised if Graham campaigned negatively against other candidates. “The last thing Marco Rubio and Rand Paul worry about is Lindsey Graham,” Wilson says. Rob Wislinkski, a strategist from Graham’s home state, agrees: “I’d be very surprised if he throws a lot of rocks at the other candidates in the GOP,” he says. And Graham told MSNBC that Rand Paul’s potential bid has “zero” to do with his decisions, hesitating to bad-mouth the Kentucky senator.

Then again, maybe Graham thinks lightning will strike. Larry Sabato, managing editor of the University of Virginia’s Center for Politics’ Crystal Ball blog, suggests that Graham may be catching the presidential fever that afflicts many long-time senators: deciding you can do the job better after having watched several presidents in action. “They start whistling ‘Hail to the Chief’ while shaving,” Sabato says.

Graham’s camp is adamant that he actually wants the top job. “If [he] decided to formally enter the race, he is running to win,” says Christian Ferry, a Virginia GOP strategist who is advising Graham.

Maybe. But if Graham is merely trying to gain an edge in the postelection Pentagon sweepstakes, the experience of retiring Defense Secretary Chuck Hagel might be a cautionary tale, Sabato notes. For all the power of the position, the top Pentagon job involves losing the independence that senators enjoy. But for Graham, being named secretary of defense could be a powerful career capper, and a way to lay out his vision of a hardline national defense—something he probably won’t be doing from the Oval Office.