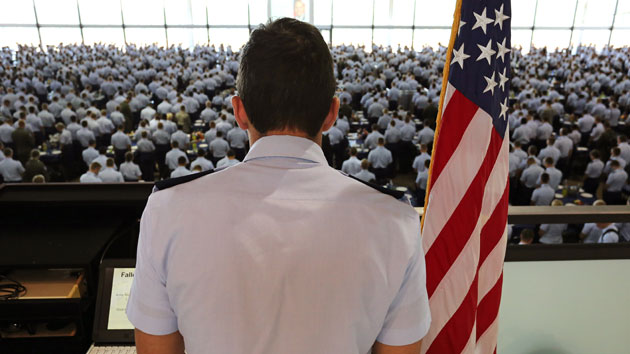 A junior officer at the Air Force Academy reads a speech to cadets about US troops recently killed in action and urging students and coaches to stand up to fight sexual assault on campus.Brennan Linsley/AP

Around two and a half years ago, a well-publicized sexual-assault scandal rocked the Air Force’s basic training program in San Antonio. Nearly 70 people came forward to accuse more than 30 training instructors of offenses including unwanted touching, inappropriate relationships, and rape. General Mark Welsh, the Air Force chief of staff, described sexual assault as a “cancer” infecting the culture of the base.

In the wake of the scandal, the Air Force set up 24-hour hotlines in dorms, launched leadership training for basic training instructors, increased the number of female training instructors, and implemented dozens of other changes. The Air Force has bragged about a reduction in sexual assaults, including at the Air Force Academy, where assaults dropped from 45 in 2013 to 27 in 2014. The entire military heralds higher reporting rates, and lower numbers in actual assaults that appeared in two recent surveys. But victims’ advocates, former military officers, and lawmakers assert that sexual assault in the military remains an epidemic, and that as long as victims’ commanders are responsible for initiating investigations for sexual assaults, victims will continue to find it difficult to report assaults and justifiably fear reprisals for doing so.

“They need to prosecute rapists,” says Paula Coughlin, the former US Navy lieutenant whose report of her own assault at the Tailhook convention in 1991 sparked one of the first major investigations into sexual abuse in the military. “Everything else is just fluffery.”

After having implemented 45 other recommendations, the Air Force will focus its effort to fight back against rape at the very beginning of military service with the Capstone Program, a five-day interactive course designed to instill the values of the Air Force with its trainees. They will learn the behavior of perpetrators; how to change negative behaviors “before a crime occurs”; how to help victims; the neuroscience of trauma; and what resources are available to victims, explains Lt. Colonel Kirsten Reimann, an Air Force spokeswoman. Some are optimistic about the course, including Rep. Joe Heck (R-Nev.), a former Army commander, who tells me it seems like “a good first step.”

But five days of training is unlikely to change the behavior of young people, says Dr. Stephen Xenakis, a retired Army brigadier general and psychiatrist who has worked extensively with young soldiers. “These courses can be okay for laying out the ground rules…but they don’t change attitudes,” he notes. Young people entering basic training come from various backgrounds, with different habits, dispositions, and value systems that probably won’t change after five days of training.

Retired Chaplain Colonel Herman Kaiser says that “morality training” has been around for his entire 40 years in the US Army and that he has been one of its instructors. He describes it as disjointed, “weak and subjective,” disliked by the instructors, and largely ineffective. He explains that the programs were ineffective because they lacked clear direction, didn’t change behavior, and often got mixed up in conflicting religious and ethical debates.

“Training programs are important, but they will not fix an inherently unfair system,” adds retired Colonel Don Christensen, a former military prosecutor who is now the president of Protect Our Defenders, a group that advocates for military victims of sexual assault.

Military regulations allow victims of sexual abuse to request health care and other services without revealing their identities. But if they choose to press charges, they must make a report to law enforcement or a supervisor first. However, according the Christensen, the culture of the military is to always report everything to your commander, from an illness to an assault. Moreover, during basic training, it’s nearly impossible to make an off-base phone call to law enforcement. The supervisor becomes the obvious choice.

That supervisor must then evaluate the complaint’s legitimacy and determine whether or not to move it up the chain of command. At this stage, many victims lose their nerve. Since most military sexual assaults occur within units, that supervisor is often the commander of both the victim and the accused—a fact that can lead to retaliation against people who report assaults. Sixty-two percent of respondents in a 2014 RAND Corporation survey of all service members who reported assaults said they experienced some social or professional retaliation after making the claim, including a reduction in rank, a decrease in pay, or being forced out of the military entirely.

“In the military, your rapists’ boss decides whether or not a sexual-assault allegation is investigated,” Christensen says. “This puts commanders in an impossible position.”

One reason commanders might brush off reports of assault or harassment is that they don’t want the black mark of a crime tainting their records, and there are few consequences for not reporting the crime. “Military justice implies it’s a requirement” to report rape, says Paula Coughlin, but “it isn’t enforced.” When Christensen was a prosecutor, commanders would constantly reschedule meetings and ignore phone calls to keep him from speaking with witnesses. In the past, including during the Lackland scandal, military officers who did not report instances of sexual assault were suspended or officially reprimanded, but rarely seriously charged.

A number of efforts have been made to address this problem through legislation, and the concern about the reporting chain has been a rallying cry for critics for more than two decades. For several years, Rep. Jackie Speier (D-Calif.) has sponsored the Sexual Assault Training Oversight and Prevention Act (STOP), which would implement a third-party oversight board composed of civilians and military personnel to take control of assault cases. We “cannot condone a system that is designed to protect the perpetrators and punish the survivors,” notes a press release on Speier’s website. The bill has 159 cosponsors, support from countless advocacy groups, and is currently stalled in committee. Sen. Kirsten Gillibrand (D-N.Y.) sponsored a similar bill, which didn’t pass the Senate.

But many in and out of the Air Force remain opposed to removing commanders from the sexual-assault adjudication process. The presence of outsiders when sensitive questions of sexual assault arise can often make the process “adversarial,” warns Xenakis. Instead, he argues, commanders should have more incentives for cracking down on sexual assault, and more severe punishment for ignoring it. “Commanders at senior levels understand that these things undermine the health of the whole force,” Xenakis says. “They need programs themselves to help them identify when these problems are happening.”

Colonel Charles Killion, the director of the Air Force’s judiciary wing, agrees, noting that the Air Force considered an independent oversight body but concluded that excluding the commander was not “going to have a positive impact on sexual assault reporting, investigations, or prosecutions.”

Capt. Jason Smith, a spokesman for the Air Force, points to the success of the Air Force efforts by noting that 30 months have passed since the last sexual misconduct conviction at Lackland. A lack of convictions might also suggest that victims continue to be afraid to come forward and that the process itself is still flawed. “If anyone believes that fewer convictions is a sign of success…they don’t understand the scope of the problem,” says victim advocate Paula Coughlin.