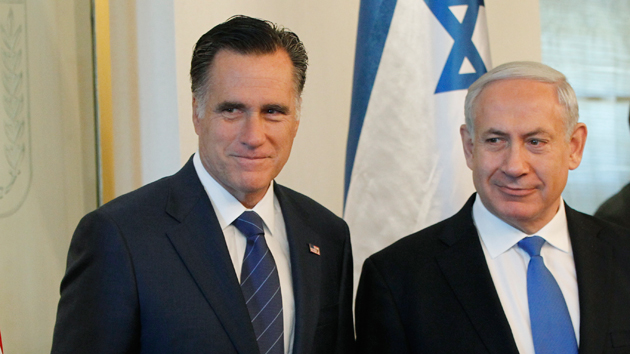 As Tuesday’s national elections in Israel neared, Prime Minister Benjamin Netanyahu, who was struggling to hold on to power, appeared to become more worried about his prospects and more desperate in his pitchmanship. Dropping all pretenses, he played the race card early on Election Day, posting a Facebook video with an explicit ethnic message: “Arab voters are coming out in droves to the polls.” The intent was obvious—to scare the hell out of right-wing and anti-Arab voters who had not yet hit the polls. This brazen move followed another brazen sop to the right. On Monday night, Netanyahu declared that if he were elected, he would never permit the establishment of a Palestinian state. With this last-minute pander, Netanyahu reversed his previous public position—announced in a 2009 speech—that he supported a two-state solution to the Israeli-Palestinian conflict.

His back-flip was not much of a surprise. It’s an indicator of what was widely suspected at home and abroad: Netanyahu never really believed in the two-state solution, which has the been the foundation of Mideast diplomatic initiatives for two decades. But this issue is bigger than Netanyahu. Conservatives in his Likud party and Republicans in the United States have played the same game for years: expressing support for the two-state solution without meaning it. Why would they do that? Because there is a strong international consensus in favor of the two-party path to peace. Those who don’t buy it are not part of the mainstream debate; they’re outside the tent. Consequently, many Israeli conservatives and their comrades in the United States—who truly don’t want a Palestinian state—have figured out that if they mouth the words, they can gain entrance to the tent and piss away, or, at least, slyly obstruct.

Case in point: Mitt Romney. Most folks remember his 2012 private fundraiser chat in Boca Raton, Florida, for his scornful remarks about the 47 percent of Americans whom he declared fail to take personal responsibility for their own lives. But during that $50,000-a-plate dinner, a donor asked Romney how he would solve the “Palestinian problem.” Romney provided a detailed reply and insisted that the Palestinians have “no interest whatsoever in establishing peace, and that the pathway to peace is almost unthinkable to accomplish.”

He noted that a Palestinian state posed “thorny questions” and became quite passionate in detailing the issues at hand:

Some might say, well, let’s let the Palestinians have the West Bank, and have security, and set up a separate nation for the Palestinians…[B]ut the border between Israel and the West Bank is obviously right there, right next to Tel Aviv, which is the financial capital, the industrial capital of Israel, the center of Israel. It’s—what the border would be? Maybe seven miles from Tel Aviv to what would be the West Bank…The other side of the West Bank, the other side of what would be this new Palestinian state would either be Syria at one point, or Jordan. [Note: the West Bank does not share a border with Syria.] And of course the Iranians would want to do through the West Bank exactly what they did through Lebanon, what they did near Gaza. Which is that the Iranians would want to bring missiles and armament into the West Bank and potentially threaten Israel. So Israel of course would have to say, “That can’t happen. We’ve got to keep the Iranians from bringing weaponry into the West Bank.” Well, that means that—who? The Israelis are going to patrol the border between Jordan, Syria, and this new Palestinian nation? Well, the Palestinians would say, “Uh, no way! We’re an independent country. You can’t, you know, guard our border with other Arab nations.” And now how about the airport? How about flying into this Palestinian nation? Are we gonna allow military aircraft to come in and weaponry to come in? And if not, who’s going to keep it from coming in? Well, the Israelis. Well, the Palestinians are gonna say, “We’re not an independent nation if Israel is able to come in and tell us what can land in our airport.” These are problems—these are very hard to solve, all right?

He went on: “I look at the Palestinians not wanting to see peace anyway, for political purposes, committed to the destruction and elimination of Israel, and these thorny issues, and I say there’s just no way.”

Romney was indicating he did not believe in the two-state solution and was opposed to a give-and-take peace process: “The idea of pushing on the Israelis to give something up to get the Palestinians to act is the worst idea in the world.”

Romney, of course, was entitled to his view. But during the 2012 campaign, he told the Israeli newspaper Haaretz that he was all for a two-state solution:

That statement, viewed against his private comments, appears in retrospect to be the sort of prevarication pro-Israel hawks resort to when they want to sound reasonable and fear that sharing their true beliefs would isolate them from the dominant diplomatic discourse. By the way, the Republican Party platform approved at Romney’s nominating convention noted unequivocal backing for the two-state solution: “We envision two democratic states—Israel with Jerusalem as its capital and Palestine—living in peace and security.”

During the 2012 campaign, Romney was never pressed to explain why he publicly supported the two-state solution but privately said he believed it couldn’t work. But given that his national security aides included prominent neocons known for their hawkish support for Israel, it’s no stretch to assume he was representing a duplicity that exists within portions of GOP foreign policy circles.

And now Netanyahu has made it undeniable that the widespread suspicions about his devotion to the two-state solution were warranted. Whether he wins or loses—and in Israel winning means not necessarily placing first but being able to pull together a parliamentary majority—Netanyahu accomplished something important: he has demonstrated that he is outside the tent and there is no need to pretend otherwise. This will further distance him from the international community and likely undercut his already limited effectiveness as a crusader against the Iranian nuclear deal under construction. Moreover, his blatant election ploy will place pressure on American GOPers. Will the Republicans, who have slavishly embraced Netanyahu, now also openly reject the two-state solution? If so, they could end up following Bibi into the wilderness.