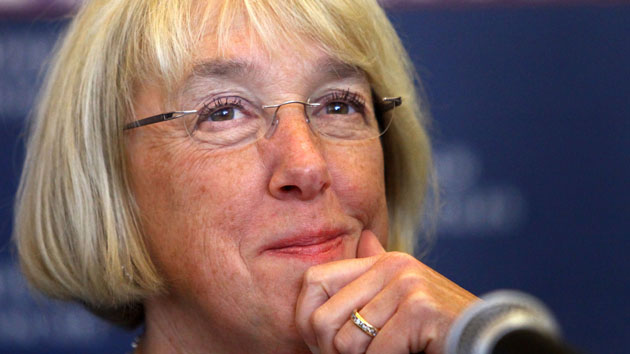 Update (3/30/15)—So much for that. On Monday, Murray endorsed Schumer, who now appears to have a clear path to Reid’s job.

In the nanoseconds after Democratic Senate leader Harry Reid announced Friday morning that he will give up his leadership post and retire in 2016, liberal groups raced to promote their go-to solution for almost any political problem: Sen. Elizabeth Warren. Much like the movement to draft Warren for president, the idea of putting her in charge of the Democratic caucus was more dream than reality. Warren’s office has already said she won’t run, and as Vox‘s Dylan Matthews explains, putting Warren in charge of the Democratic caucus would prevent her from holding her colleagues accountable when they stray too far from progressive ideals.

Instead, Reid’s likely replacement is New York Sen. Chuck Schumer, who already has endorsements from Reid and Dick Durbin, the outgoing minority leader’s No. 2. But lefties have long been wary of Schumer, who, thanks to his home base in New York City, is far more sympathetic to Wall Street than the rest of his caucus. And lost in the Warren hype is another female senator: Washington’s Patty Murray.

As caucus secretary, Murray is the fourth-ranking member of Senate Democratic leadership, behind Reid, Durbin, and Schumer. If she decides to take on Schumer for Reid’s job, Murray could be the first woman to serve as a party leader in the US Senate. Murray’s office didn’t respond to a request for comment on whether she’d run for the job and, besides a general statement praising Reid, was notably quiet on Friday.

In 2013, I cowrote a profile of Murray for The American Prospect looking at her role in leading Democrats’ negotiations with Republicans on the budget, and explained how she’s a pragmatic progressive who will push for the most liberal policies she can pass while still being willing to forge compromise with the centrists in her party:

There’s something peculiarly undefined about Murray’s ideology. She’s a liberal, a West Coast liberal to be precise: strong on social issues, the environment, workers’ rights, and the government’s role in society. She hews closely to the Democratic talking points of the day. But it’s hard to discern a coherent vision or theory behind her views. She is as far left as you can go without alienating the centrists in the party. More than anything, she’s a pragmatist. Success trumps belief in the “right” things. At the same time, Murray doesn’t venerate moderation for its own sake—she’s no Rahm Emanuel. “She’s a strong progressive,” says a former Budget Committee staff member, “but she won’t tilt at windmills, she won’t force a vote on something she knows she’s not going to win.”

Murray certainly has the résumé to compete for the job. She led the Democrats’ campaign arm in 2012, when the party picked up two Senate seats, defying pundits’ predictions. She forged a budget agreement with Rep. Paul Ryan (R-Wis.) in 2013 that averted across-the-board budget cuts. Murray is generally press-shy—she flies home across the country each weekend instead of doing the Sunday show circuit—which would leave room for other Senate stars, including Warren, to be the party’s public face while Murray controls the behind-the-scenes negotiations. But as that budget committee staffer told me in 2013, Murray isn’t known for picking fights she can’t win. If she runs against Schumer, it’ll be because she thinks she has a real shot at Reid’s post.