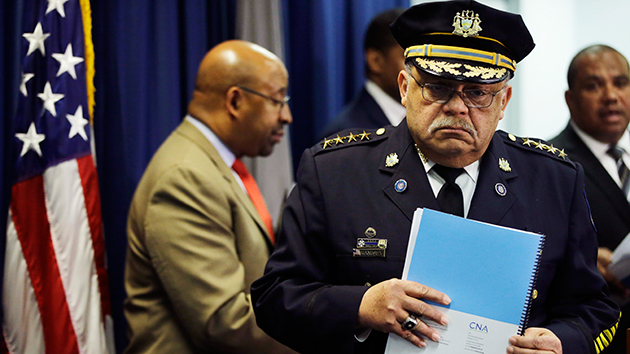 Philadelphia, a city with a vastly smaller population than that of New York City, has seen a much higher rate of police shootings in recent years. According to a new report published on Monday by the US Department of Justice, police violence disproportionately affects Philadelphia’s black community, and officers don’t receive consistent training on the department’s deadly force policy.

The 174-page report results from an investigation the DOJ launched in 2013 at the request of Philadelphia Police Commissioner Charles Ramsey, during a time when shootings by police, including fatal incidents, were on the rise, even as violent crimes and assaults against the police was on the decline. “Police carry baggage and lack legitimacy in some communities,” Ramsey, who has been appointed to chair the Presidential Task Force on 21st Century Policing, recently told the New York Times. “And for us to change the paradigm, we have to understand why we are viewed in this way.”

The DOJ’s Philadelphia investigation, which examined nearly 400 deadly force incidents between 2007 and 2013, provides a rare close-up of the patterns of police shootings. The report follows on the heels of another damning report the DOJ published on the city of Ferguson, where federal investigators found systematic racial discrimination among public officials and police.

While it’s nearly impossible to know how much the findings in Philadelphia represent police practices across the country—there is no comprehensive national data on police officers’ use of force, as we reported last year—the DOJ probe does reveal an alarming rate of shootings when compared to other large departments. Philadelphia’s police force, which is one-fifth the size of the NYPD, saw dozens more officer shootings resulting in deaths and injuries than those by the NYPD over the same period.

Here are a few key findings from Monday’s report:

In a city where blacks and whites each make up about 45 percent of the population, almost 60 percent of the officers involved in shootings between 2007 and 2013 were white, while 81 percent of suspects involved were black.

In nearly half of police shootings of an unarmed victim, the officer mistook a nonthreatening object for a gun.

Among police shootings in which the victim was black, black and Hispanic officers were more likely than their white counterparts to have shot at a suspect after mistaking a plain object for a gun.

While the overall number of police shootings declined between 2007 and 2013, the share of victims who were unarmed during those incidents more than tripled, from 6 percent in 2007 to 20 percent in 2013.

Out of 382 suspects involved in the shootings between 2007 and 2013, about 88 were killed, 180 injured, and 115 unharmed. The majority of suspects brandished a weapon but did not shoot, held a weapon other than a firearm, or were unarmed. Forty-nine suspects (13 percent) shot at the officer, injuring six and killing one.

The average time spent on investigating an officer involved shooting has declined from 417 days in 2007 to 264 days in 2013.

Out of 88 officers who were found to have violated department policy during a shooting incident, 73 percent were not suspended or terminated. Some interviewees told the Justice Department they believed that the department’s board of inquiry undermined findings from internal reviews of officer shootings, resulting in “too little discipline.”

This article has been updated to reflect changes to the Mother Jones style guide.