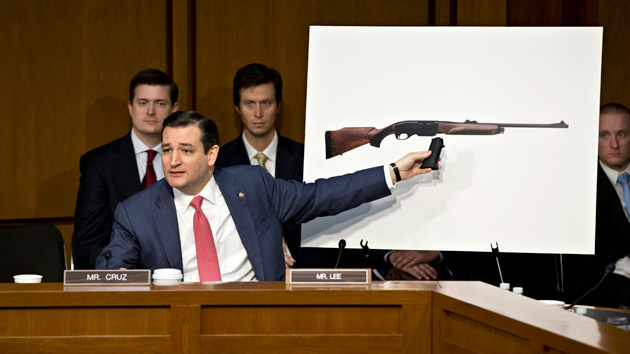 With the gaggle of GOP 2016 presidential contenders growing, the Republican wannabes have largely refrained from assailing one another and have instead focused their wrath on Democratic candidate Hillary Clinton. But now Sen. Ted Cruz (R-Texas) has launched one of the first R-on-R attacks, and he has done so regarding an issue of primal importance to the Republican voting base: guns.

A few days ago, Cruz’s presidential campaign zapped out an email hitting up conservatives for donations. The solicitation showed Cruz, the tea party favorite, wearing a bright orange hunting vest, with a shotgun on his shoulder, and its message was stark: Send me money so I can support your Second Amendment rights, which “serve as the ultimate check against government tyranny.” Cruz warned that he was “under attack from the left-wing media and even Republicans who want to label me as an extremist—all for supporting a fundamental right.” And then he took a shot at the other GOP 2016 contestants: “I’m the only candidate running for President who not only believes in the Constitutional right to keep and bear arms—but has the record of fighting for it, tooth and nail.”

The only Republican 2016er who’s a proven crusader for gun rights? That was quite the claim—and a dig at everyone else in the crowded field, particularly the other GOPers who are competing for tea party and conservative voters. After all, Sen. Rand Paul (R-Ky.) has declared himself a champion of gun rights. He has long supported the National Association for Gun Rights—a group that hypes itself as the conservative alternative to the NRA. Rand Paul often signs email solicitations for this outfit, such as one that asserted that President Barack Obama and the United Nations were plotting to “CONFISCATE and DESTROY ALL ‘unauthorized’ civilian firearms.'” (Paul was not invited to the NRA’s recent convention—because, NGAR president Dudley Brown claimed, “Paul is more pro-gun that the NRA.”) Paul has repeatedly moved to eviscerate the gun laws of Washington, DC. And prior to becoming a senator, he campaigned at a gun rights rally with armed militia members who noted that guns could be used to prevent “progressive socialists” from thwarting Second Amendment and other rights. That is, Paul has established a rather die-hard stance on guns.

Yet that did not stop Cruz from depicting himself as the only true and tested advocate for gun rights in the Republican’s 2016 gang. So what does the Paul campaign think of this Cruz attack? Paul campaign officials would not comment on the record. “We’ll pass for now,” spokesman Sergio Gor said—a suggestion that the Paul did not want to mix it up with Cruz at this point.

The same sentiment was not evident when I asked the Cruz campaign how Cruz could justify this implied assault on Rand Paul. Rick Tyler, a well-known conservative consultant working for Cruz, responded with a detailed email that essentially accused Paul and Sen. Marco Rubio (R-Fla.), another GOP 2016 candidate, of wimping out at a key moment for the gun rights crowd:

[F]rom April 11-18, 2013 in the shadow of Newtown, CT, when the Democrats were lined up to hammer Republicans, Paul and Rubio never came to the floor to stand up for the Second Amendment when the Toomey-Manchin gun bill [which would have required background checks on all commercial gun sales] was being considered. On April 17, Cruz came to the floor promoting a bill (Grassley-Cruz) he co-authored which was the conservative alternative to Toomey-Manchin [and which did not expand background checks and made it easier to purchase and transport guns against state lines]. It got 52 votes including 9 from Democrats but failed the cloture vote. During that time Cruz and Lee were very aggressive in defending the Second Amendment including gathering stories for the Congressional Record of Americans who used a firearm in self-defense.

With this note, the Cruz campaign, rather than retreat from a political fight over who’s best on gun rights, made its assault on Paul and Rubio explicit, asserting that both Paul and Rubio failed the gun rights movement in its hour of need.

And once again, Paul’s campaign did not engage, declining to answer questions about Tyler’s amplification of the original criticism. Rubio’s campaign also did not respond to a request for comment.

Paul has insisted in the past that after the Newtown gun massacre, he quickly took steps to prevent any gun safety bills from advancing in the wake of that tragedy. On April 10, 2013, he wrote on CNN’s website, “Along with Sens. Mike Lee of Utah and Ted Cruz of Texas, I circulated a letter promising to ‘oppose any legislation that would infringe on the American people’s constitutional right to bear arms, or on their ability to exercise this right without being subjected to government surveillance.'”

Following the Newtown tragedy, Paul considered Cruz an ally in the battle to beat back gun safety legislation. These days, Cruz is not returning the favor and looking to turn Paul and Rubio into targets in order to best them among a critical GOP constituency. The question is, how long will this remain a one-way fight?