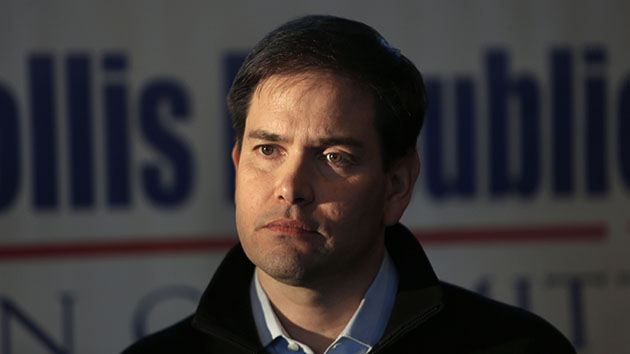 Republican Party pooh-bahs have long argued that Sen. Marco Rubio’s appealing personal story—he’s the Spanish-speaking son of Cuban immigrants—would be a key asset should he run for president in 2016. Republican pollster and Rubio adviser Whit Ayres recently hyped his boss as the candidate who can expand the GOP’s appeal beyond its largely white base—meaning he can connect with Latinos, the fastest-growing group of voters. And Rubio’s upcoming speech in Miami on Monday, when he is expected to say whether he will seek the White House, will highlight his background: The Florida Republican is scheduled to make this announcement at Freedom Tower, the the “Ellis Island of the South,” where government officials welcomed Cuban refugees from 1962 until the federal assistance program ended in 1974.

But a Rubio presidential campaign would pose an interesting poli-sci experiment, for Rubio has squandered one of his natural advantages by running away from an issue that is of primary importance to the very constituency with whom he presumably would have a special bond.

Latino voters largely support creating a pathway to citizenship for the 12 million undocumented residents in the United States, yet conservative GOP voters hate the idea. And Rubio has been caught between these two voting blocs. In the past two years, he first supported the comprehensive reform approach favored by Latinos that was embodied in a bipartisan bill approved by the US Senate, but then he distanced himself from the legislation and became a cheerleader for a secure-the-border-first strategy that appeals to the GOP base.

“In a general election, the fact that he was for comprehensive immigration reform before he was against it in order to be viable in the primary is something he’s going to be hit hard with,” says Frank Sharry, executive director of America’s Voice, a pro-immigration-reform advocacy group. He predicts that Rubio’s shifting position will be hard to justify to Latino voters. “It becomes an issue of character. Why did he backtrack?”

There’s already polling on Rubio’s immigration evolution, and it’s not good for the candidate-in-waiting. In October, the polling firm Latino Decisions asked Latino voters about their support for a Rubio presidential bid after noting his initial support for the Senate bill and then his switch to a border-first stance. The respondents said they were unlikely to consider voting for Rubio, 59 percent to 35 percent.

The story of Rubio’s flip-flop begins after President Barack Obama won the presidential election in 2012 with overwhelming support from Latino voters. Mitt Romney won just 27 percent of the Latino vote to Obama’s 71 percent, prompting the Republican National Committee to call for the GOP to embrace comprehensive immigration reform. Rubio became one of four Republicans in the Senate “Gang of Eight” crafting a bipartisan comprehensive reform bill. In June 2013, the measure passed the upper body. But this didn’t help Rubio within the GOP world. He immediately found himself defending the bill to the skeptical conservative media. His vote for the legislation set him apart from Sens. Rand Paul and Ted Cruz, two other tea party darlings who, like Rubio, were pondering 2016 presidential bids but who voted against the measure.

As the bill languished in the House—Speaker John Boehner refused to bring it up for a vote—and the GOP’s conservative base soured on Rubio, he shied away from the bill. In October 2013, Rubio essentially abandoned the legislation he had helped to write and noted he now favored a piecemeal approach. In the book Rubio released in January, American Dreams: Restoring Economic Opportunity for Everyone, he advocates allowing the undocumented to stay in the United States but does not mention a pathway to citizenship, which was a core component of his Senate bill. At the Conservative Political Action Conference in February, Rubio renounced his previous support for a comprehensive approach in his Senate bill and said the border must be secured before figuring out what to about the 12 million undocumented immigrants living in the shadows. He had completed a full reversal.

These days, Rubio’s Senate website does not even list immigration as one of his top priorities. But the website does have a page dedicated to defending the 2013 bill that calls the legislation a “starting point” containing “the toughest border immigration enforcement measures in U.S. history.”

Recently, Rubio joined his fellow Republicans in denouncing Obama’s executive actions on immigration, which will allow millions of undocumented immigrants to stay in the United States without fear of deportation. He also called for ending the 2012 program that allowed the so-called Dreamers—young undocumented immigrants who were brought here as children—to remain in the country and work or go to school. That’s a tough position to sell to Latino voters, who overwhelmingly support the president’s executive actions. A Latino Decisions poll shows 89 percent of registered Latino voters support Obama’s executive action.

Certainly, Latino voters also care about other matters, but immigration reform that addresses the status of undocumented residents is a fundamental concern for this voting bloc. Just ask the Republican National Committee. “It doesn’t matter what we say about education, jobs or the economy; if Hispanics think that we do not want them here, they will close their ears to our policies,” the RNC’s autopsy report on the 2012 election noted. “In essence, Hispanic voters tell us our Party’s position on immigration has become a litmus test, measuring whether we are meeting them with a welcome mat or a closed door.” Clearly, the RNC was referring to general-election voters, and Rubio seems to be more worried about GOP primary voters. His awkward journey from reform champion to border-first advocate may help him if he tries to secure the Republican presidential nomination, but it will likely hurt his overall shot of becoming the first Latino president.