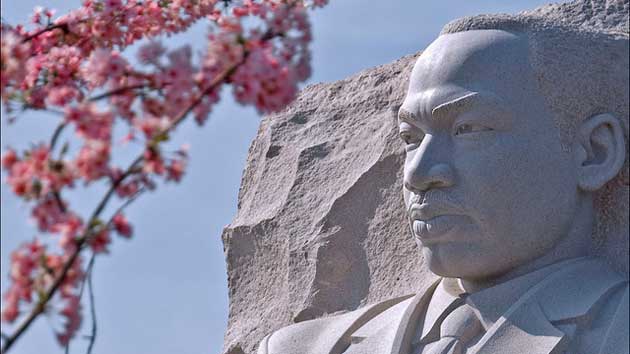 Since the death of Freddie Gray at the hands of Baltimore police, many commentators have stressed the need for peaceful protests, while others have expressed empathy for the violent unrest that soon followed. It wasn’t long before some in the former camp invoked the ideas of an iconic civil rights leader: “I just want to hear you say there should be peaceful protests, not violent protests, in the tradition of Martin Luther King,” Wolf Blitzer told DeRay McKesson, an activist and community organizer he interviewed on CNN on Tuesday.

But what did MLK really think about urban riots? “They may be deplored, but they are there and should be understood,” King said in a speech at the American Psychology Associations’ annual convention in Washington, DC, in September 1967. Here’s what else he had to say:

Urban riots must now be recognized as durable social phenomena. They may be deplored, but they are there and should be understood. Urban riots are a special form of violence. They are not insurrections. The rioters are not seeking to seize territory or to attain control of institutions. They are mainly intended to shock the white community. They are a distorted form of social protest. The looting which is their principal feature serves many functions. It enables the most enraged and deprived Negro to take hold of consumer goods with the ease the white man does by using his purse. Often the Negro does not even want what he takes; he wants the experience of taking. But most of all, alienated from society and knowing that this society cherishes property above people, he is shocking it by abusing property rights. There are thus elements of emotional catharsis in the violent act. This may explain why most cities in which riots have occurred have not had a repetition, even though the causative conditions remain. It is also noteworthy that the amount of physical harm done to white people other than police is infinitesimal and in Detroit whites and Negroes looted in unity.

A profound judgment of today’s riots was expressed by Victor Hugo a century ago. He said, ‘If a soul is left in the darkness, sins will be committed. The guilty one is not he who commits the sin, but he who causes the darkness.’

The policymakers of the white society have caused the darkness; they create discrimination; they structured slums; and they perpetuate unemployment, ignorance and poverty. It is incontestable and deplorable that Negroes have committed crimes; but they are derivative crimes. They are born of the greater crimes of the white society. When we ask Negroes to abide by the law, let us also demand that the white man abide by law in the ghettos. Day-in and day-out he violates welfare laws to deprive the poor of their meager allotments; he flagrantly violates building codes and regulations; his police make a mockery of law; and he violates laws on equal employment and education and the provisions for civic services. The slums are the handiwork of a vicious system of the white society; Negroes live in them but do not make them any more than a prisoner makes a prison. Let us say boldly that if the violations of law by the white man in the slums over the years were calculated and compared with the law-breaking of a few days of riots, the hardened criminal would be the white man. These are often difficult things to say but I have come to see more and more that it is necessary to utter the truth in order to deal with the great problems that we face in our society.