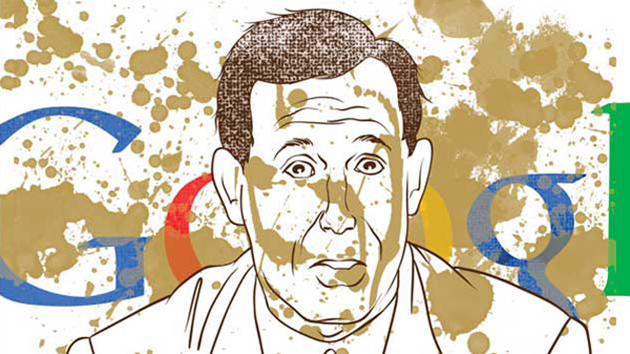 Poor Rick Santorum. The former Republican senator from Pennsylvania is announcing his second presidential run today at a manufacturing company in Butler County, Pennsylvania. But he will be doing it without much help from those who bolstered his campaign in 2012. The Duggars have ditched him for former Arkansas Gov. Mike Huckabee (though they might not be much help to Huckabee these days). And Chuck Laudner, the influential Iowa conservative operative who drove the candidate around the state in 2012 in the “Chuck Truck,” has thrown his lot in with Donald Trump.

It seems Santorum, who won Iowa’s GOP caucuses in 2012, has been forgotten. But not by Dan Savage.

Savage, the syndicated sex columnist, has been Santorum’s No. 1 nemesis for 12 years, ever since Savage launched the world’s most famous Google bomb against the former senator and turned his name into a sexual neologism.

Santorum’s Google problem began in 2003, when he compared homosexuality to bestiality and pedophilia, saying the “definition of marriage” has never included “man on child, man on dog, or whatever the case may be.” The ensuing controversy prompted Savage, who’s gay, to start a contest, asking readers to propose slang terms to “memorialize the scandal.”

The winner suggested giving Santorum’s name to describe “the frothy mixture of lube and fecal matter that is sometimes the byproduct of anal sex.” Savage launched a website, www.spreadingsantorum.com, and a meme was born. Though mainstream news outlets would never link to it, Savage’s site rose in the Google rankings, thanks in part to bloggers who posted Santorum-related news on the site or linked to it from their blogs. Eventually Savage’s site eclipsed Santorum’s own campaign site in search results. This meant that when folks searching for information on Santorum Googled that name, they turned up Savage’s site, not Santorum’s. Some observers suggested Savage’s stunt may have contributed to Santorum’s crushing 18-point defeat in his 2006 campaign against Bob Casey.

Santorum’s efforts to get Google to take the site down or at least to bury it in the rankings not only failed, but generated more ridicule (not to mention more links, which then kept the site high in the Google rankings). The website continued to plague Santorum during his 2012 presidential campaign. It was occasionally suggested that he was running solely to fix his Google problem. Savage hasn’t updated his Spreading Santorum site since 2012, but today it still pops up on the first or second pages of search results for Santorum’s name.

Santorum’s announcement that he’s running in 2016 may drive Savage to update his site and gin up traffic. But he hasn’t decided yet. “Maybe we’ll crank up the Wurlitzer one more time,” he says. “But maybe not. The rest of the Republican Party and the rest of the world has moved on.”

Whether he juices up the machine again really doesn’t matter, though. The neologism is so entrenched in popular culture at this point that the website, says Savage, is “just on autopilot.” Political reporters keep the links coming in, and Santorum’s entry into the presidential race only guarantees that the site will get more exposure, says Savage.

Previously, Savage had jokingly offered Santorum an out: If Santorum would donate $5 million to the same-sex-marriage advocacy group Freedom to Marry, then Savage would shut down the site. Naturally, Santorum did not accept the offer. He has claimed to wear Savage’s attacks as a badge of honor, and he has continued to oppose same-sex marriage. (Recently, Santorum said he wouldn’t attend the marriage of a gay loved one because of his Catholic faith.)

Santorum’s window of opportunity for buying his way out of his Google problem, though, is quickly coming to a close. The founder of Freedom to Marry, Evan Wolfson, has said if the US Supreme Court rules in favor of legalizing same-sex marriage next month, as seems probably, he will close up shop. Mission accomplished.

Savage, too, has declared victory over Santorum. “We win. We got marriage, and he is a joke,” he says.

The end of the war over same-sex marriage may leave Santorum without a key issue. But he still has aggressive Islamophobia. He recently called for bombing “ISIS back to the seventh century.”

Savage says that it would be virtually impossible for Santorum to somehow reinvent himself. Rather than running for president, Savage suggests that Santorum stick to making his “alternate reality movies for people like him.” (In 2013, Santorum became the CEO of a Christian film company.) “Rick Santorum profited politically and you could say financially by attacking queer people,” Savage says. “He’s defined by his anti-gay animus, his homophobia. What else has he got?”