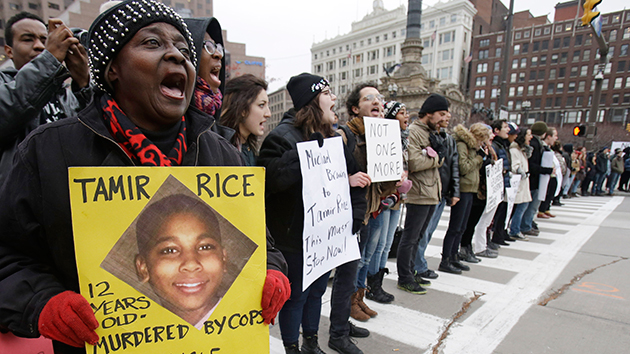 Protesters in Cleveland on Nov. 25, 2014, following the police shooting of Tamir Rice.Tony Dejak/AP

Nearly six months after 12-year-old Tamir Rice was shot to death by Cleveland police, the Cuyahoga County Sheriff’s Department gave its first press conference on Tuesday about its ongoing criminal investigation. In a brief statement, Cuyahoga County Sheriff Clifford Pinkney told reporters that his team had “poured over thousands of pages of documents, and conducted numerous search warrants and interviews with witnesses.” Investigators have also taken 3D scans from the Cuddell Recreation Center grounds, where Rice died, and reviewed all surveillance footage from the surrounding area, Pinkney said. He also said that “a few more witnesses need to be interviewed and more forensic evidence needs to be collected,” and that “a majority of our work is complete.” Pinkney declined to take any questions and said he would provide no deadline for when the investigation would end.

Following Pinkey’s statement, reporters huddled around a woman named Latonya Goldsby, who said she was a cousin of Rice. Goldsby wept as she told reporters that Rice’s family had no idea that the sheriff would be delivering the statement—the agency’s first since taking over the investigation in January—until seeing it described on the news Monday night. She said that she rushed to the press conference expecting the sheriff to announce plans to charge the officers involved in Rice’s death. “My family is very disappointed with how this investigation has transpired,” she said. “There is no transparency in Cleveland.” She added: “I feel so disgusted with the city of Cleveland for not showing some type of compassion to my family. We had to bury a 12-year-old kid.” [Updated May 12, 12:55 p.m. ET; original story starts below.]

On Tuesday, nearly half a year since 12-year-old Tamir Rice was shot and killed at a community center park by a Cleveland police officer, the Cuyahoga County Sheriff’s Department will make its first public statement about the progress of its criminal investigation. Sheriff Clifford Pinkney will review the timeline of the investigation from the day Rice was shot until present, and what remains to be done, according to a county official familiar with the case. Citing the ongoing investigation, Pinkney’s office says he plans to take no questions from the media following the statement.

The sheriff’s department has remained quiet about the investigation ever since taking it over from the Cleveland Police Department in January, despite mounting questions about how long the process has taken in light of explicit video footage of the killing and the troubling police record of Timothy Loehmann, the officer who fired the fatal shots. The few details about the investigation that have come to light so far have been via court filings issued as part of the Rice family’s wrongful death suit against the city of Cleveland. Last week, Loehmann and fellow officer Frank Garmback filed a motion in that case seeking to invoke their Fifth Amendment rights against self-incrimination.

The Cuyahoga County Sheriff’s Department declined to comment on the record about the two officers’ role in the ongoing criminal investigation.

Political infighting may have been a factor in the prolonged process: After Cleveland Mayor Frank Jackson asked the county to take over the investigation in early January, the sheriff’s department requested help from Ohio Attorney General Mike DeWine, against Jackson’s wishes. DeWine had previously said that a 2012 police shooting involving another officer, Michael Brelo, revealed a “systemic failure” at the Cleveland PD. Brelo currently faces voluntary manslaughter charges for shooting and killing two unarmed black suspects during a car chase, and a verdict is expected this month. (Thirteen officers were involved that case, but Brelo was the only one charged.) The handover of the Rice case also coincided with the start of a new Cuyahoga County executive’s term.

Still, particularly against the backdrop of ongoing national news about officer-involved killings, the pace of the Rice investigation has been troubling, says Ayesha Bell Hardaway, a law professor at Case Western Reserve University and a former Cuyahoga County assistant prosecutor. “The lapse of time from Tamir’s death until now has been too great,” she says, adding that “the public’s confidence in the police department and the city of Cleveland is hanging in the balance.”