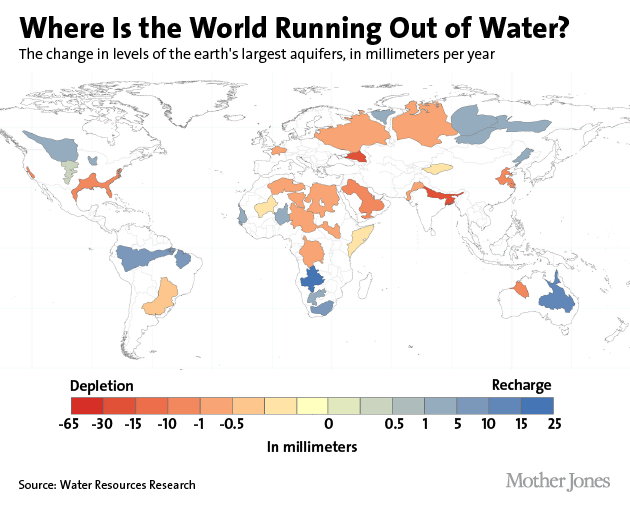 Groundwater loss isn’t just a California problem: According to a recent study by researchers at NASA and the University of California-Irvine, humans are depleting more than half of the world’s 37 largest aquifers at unsustainable rates, and there is virtually no accurate data showing how much water is left.

The study, published this week in the journal Water Resources Research, used 11 years of satellite data to measure water depletion. Eight aquifers, primarily in Asia and Africa, were qualified as “overstressed,” meaning they had nearly no natural replenishment. The most stressed basin was the Arabian Aquifer System, beneath Saudi Arabia and Yemen. Other quickly disappearing aquifers were the Indus Basin aquifer, between India and Pakistan, and the Murzuk-Djado Basin, in northern Africa.

Five other aquifers, including California’s Central Valley Aquifer, were “extremely” or “highly” stressed, with some natural replenishment but not enough to make up for growing demand.

The growing demand on water, exacerbated by overpopulation and climate change, has led to a situation that is “quite critical,” says Jay Famiglietti, a senior water scientist at NASA.

Aquifers house groundwater, which serves as a savings account of sorts: It’s good to rely on in droughts but takes decades or centuries to replenish. Groundwater usually makes up about 40 percent of the California’s freshwater supply, but now, as California endures its fourth year of drought and as farmers have resorted to drilling for water, that number has leapt to more than 60 percent. The state recently implemented regulations to measure groundwater supply that will gradually be implemented over several years. 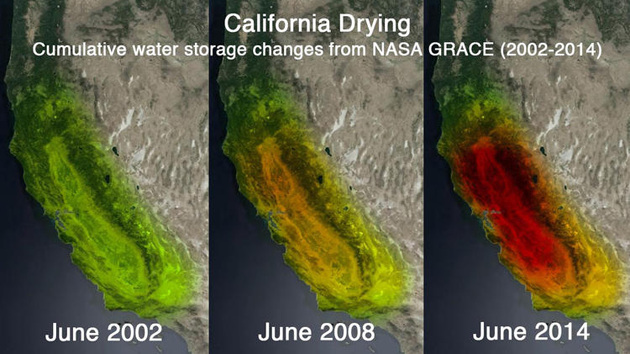 Measuring exactly how much groundwater remains around the world is both difficult and expensive, as it involves drilling, sometimes thousands of feet, into thick layers of bedrock. As a result, estimates of how much longer the existing groundwater will last often vary by orders of magnitude—from decades to millennia.

The researchers got around that problem by using data that shows subtle changes in the Earth’s gravity, which is affected by the weight of the aquifers. They acknowledge that this is just a start, and call for more local, detailed data.

“We know we’re taking more than we’re putting back in—how much do we have before we can’t do that anymore?” said lead author Alexandra Richey to the Los Angeles Times. “We don’t know, but we keep pumping. Which to me is terrifying.”