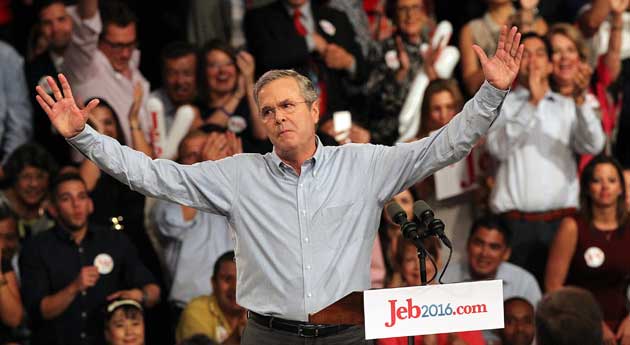 There were many absurd moments during Jeb Bush’s official I’m-running-for-president announcement on Monday. But the most Bizarro World instance might have come when Bush, the brother of the president who committed one of the greatest strategic blunders in US history, and the candidate who has enlisted the architects of George W. Bush’s invasion of Iraq as his own foreign policy advisers, embraced the right’s Obama-is-feckless meme. Bush slammed President Barack Obama and his foreign policy team for failing “to be the peacemakers.” He added, “With their phone-it-in foreign policy, the Obama-Clinton-Kerry team is leaving a legacy of crises uncontained, violence unopposed.”

This has become a conservative mantra: Obama has done nothing to counter the foes of the United States. Forgotten are the raid that nabbed Osama bin Laden, the drone strikes that have decimated Al Qaeda, the special forces assaults on the Taliban, and the bombing raids mounted against the Islamic State in Iraq and Syria. Obama’s moves in the fight against these extremists are certainly open to debate. But his conservative critics keep insisting the guy essentially does nothing. Note Bush’s brazen accusation that Obama refuses to oppose violence.

The day after Bush issued this indictment, a US drone strike in Yemen killed Nasir al-Wuhayshi, Al Qaeda’s No. 2. He was the leader of Al Qaeda in the Arabian Peninsula (AQAP), one of the most active units in the extremist network. His death is “the biggest blow against Al Qaeda since the death of bin Laden,” CNN terrorism analyst Paul Cruickshank declared.

After news of the strike emerged, the American Enterprise Institute, a neocon central command, rushed out a statement:

The death of Nasser al Wahayshi is another blow to AQAP, but more importantly, to Al Qaeda global. Wahayshi’s named successor in Yemen, Qasim al Raymi, will take up the reins and the impact locally will be minimal, even after the recent loss of two other senior AQAP leaders. But Al Qaeda is now without a general manager—someone to run its global operations—and the loss will be felt.

So how does Jeb Bush and the other GOPers who claim Obama is a weak, do-nothing commander in chief (Marco Rubio, this means you), reconcile their attacks with reality? Well, they don’t—and they don’t have to. They are competing for GOP primary voters who reside within an ideological world in which Obama is a foreign-born secret Muslim socialist who is trying to purposefully weaken the United States. So they will continue to depict Obama as more of a threat to his own country than to its enemies. Al Qaeda might see it differently.