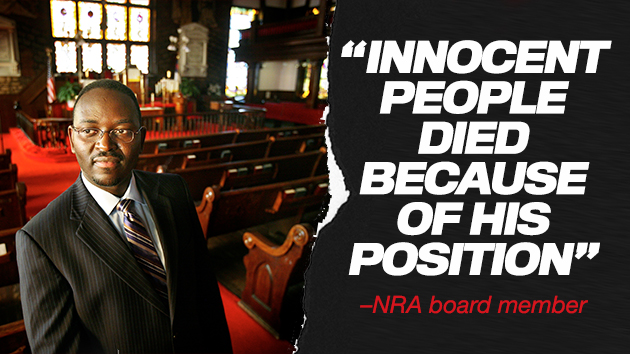 Gun rights activists have been out in force since the massacre at Emanuel AME Church in Charleston, South Carolina, once again blaming the slaughter on so-called gun-free zones, and claiming that an armed citizen could have otherwise stopped the attack. It’s an argument that the gun lobby has used for many years, but on Thursday afternoon it was marked by a brazen new low with comments from Charles Cotton, a longtime board member of the National Rifle Association. Cotton wrote on a Texas gun-rights forum that slain pastor and South Carolina state Sen. Clementa Pinckney was responsible for the murders of his congregants because of his opposition to looser concealed-carry laws.

“Eight of his church members, who might be alive if he had expressly allowed members to carry handguns in church, are dead,” Cotton said. “Innocent people died because of his political position on the issue.”

It’s unsurprising that debate over gun laws flared up in the aftermath of Charleston, on both sides of the issue. Speaking from the White House on Thursday, President Obama said, “At some point, we as a country will have to reckon with the fact that this type of mass violence does not happen in other advanced countries…with this kind of frequency. And it is in our power to do something about it.”

Yet, Obama also spoke of the “dark part of our history” evoked by an attack on a historic black church in the South. No one who has watched the horror unfold in Charleston doubts that the killer’s motivation was infused with racial hatred. And to suggest that gun restrictions were the root cause of the bloodbath isn’t just callous—it’s also plain wrong.

As Mother Jones has previously reported, there has never been any evidence that mass shooters picked their targets based on gun regulations; to the contrary, data from scores of cases shows perpetrators had other specific motivations for where they attacked, including racial hatred. The idea that armed citizens stop crimes in the United States has also been wildly exaggerated by the gun lobby, as a new study based on federal data reaffirms.

Cotton has long led pro-gun lobbying efforts in Texas: He was at Gov. Greg Abbott’s side last weekend when Abbott signed a new open-carry bill at a Texas gun range.

Cotton’s comments have since been deleted from TexasCHLforum.com, where he is listed as a site administrator. He did not reply to a request for further comment. In a statement on Friday to Politico, the NRA distanced itself from Cotton’s rhetoric, saying individual board members “do not have the authority to speak for the NRA.”