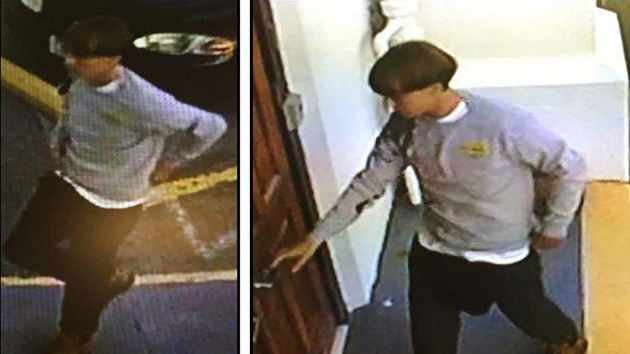 The US law enforcement community regards homegrown violent extremists, not radicalized Islamists, as the most severe threat from political violence in the country, according to a new study from the Triangle Center on Terrorism and Homeland Security. Released late last week, the report comes amid renewed focus on the problem ever since a 21-year-old avowed white supremacist carried out a mass shooting at a historic black church in Charleston, South Carolina. There is a growing body of research highlighting the threat from right-wing extremists, but who or what exactly does that term encompass, and how big really is the problem? Mother Jones examined various reports and contacted experts to find out more.

What are “far-right” or “right-wing” extremists?
While there is no uniform definition, these terms loosely encompass individuals or groups associated with white supremacist, anti-government, sovereign citizen, patriot, militia, or other ideologies that target specific religious, ethnic, or other minority groups. (Meanwhile, how to determine which violent attacks constitute an act of terrorism has been a subject of renewed debate.)

Registered users on one white supremacist website tripled to 300,000 after Barack Obama was elected president.

The available data on violent attacks perpetrated by right-wing extremists ranges widely, explains Michael German, a former FBI agent who is now a national security expert at the Brennan Center for Justice. Researchers at the US Department of Homeland Security, the New America Foundation, the Southern Poverty Law Center, the University of Maryland, and the Combating Terrorism Center at West Point have all compiled data on right-wing extremist violence using varying criteria over different periods of time, most of them going back to the mid 1990s, when the Oklahoma City bombing riveted attention on the problem. (The exception is the University of Maryland’s data, which dates to 1970, during a surge in violent far-left extremism.)

The various studies have all led to the same general conclusion: The threat from homegrown right-wing extremists has grown in recent years. “Since 2007, there has been a dramatic rise in the number of attacks and violent plots originating in the far-right of American politics,” Arie Perliger, the director of terrorism studies at the Combating Terrorism Center, wrote in a 2012 report. 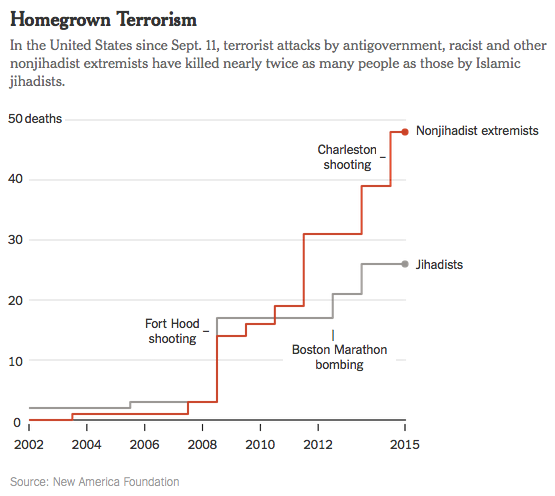 Courtesy of the New York Times

The Combating Terrorism Center at West Point, which compiles data on “all violent attacks that were perpetrated by groups or individuals affiliated with far-right associations,” counted an average of 337 annual attacks by right-wing extremists in the decade after 9/11, including a total of 254 fatalities, or an annual average of about 18 deaths. 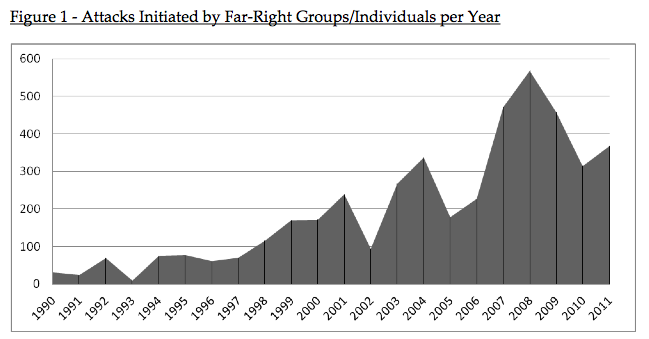 Daryl Johnson, a former domestic terrorism intelligence analyst at the Department of Homeland Security who now heads the consulting firm DT Analytics, says attacks from far-right extremists “increased dramatically” after 2008. Johnson, who began tracking domestic terrorism while at DHS, estimates there is currently an average of one plot or attack every 40 to 45 days. “We are in a heightened period right now,” he says.

Johnson’s view is supported by a 2012 report from Perliger at the Combating Terrorism Center: “Since 2007, there has been a dramatic rise in the number of attacks and violent plots originating in the far-right of American politics,” it notes.

How organized are these extremists?
As former Mother Jones staffer Adam Serwer reported in August 2012 when a neo-Nazi carried out a massacre at a Sikh temple in Wisconsin, the number of American extremist groups has also risen overall in recent years: 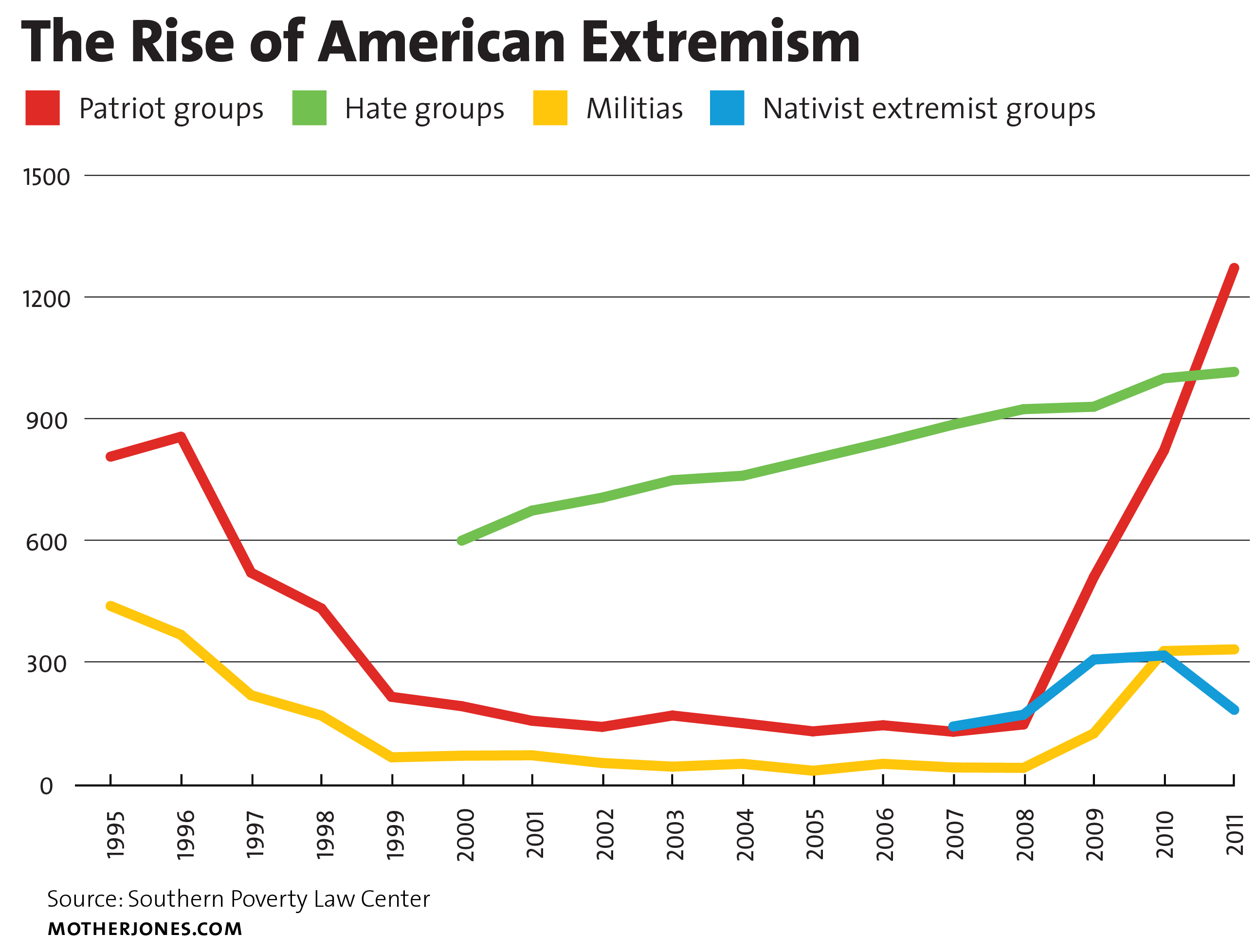 How is law enforcement responding?
About three quarters of the 382 state and local law enforcement agencies surveyed by the Triangle Center listed anti-government extremism as a top threat in their jurisdiction, compared with 39 percent that listed violence connected with Al Qaeda or related groups.

In 2014, the Anti-Defamation League documented an upswing in far-right attacks against law enforcement: 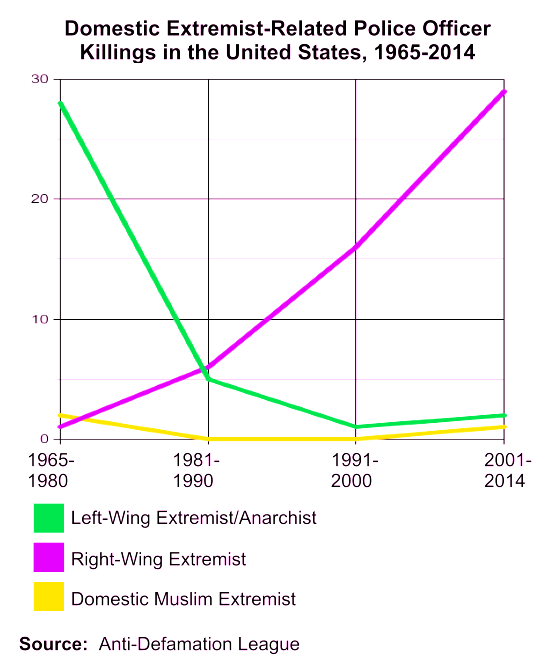 But those numbers should be put into perspective, the report’s authors Charles Kurzman and David Schanzer note, since terrorism of all kinds represents a small fraction of total violent crime in the United States. The number of homicides in the United States since 9/11 totaled more than 215,000.

And because the data on right-wing violence varies so much, “it’s hard to get a true understanding of the threat,” German says, adding that the FBI—whose No. 1 priority is to protect the United States from a terrorist attack—does not publish data on domestic terrorism. “Instead, we rely on these private groups that are doing a public service by compiling and publishing information,” he says. The FBI does collect and publish limited data on hate crimes, which it defines as criminal offenses “against a person or property motivated in whole or in part by an offender’s bias against a race, religion, disability, ethnic origin or sexual orientation.” But German as well as researchers at the Southern Poverty Law Center point out that data relies on voluntary reporting and thus undercounts those numbers.

So what is the government doing about it?
The federal and local governments ramped up efforts to combat domestic terrorism of all kinds in the wake of the 1995 Oklahoma City bombing that killed 168 people. A few months following the 9/11 attacks, FBI official Dale Watson testified before the Senate Intelligence Committee that “right-wing groups continue to represent a serious terrorist threat.” But Johnson, German, and others assert that federal counterterrorism programs since 9/11 have focused overwhelmingly on the perceived threat from Islamic extremism. That includes the Obama administration’s “countering violent extremism” strategy, which “revolves around impeding the radicalization of violent jihadists,” according to a 2014 Congressional Research Service report.

The attack in Charleston underscored “the failure of the federal government to keep closer tabs” on right-wing extremists, argues Gerald Horne, a historian and civil rights activist at the University of Houston.

But the focus may soon increase. In February, CNN reported that DHS circulated an intelligence assessment that focused on the domestic terror threat posed by right-wing extremists. Kurzman and Schanzer also point to a handout from a training program sponsored by the Department of Justice, cautioning that the threat from antigovernment extremism “is real.”

Perliger also notes that attacks have moved beyond states in the South—the birthplace of groups such as the KKK and the site of major attacks during the 1960s—to places including California, New York, Illinois, and Pennsylvania. “The existence of significant minority groups in the different states appears linked with the level of far-right violence they experience,” Perliger says. In a recent editorial, the Southern Poverty Law Center’s Morris Dees and J. Richard Cohen argued that far-right extremism is gaining ground beyond state boundaries: “Unlike those of the civil rights era, whose main goal was to maintain Jim Crow in the American South, today’s white supremacists don’t see borders; they see a white tribe under attack by people of color across the globe.…The days of thinking of domestic terrorism as the work of a few Klansmen or belligerent skinheads are over.”

What factors might explain the latest rise in this kind of extremism?
Experts suggest several factors may have played into it. Researchers commonly attribute the spike in right-wing attacks, around 2008, to the election of an African American president. Around the time of Obama’s election, Johnson notes how the white supremacist web forum Stormfront had less than 100,000 registered users. “Today, it is over 300,000,” he says. Scholars have also debated the role the 2008 financial crisis, a heightening debate over immigration, and other socioeconomic changes may have had. The Combating Terrorism Center’s Perliger points out that past spikes in far-right attacks also corresponded with the passing of landmark legislation such as the Civil Rights Act in 1964 and firearm restrictions during the 1990s.

Was the Charleston shooting a hate crime or an act of terrorism?
It had the marks of both, according to Horne, German, and others. FBI Director James Comey came under fire for saying the Charleston shooting did not appear to be an act of terrorism based on the available evidence. German adds that Roof’s racist comments about black people, his photos with flags invoking racist ideologies, and the fact that he killed a state senator, make clear that his attack on the church was both targeted and political.

Could the Charleston shooting have been prevented?
Violent attacks by extremists are difficult to predict, but both the government and researchers could be doing a better job of working to understand them, German says. “You have to understand both how the movement works and what parts are dangerous and what parts aren’t, as well as understanding how the particular terrorist activity starts,” he explains, adding that most research on terrorist attacks has fixated on their ideological roots, rather than their methodologies. “That’s where you’ll see terrorism studies completely lacking, despite the hundreds of millions of dollars that have been thrown into terrorism research. They’re not studying the right things.”