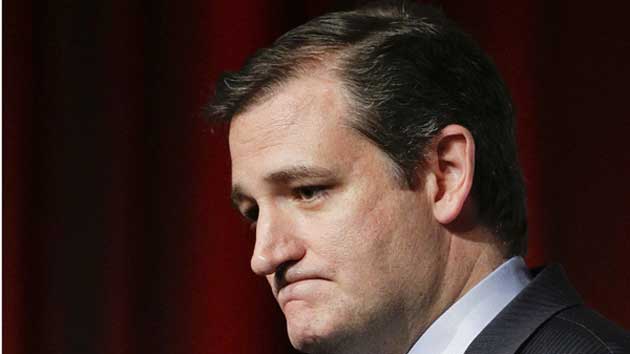 Running for president is tough. Candidates must spend long stretches on the road, devote many hours to sucking up to rich people to raise a boatload of money, and eat tons of bad food. Yet those who take the leap usually don’t whine about all this. But not Ted Cruz. In one of the more unusual fundraising emails of this campaign season, Cruz, a tea party GOP senator from Texas, bitches about the hardships he is forced to endure as an official presidential wannabe.

In the note, Cruz moans that he’s “sacrificing a great deal” to seek the White House. He has less time with his family. He and his wife Heidi, who until recently was a Goldman Sachs executive, are taking a financial hit because of the campaign. His personal time is encroached upon by campaign obligations. (“My days are no longer my own,” he grouses. “Days start before dawn and many times don’t end until early the next morning.”) And, perhaps worst of all, the food is lousy, and—OMG!—campaigning interferes with his sleep needs: “My runoff campaign for the Senate in 2012 took a toll, but now I’m sacrificing even more sleep with long nights and constant travel.”

The only thing that seems to be missing from the solicitation is this: Bwaaaaaaaaa!

But here’s his pitch: if Cruz can suffer through all these awful sacrifices, other “courageous conservatives” can “make an instant and secure sacrificial gift” to his campaign. From $35 to $1000.

In other words, while Cruz is putting up with a “pizza diet” to advance the conservative cause, right-wingers ought to at least kick in the money for his junk food and hotel rooms.

If Cruz is now griping about the lack of sleep, imagine how much he’ll complain if he does become president.

I’m about to ask you to make a sacrifice in the next 48 hours. But before I do, I want you to know: I wouldn’t ask you if I hadn’t already done it myself.

You see, running for President of the United States is a significant sacrifice. Only through prayer and many late night discussions with my wife, family, and closest friends did I make THE decision.
And I must share with you — I’ve committed to sacrificing a great deal for our campaign:

——, I’ve chosen to sacrifice part of mine and my families lives to run for President — but I think you will agree with me that the sacrifice is well worth it.

Unless courageous conservatives are willing to make tough sacrifices to stand up and fight, we will not be able to restore America.

Today, I’m asking you to make a sacrifice —–. Will you join me by making a special, one-time gift to my campaign?
I’ve asked my staff to put together these secure links below so you can make an instant and secure sacrificial gift — it can be done in just 5 minutes.

I can sacrifice $35 to restore America >>

Will you be a courageous conservative and make a special gift today to help restore America? I can only reach this goal with your help.
I wouldn’t ask you if 1) I wasn’t willing to make the same sacrifice myself; and 2) the stakes weren’t so high.
——, time is critical, and if you will, please make this special gift in the next 48 hours — I would be so grateful.

P.S. ——-, I’ve chosen to make some steep, necessary sacrifices in our fight to restore America. Will you join me with your gift of $250 or $100? OR if $35 or $10 is a stretch gift for you, I will be grateful for every dollar you can sacrifice and will ensure it is faithfully used.