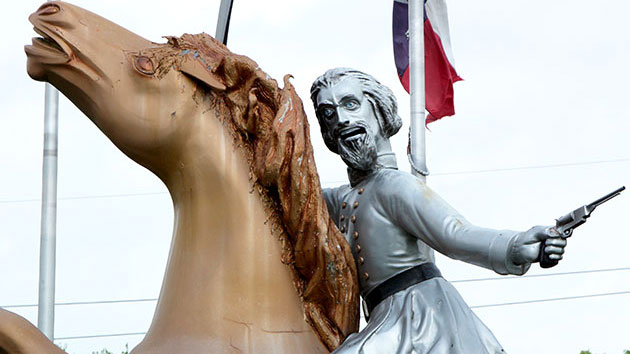 Nathan Bedford Forrest is still all over the place in Tennessee. A state park is named for him, a bronze bust of his image watches over the state Capitol, and a grandiose monument of him resides at his grave in Memphis. But his most gripping presence may be along Interstate 65, running through Nashville, where there’s a can’t-miss-it statue of Forrest—he’s atop a horse, with a sword in his right hand, a pistol in his left, surrounded by Confederate flags. His mouth is stretched in a battle cry as his horse rears up with ears laid flat against its skull. Forrest was a Tennessee-born lieutenant general in the Confederate Army; after the Civil War ended, he focused his energy on the Ku Klux Klan, which anointed him its first grand wizard.

This so-called piece of art may sound extreme in more ways than one. And indeed, the statue is now a subject of debate among local leaders, as a backlash against symbols of the Confederacy sweeps the South in the wake of the racially motivated church massacre in Charleston, South Carolina.

Megan Barry, a candidate in Nashville’s upcoming mayoral race, is now proposing that trees and shrubbery be planted along I-65 to hide the eyesore and object of (renewed) contention. “Symbols matter, and we have definitely seen that symbols can awaken in people all kinds of racism,” Barry told Mother Jones. “Things like the Confederate flag and Nathan Bedford Forrest, they have their places in museums, but they don’t have their place as a celebration of heritage in the public space.”

Her proposed solution would have a certain echo to it: When the statue was first unveiled in 1998, former state Sen. Douglas Henry (who later gained notice for some controversial comments regarding rape and abortion) had trees cleared out that were blocking the view of it from the interstate.

The statue stands on a small plot of land owned by 79-year-old local businessman, Bill Dorris, who insists that taking the statue down would be unfair to the Civil War tourists who come to Tennessee each year. The 25-foot fiberglass statue was created by lawyer and sculptor Jack Kershaw, who is best known for being among the string of lawyers hired to defend James Earl Ray, the convicted assassin of Martin Luther King Jr. In his 2010 obituary in the New York Times, Kerhsaw is also identified as a founder of the League of the South, a group known for its secessionist messages and anti-immigration rallies.

The monument periodically has been a target over the last two decades—it’s marked by bullet holes, and protestors have tried to topple it by tying it to a train on nearby railroad tracks. The statue is now protected by a heavily padlocked gate. Kershaw himself was not concerned with the opinions of those who wanted it taken down. “Somebody needs to say a good word for slavery,” he was quoted as saying to the Times-Picayune, according to the Times obituary.

Dorris, the landowner, told The Tennessean that hiding the statue is a “knee-jerk reaction” to the mass shooting in Charleston. He is apparently sticking with his long-standing position that racism is only in the eye of the beholder.