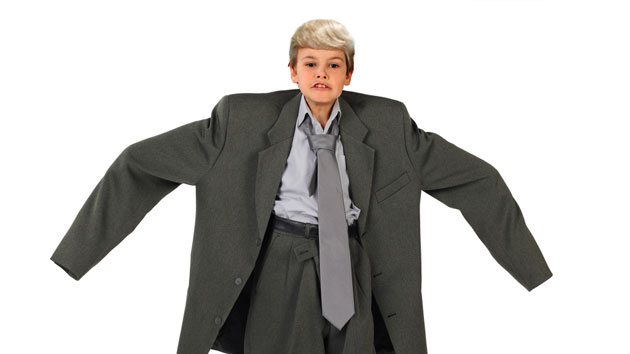 Between his juvenile name-calling, dubious boasts, short attention span, constant need for attention, and temper tantrums when things don’t go his way, Republican presidential candidate Donald Trump often resembles an oversized six-year-old. So far, that approach has helped him vault to the top of the field, and left his fellow contenders so desperate for attention they’re literally destroying documents with chainsaws. As Trump prepares for the first Republican primary debate next month in Cleveland, he is presenting himself as the ultimate wild card, capable of saying anything to anyone with little thought for the consequences.

That can pose problems for candidates and debate moderators, who are used to dealing with fully grown adults and have struggled to respond to his campaign-trail antics. To understand how Jeb Bush et al. might best react to a Trump tantrum on the debate stage next month, I reached out to someone with expertise on dealing with six-year-olds: an actual public-school kindergarten teacher.

Our teacher is from New York, like Trump, and has (like everyone else, apparently) been granted anonymity to speak candidly without being called a “dopey clown” by Trump. Here’s an abridged email transcript:

MJ: Is it fair to say you’re used to dealing with childish behavior?

Public-school teacher: I teach kindergarten, but have also taught 2nd grade and Pre-K in the past. Childish behavior is my milieu.

MJ: What is an example of the childish behavior you deal with in a typical day?

PST: Extreme neediness would probably be the defining characteristic. It is a constant barrage of very small people constantly saying my name, pulling at my clothing, pulling on my body in general. If those efforts fail to get my attention, it escalates to yelling, interrupting others who have my attention at that particular moment, and sometimes a little bit of elbowing to the front of the line. They all want to be first, they all want to be in charge, and few of them understand that nobody gets to be “the best” all the time. This is how things are at the beginning of kindergarten; by the time a few weeks have passed, the children have learned that things don’t work that way.

MJ: What kinds of insults do students like to use at that age?

PST: I am extremely strict about how the students treat each other (always with kindness), so this issue doesn’t arise very often. But the few times it has, they usually either make up something totally nonsensical, or repeat something that they have heard their parents say at home, or sometimes things they have heard on TV. I’ve heard everything from “poopyhead” to “motherfucker.”

“I have found that most kids are ‘reformed’ very quickly when they take some time to consider how their unkind words make others feel.”

MJ: What are some tips you have for dealing with this kind of name-calling?

PST: Find out the motivation, teach empathy, provide time to think about the effects of name-calling, suggest (but not force) an apology if the student doesn’t come up with this idea on his/her own. If it continues to be a problem, treat it not as a momentary lapse in self-control or poor judgement, but as a negative choice that deserves negative consequences. If improvement is seen in a chronic offender, positive consequences (praise, recognition of behavioral improvement) should be offered. Either type of consequence needs to be doled out swiftly.

MJ: So say I’m a student, and I call another student a “no-good rotten traitor.” What happens then?

PST: It depends on how mature the students are, how far along in the year it is, etc. In most cases, I would probably watch to see how the insultee (is that even a word?) reacts. If he/she handled the situation adequately, I would probably let it go and keep an extra close eye on the insulter (again…a real word?). If I had to intervene, I would go through the steps listed above, and probably assign the student some thinking time during recess (during which the student is not allowed to play–the student has to think about what he/she did to land in thinking time, tell me why it was wrong, and how it should be handled in the future; anyone who doesn’t come up with an adequate answer needs to think longer). If it was a chronic issue, I would also contact the parents to make them aware of the situation. In extreme cases, I would have the student speak with an administrator and would create a behavior modification plan.

MJ: Do kids generally grow out of this kind of thing?

PST: Not unless they are taught that it’s inappropriate. Kids who are rude will continue to be rude until someone teaches them that’s it’s not okay, and takes the time to show them a different way. Fortunately, I have found that most kids are “reformed” very quickly when they take some time to consider how their unkind words make others feel.

MJ: If someone has been doing this kind of thing for 30 years, do you think that would be cause for alarm?

PST: Clearly. I see only four reasons why an adult would resort to name-calling on a regular basis:

1. Said person is a sociopath who has no ability to empathize

2. Nobody ever took the time to teach said person that there are better way to deal with conflict

3. Said person has been a victim for so long that he or she is constantly on the defensive and is actively trying to drive others away

4. Said person is an asshole

Reasons 1-3 make me feel sad for that person. Reason 4 does not.