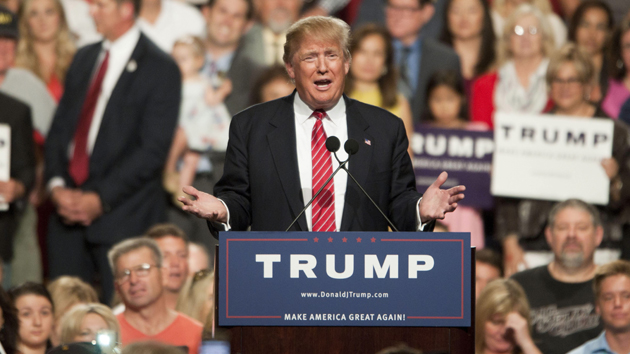 My good pals at Huffington Post have announced a momentous decision: No longer will they treat Donald Trump—a.k.a. @realDonaldTrump—as a serious political candidate and afford him coverage in its news and politics verticals. Instead, they will relegate the tirade-prone and traffic-generating tycoon to the entertainment section. I’ll let them explain:

After watching and listening to Donald Trump since he announced his candidacy for president, we have decided we won’t report on Trump’s campaign as part of the Huffington Post‘s political coverage. Instead, we will cover his campaign as part of our Entertainment section. Our reason is simple: Trump’s campaign is a sideshow. We won’t take the bait. If you are interested in what The Donald has to say, you’ll find it next to our stories on the Kardashians and The Bachelorette.

Trump has indeed turned an important event—a major political party selecting its presidential nominee—into a stretch Hummer-sized clown car. A Trump-dominated GOP contest does have the feel of a super-charged reality show, with political consumers (that is, the audience) on the edge of their seats, eagerly awaiting the next Trump tweet—Trweet™—blasting another foe or critic. (“Hey Pope Francis, you suck!”) Trump is campaigning as a bombastic buffoon, playing to the crowd and inspiring love-hate viewing. Yet, I believe my dear comrades at HuffPo (and I hope they will link to this article) are wrong.

It’s not that Trump is truly a statesman who ought to be regarded as such. But he is a political phenomenon that tell us much about a significant slice of the American public: Republican voters. It is indeed a drop-dead serious matter that a large bloc of GOPers—perhaps a plurality, depending on which poll you prefer—would entrust this nation to Trump. And the fact that Trump’s demagoguery is prevailing at this early stage of the Republican presidential race is a measure of how far the tea party shift in the party has gone—and how this ideological extremism has developed deep roots within the GOP.

Trump is not a problem for the Republicans because of his excessive, made-for-headlines, provocative (or racist) pronouncements. (He’s gone from birther to Mexican-basher.) He’s a problem because one out of six or so Republicans are exclaiming, “Yeah, what he said!” If Trump were polling at the same level of, say, Ohio Gov. John Kasich (2 percent), he certainly would deserve minimal notice. But his muscular showing in Republican voter surveys—which will land this media-savvy say-anything egomaniac on the GOP debate stage—is a sign that tea party extremism (which often comes with a racial component) still grips the Republican party. He’s not a carnival barker outside the tent. He holds sway over one of the rings of the GOP circus. The center ring? Maybe not. But for years, the Republicans have exploited and banked on paranoid, angry, and resentful tea party-ish voters. They played footsie with the irrational Obama-haters who believed in death panels and all the secret-Muslim-socialist-born-in-Kenyan-dictator-take-away-your-guns-let-illegals-in-and-destroy-America crap. This is how they gained control of the House and then the Senate.

Well, this crowd wants more red meat. And Mr. You’re Fired has identified this market and seeks to satisfy the demand.

To Arianna and all my wonderful friends at Huffington Post, I understand the impulse to say we won’t allow Trump to transform the race into a freak show—TrumpTV™—but I most respectfully submit that to exile Trump to the realm of the Kardashians is to let the Republican party off the hook too easily. Trump poses a crisis for his party. It may be entertaining for the Democrats to watch. But this crisis is not transpiring in TMZ-land. It’s what the GOP has brought upon itself. Here is the ROI on the GOP’s extreme politics.

Ultimately, the story is not Trump, but the Trumpers™ who were encouraged and used by the party—remember when House Speaker John Boehner held an anti-Obamacare rally at the Capitol and the tea party crowd chanted, “Nazis, Nazis” about the Democrats?—and who now crave more and will not settle for a Jeb Bush or Scott Walker. As of now, Trump, with all his bluster and bleating, is their celebrity champion, the contestant they embrace and root for. And that’s no sideshow.