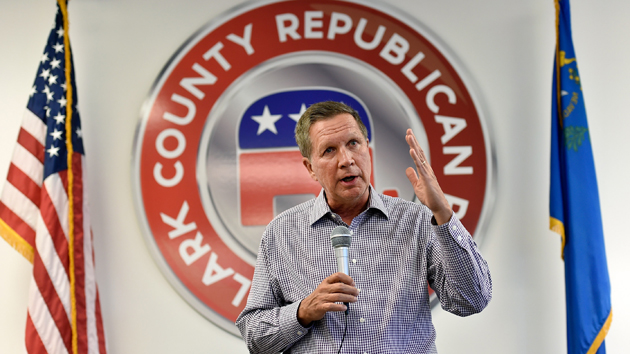 After months of hinting at a possible presidential campaign, today Ohio Gov. John Kasich will make it official when he appears at Ohio State University, his alma mater, and announces his run for the GOP nomination. The 16th GOP contender in a field filled with big personalities, Kasich is wasting no time in beginning his tour of key primary states. He will leave Ohio State to campaign in Iowa, New Hampshire, South Carolina, and Michigan.

As a two-term governor of Ohio and a congressman for 18 years, Kasich has been in public life for over three decades; still, he is not nearly as well known as Bush, Trump, Christie or many of his other competitors. But Kasich has pondered a presidential bid before. In 1997, when he chaired the House Budget Committee, he launched an “exploratory” campaign and two years later declared that he was thinking about throwing his hat in the ring. Several months later, he un-declared and announced his support for then-Texas Gov. George W. Bush. But he said the dream wasn’t over. “Don’t go away. Don’t give it up.This just isn’t your time,” he told a crowd of supporters at the Ronald Reagan Federal Building.

Here’s a rundown of the things you should know about the newest presidential hopeful who seems to think his time has finally come:

He and Jeb are the same but different: Kasich is often compared to Jeb Bush the other “establishment Republican” in the race. Both men will likely be targeting the same voters and donors, which also means they will get asked about each other a lot. “I’m done talking about Jeb Bush, OK? I like Jeb,” Kasich told Politico at a republican donors retreat in Park City, Utah last month, when asked for the umpteemth time about Bush. They do have a few things in common. Both candidates are more open to federal involvement in the states. Kasich and Bush have taken heat for their support of Common Core, a set of education standards that many GOPers (including Rick Perry and Marco Rubio) have denounced as a federal encroachment into the classroom. In 2014, Kasich also ruffled GOP feathers when he supported the expansion of Medicaid through the Affordable Care Act. (Jeb Bush was not in public office at this time and as Florida governor did not have to address the question of Medicaid expansion.)

He’s different from the current GOP on some big issues: In November Kasich said he was open to Obama’s immigration plan, which would temporarily protect 5 million immigrants from deportation. This stance sets him apart other GOP candidates, including Trump and Cruz, who have fiercely assailed immigration reform. He seems more liberal when it comes to gay marriage, saying in a spring CNN interview that if the Supreme Court ruled in favor of same-sex marriage he would have no problem attending a gay friend’s wedding.  (He stayed true to his word, attending a gay marriage on July 3, a week following the Supreme Court’s groundbreaking ruling).

He’s no moderate on reproductive rights: While Kasich has often been portrayed as someone willing to work with Democrats for compromise to avoid DC gridlock, his stance on abortion and female reproductive rights is not so flexible. During his five years as governor, Kasich, a staunch Catholic, has signed 11 bills into law that drastically restrict abortion access in Ohio. Since 2011, half of Ohio’s 16 clinics have closed, and according to the Columbus Dispatch three of the remaining eight are in risk of closing if they cannot find a hospital within 30 miles willing to enter a transfer agreement. Kasich is now pressing the Ohio legislature to pass a 20-week abortion ban.

Kasich has a long résumé:  The two-term governor received almost 65 percent of the votes in his reelection victory last November and insists that his experience as governor and a congressman set him apart from the other presidential candidates. In a recent interview with Jonathan Karl on ABC’s This Week, Kasich said that he believed he was the “most experienced in field.” He noted that in Ohio he has had to deal with a variety of complex issues, including police shootings. When he was not an elected official, he spent over five years as a managing director for Lehman Brothers before it collapsed in 2008. From 2001 until 2007 he hosted his own Fox News show: From the Heartland with John Kasich.

Kasich is a big fan of balanced budgets: In February Kasich went on a multi-state tour where he pressed states to pass a balanced budget amendment to the US Constitution. (He needs 34 states to make this dream a reality; 27 states have do so thus far.) Kasich has also backed a non-profit, Balanced Budget Forever, devoted to the cause. The budget hawk, credits Ohio’s falling unemployment rate to his attention to numbers. Under his watch Ohio’s unemployment rate fell below the national average and hit 5.1 percent in April 2015—an improvement to when he entered office in January 2011 and it was hovering at nine percent.

Except sometimes when balanced budgets backfire: Kasich’s state budget has not always been a positive talking point. In May 2011, a few months after taking office, Kasich’s approval ratings plummeted to 33 percent and Mother Jones writer Mac McClelland, who wrote about Ohio’s war on the middle class that year, says this decline was likely caused by Kasich’s proposed 2012-13 budget. According to McClleland, under Kasich’s plan the Ohio Department of Education was expected to lose 10.2 percent in funding and, as McClleland explained, a local think tank estimated “that 51,000 state jobs are at stake. Local unions are panicking that the public employees who remain will have little control over their own futures, since Kasich effectively killed collective bargaining in a bill called SB 5 shortly after he took office.” Kasich rebounded, winning nearly 70 percent of the votes in the 2014 election. Politico notes that his victory had more to do with external factors, including his sub-par opponent and Ohio’s historically low voter turn-out that year.

Kasich has a temper: He is not one to bother with pleasantries. According to Politico, in 2014 during a donor dinner, Kasich was asked by the wife of a major financial backer about his support of expanded Medicaid. Kasich lashed out: “I don’t know about you, lady. But when I get to the Pearly Gates, I’m going to have an answer for what I’ve done for the poor.” Twenty possible donors walked out of the room. According to an Atlantic profile on Kasich, once a top Ohio GOP donor swore he would never donate a dime to Kasich’s campaign because he found the governor “unpleasantly arrogant.” That article reported that Kasich’s press secretary had sent the journalist a thesaurus entry for the word “prickly,” assuming that the reporter would need it when writing a piece on Kasich. “He does have a tendency to ready-fire-aim,” Mike Hartley, a former Kasich administration official who helped with his 2010 governor campaign, told the Atlantic‘s Molly Ball. “But here’s the thing—he makes things happen. His will is tremendous, and he gets people to follow him. He’s an ass-kicker.”