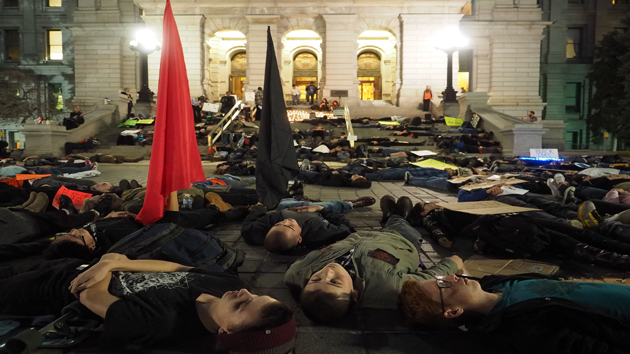 Students participate in a "die in" outside Colorado's state capitol in Denver in December 2014 as one of many nationwide in the wake of officer Darren Wilson shooting and killing Michael Brown in August 2014 in Ferguson, Missouri. The subsequent national conversation about police brutality in the US has largely ignored the suffering of the Native American community at the hands of police.Michael Rieger/ZUMA

Nearly 100 people demonstrated in downtown Denver earlier this week after police there shot and killed 35-year-old Paul Castaway on July 12. Police said the man was coming towards an officer with a knife, but his family and witnesses on the scene dispute those claims and say he was pointing the knife toward himself.

The shooting comes a little more than a month after two Denver Police officers were cleared in the shooting death of Jessie Hernandez, a 17-year-old girl killed in January when the officers fired into a stolen car she was supposedly driving toward them in an alley.

According to his mother, Castaway struggled with schizophrenia and alcoholism. Witnesses say he was holding a knife to his own throat and didn’t threaten officers, according to the Denver Post. Castaway was shot four times and died later that night. Denver Police Department spokesman, Sonny Jackson, told the Post that the department is reviewing the incident, and that the officers involved will be named soon.

Castaway was a Lakota Sioux. His death brings up a rarely-discussed aspect of the ongoing conversation around police brutality in the United States: Native Americans are more likely than most other racial groups to be killed by police. Indian Country Today noted that according to the Center on Juvenile and Criminal Justice, a nonprofit organization that studies incarceration and criminal justice issues, police  kill Native Americans at a higher rate than any other ethnic group.

The center’s analysis relied on data from the Centers for Disease Control and Prevention and the National Center for Health Statistics. It found that Native Americans, making up just .8 percent of the population, are the victims in 1.9 percent of police killings. When the numbers are broken down further, they reveal that Native Americans make up *three of the top five top age-groups killed by law enforcement: 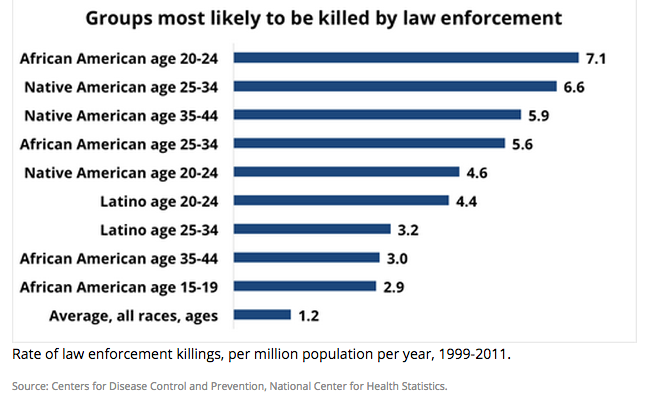 Center on Juvenile and Criminal Justice

“This is a reflection of an endemic problem in the perception of non-white people when it comes to the administration of justice,” Chase Iron Eyes, an attorney with the Lakota People’s Law Project in South Dakota, told Mother Jones. The group put out a report called “Native Lives Matter” in February discussing various ways the justice system disproportionately impacts Native Americans. He said the US Department of Justice needs to address police violence against Native Americans and that Castaway’s death is only the most recent example of the problem.

“You can tell they’re shooting out of fear,” he said. “If it’s not out of hate, for some reason they’re pulling the trigger before determining what the situation actually is. Something does need to happen. Somebody does need to take a look and we need help.”