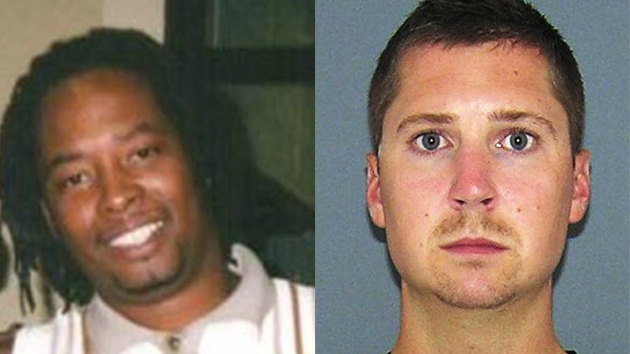 University of Cincinnati Police Officers Eric Weibel and Phillip Kidd corroborated Officer Ray Tensing’s seemingly false account of what happened before he shot and killed unarmed black man Samuel DuBose on July 19. After damning body cam footage was released, Tensing was charged with murder. But questions remain about Weibel and Kidd’s role. And this is not the first time the duo have been involved in the death of an unarmed black man. According to the Guardian, in 2010 they were involved in another police brutality case.

Kelly Brinson, a 45-year-old mental health patient at Cincinnati’s University hospital, suffered a psychotic episode on 20 January 2010 and was placed inside a seclusion room at the hospital by UC officers. He was then shocked with a Taser three times by an officer and placed in restraints. [Kelly] then suffered a respiratory cardiac arrest and died three days later.

Brinson’s family filed a a civil suit against UC police (and the hospital), accusing the officers involved in the incident of excessive force and of acting with “deliberate indifference to the serious medical and security needs of Mr. Brinson.” While neither Kidd nor Weibel deployed the Taser, they were involved in restraining Brinson, and were therefore two of the seven police officers named in the suit.

Following the death of Samuel DuBose after what should have been an innocuous traffic stop, both Kidd and Weibel corroborated Officer Tensing’s claims that he had been “dragged” by DuBose’s car, which is what prompted him to shoot the unarmed 43-year old. Kidd, who was standing behind Tensing during the incident, filed a report saying he saw Tensing get dragged by the car. Weibel, who was also on the scene, submitted another narrative corroborating these statements. “Officer Kidd told me that he witnessed the Honda Accord drag Officer Tensing, and that he witnessed Officer Tensing fire a single shot,” Weibel wrote. He added, “I could see that the back of his pants and shirt looked as if it had been dragged over a rough surface.”

The body cameras of both Tensing and Kidd, however, show something very different. “It is our belief that he was not dragged. If you slow down this tape you see what happens, it is a very slow period of time from when the car starts rolling to when a gun is out and he’s shot in the head,” Hamilton County Prosecutor Joe Deters said Wednesday when announcing the Grand Jury’s decision to indict Tensing on charges of murder.

No surprise that Brinson’s family is upset at the parallels. As the Guardian explains:

The revelation that officers Weibel and Kidd provided the corroboration for Tensing’s account of the incident was met with anger by Brinson’s family members, who told the Guardian on Thursday that if both officers had been disciplined correctly in 2010, the death of DuBose might have been avoided.

Brinson’s brother told the Guardian that their family had been told that the officers were “supposed to be fired” after his death. But the case was eventually settled out of court for $638,000 and the officers were kept on. Since the body cam footage of the DuBose killing was released, Kidd has been placed on administrative leave. On Thursday Tensing plead not guilty to charges of murder and voluntary manslaughter. The judge set his bond at $1 million.