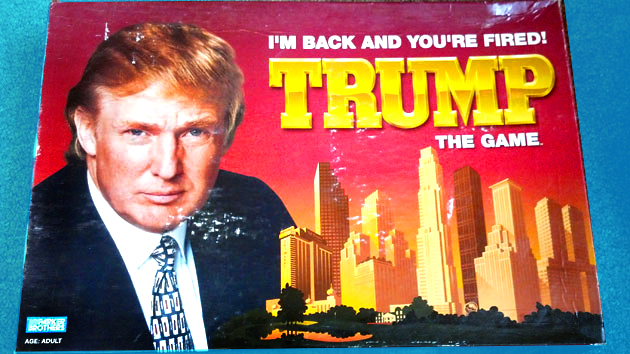 Donald Trump’s preparation for the upcoming Republican presidential primary debate is “low key, absolutely low stress,” adviser Chuck Laudner told the Washington Post on Wednesday. “This isn’t 50 consultants locked in a war room, with a fake podium and cardboard cutouts of the other candidates, playing the game of Risk.”

Maybe that’s because Trump has a different board game of choice—his own. In 2004, as his reality television show The Apprentice was just getting underway, he unveiled the latest in a long line of short-lived ventures. (Hello, Trump Steaks.) It’s called TRUMP: The Game, and according to an introductory letter from the billionaire that was included in a set I recently acquired for $4 on Amazon, “the object of the game is to make the most money.” Surprise! 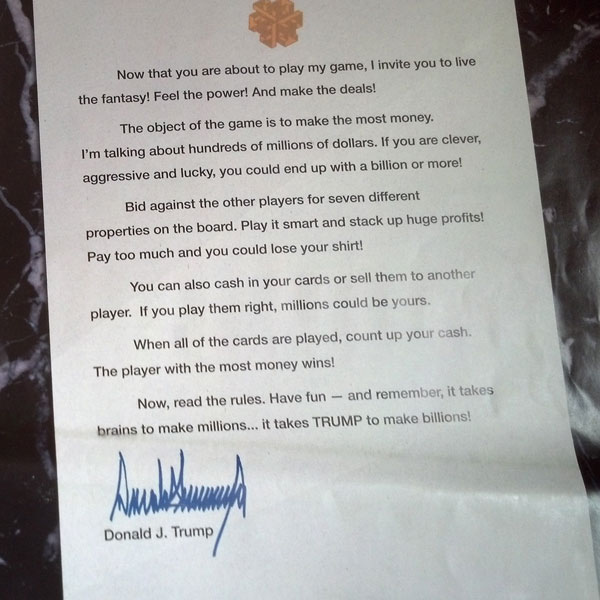 Live the fantasy! Feel the power! And make the deals! Photo by Tim Murphy

Much like his presidential campaign, TRUMP: The Game was a reboot of an earlier failed Trump venture, a 1988 Milton Bradley product also called TRUMP: The Game. The tagline for that was “It’s not whether you win or lose, it’s whether you win!” A television ad for TRUMP: The Game 1.0 boasted that all proceeds from the game would be donated to charity. (This was his Paul Newman phase, evidently.) The 2004 version abandoned the charitable pretense, and replaced the old tagline with a bolder, fresher take: “IT TAKES BRAINS TO MAKE MILLIONS. IT TAKES TRUMP TO MAKE BILLIONS.”

Did I have the brains to make millions? Did I have the TRUMP to make billions? Was I, in fact, Donald Trump? I recruited three Mother Jones political reporters—Pat Caldwell, Pema Levy, and Molly Redden—to help me take TRUMP: The Game for a spin.

Here are a few things you should know about the game: 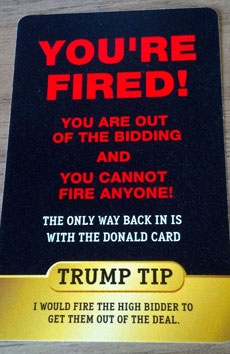 Don’t get any ideas! Tim Murphy 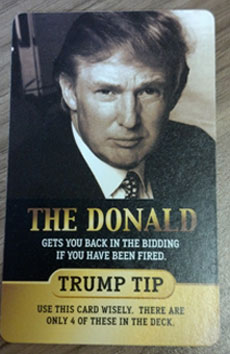 A “The Donald.” Tim Murphy 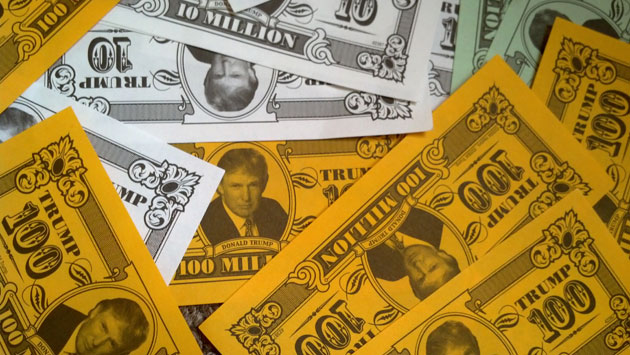 Our experimental game lasted a little more than an hour. If there’s an upside to TRUMP: The Game, it’s that it’s hard to envision anyone flipping the board over in disgust after six hours because it’s physically impossible for a game to last that long. At no point did anyone have any idea who was winning until Molly bought the casino. Luxury properties are Trump’s horcruxes; when the seventh one is taken off the board, the game ends. Molly won.

“I’m Donald Trump now,” she said. For a brief moment, I thought I saw a shadow fall across her face.

Afterwards, I asked our team of guinea pigs for their feedback:

“Nothing really happens,” Pat said. “I think I probably went around the board twice.”

“The thing about it is,” Pema continued, “it’s just a dumb game. Because you can’t really lose money. In Monopoly you can get really screwed by landing on other people’s properties. In this there’s very little moving around the board. And when you land on a property, the bank pays them instead of you so there’s no real risk.”

But the game’s flaws—its erratic nature, its contradictions, its singular obsession with the rapid accumulation of wealth for the purpose of acquiring luxury real estate and firing people—are also Trump’s flaws. And by the time we’d finished, there were a few signs that the experience of playing Donald Trump had begun to influence us in subtle ways. “I could see us all becoming ruthless and judging each other,” Pat said, after a moment of reflection. And more to the point, handling such huge quantities of money seemed to bring us closer, if just a little bit, to the luxurious lifestyle of the Republican front-runner. As Molly put it: “I stopped saying ‘million’ after a while and started treating them like normal denominations.”

Just don’t ask any of us to play it again.