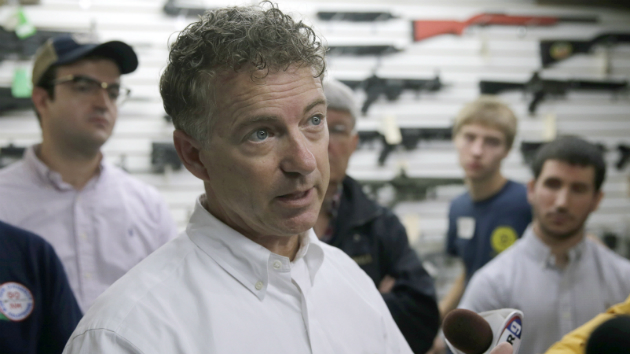 Cash is not an abundant resource for Rand Paul’s struggling presidential campaign these days. But the Republican Kentucky senator seems prepared to buy his way out of his most recent problem, promising to pay for an early Kentucky presidential primary vote in order to save his chances of keeping his Senate seat if the presidential bid falls through.

Under Kentucky law, a candidate cannot appear on the same ballot for two offices, and if Kentucky’s Republican Party holds its primary in May, as planned, Paul would have to give up either his bid for the White House or his bid to retain his Senate seat. The dilemma gets even thornier, because if Paul chooses to give up his Senate bid but doesn’t give the Kentucky GOP time to recruit an alternative candidate, it could cost the GOP a sure Senate seat. By May, Paul must either be confident enough of his chances in the presidential race to risk not running for Senate, or be sure he wants to return to the Senate. And to have a realistic shot at the presidential nomination, he will have to win Kentucky. Kentucky Democrats have already blocked Paul’s attempts to change the Kentucky law banning two simultaneous runs, and so Paul is left with one option if he doesn’t want to drop out of either race: moving the Kentucky presidential vote. Even if he has to pay for it himself.

In a letter to the state party earlier this month, Paul laid out his pitch in simple terms: He wants the date of the vote moved up, and he’s offering a pile of money to do it. Specifically, Paul promised his campaign would foot the estimated bill of $450,000 to $500,000, starting with an immediate payment, even though the money wasn’t immediately needed. He wrote:

I wanted to formally ask you once again to vote for this plan. Before you do, I wanted you to hear straight from me about the plan to fund it…I mentioned earlier this year that I would make sure it was fully funded without funding by the [Republican Party of Kentucky] or counties…In order to makes sure that happens, I have transferred $250,000 in an RPK account to begin the funding. Very little of that funding is needed this August, but I wanted to make sure there was plenty in there as we move forward.

Paul said he would transfer another $250,000 and pointed out that if the caucus charged campaigns $15,000 per candidate, it could bring in several hundred thousand dollars more—in other words, it could actually turn a profit.

This is no small commitment for Paul, whose fundraising has been lackluster. Based on campaign finance filings made by nearly all the campaigns and super-PACs in July, Paul ranks ninth of the 21 candidates (Republican and Democratic) who filed fundraising numbers. He reported having just $4.2 million in cash on hand. Considering that three other Republican candidates had at least twice that much in their coffers, Paul’s financial situation is precarious. He’s not getting much help from outside, either. The largest super-PAC supporting Paul is America’s Liberty PAC, which has raised just $3.1 million. That’s $100 million less than the amount Jeb Bush’s super-PAC has raised. And two weeks ago, the super-PAC’s top two operatives were indicted on campaign finance charges. (They pleaded not guilty yesterday.)

This plan does appear to be legal. A primary or caucus is organized by the party itself, and the party is free to choose its candidate however it wants, legal experts say. But there is another potential wrinkle in the plan: Paul hasn’t actually paid the money. Or at least that’s what local GOP officials have told Kentucky media outlets. Paul’s campaign told one Kentucky newspaper that the money is indeed set aside, just not available for use by the state party until the caucus plan is approved.