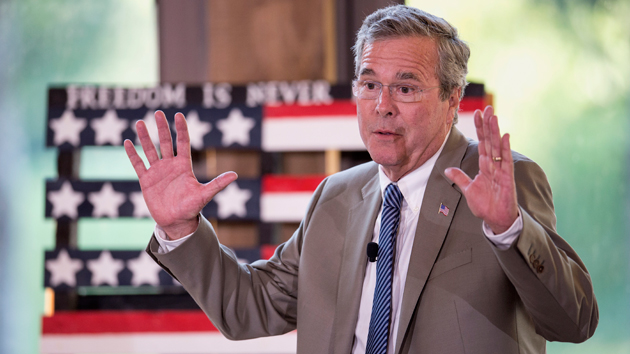 Jeb Bush is trying to pull off the mother of all chutzpah moves by blaming Hillary Clinton for today’s troubles in Iraq and the rise of ISIS.

Yes, you heard that right: The brother of the fellow who invaded Iraq on false premises, and who did so without a coherent and comprehensive plan for what to do after the defeat of Saddam Hussein, is trying to jujitsu this issue and heave his hefty family baggage onto the shoulders of the leading Democratic 2016 contender.

Three months ago, Jeb Bush couldn’t give a straight answer to a simple question about the Iraq War—a stumble that raised serious questions about his quest for the Republican presidential nomination. How could he be unprepared for such an obvious matter? And now—when he’s not faring so well in the polls and trailing Donald Trump and others—he’s attempting a new tack: pointing his finger at Clinton. Though this stunt wins Bush attention—the New York Times front-paged his attack with the headline, “Bush Asserts a Clinton Role in Iraq Decline”—it’s absurd.

In a speech at the Reagan library in California on Tuesday night, Bush declared:

No leader or policymaker involved will claim to have gotten everything right in the region, Iraq especially. Yet in a long experience that includes failures of intelligence and military setbacks, one moment stands out in memory as the turning point we had all been waiting for. And that was the surge of military and diplomatic operations that turned events toward victory. It was a success, brilliant, heroic, and costly. And this nation will never forget the courage and sacrifice that made it all possible.

So why was the success of the surge followed by a withdrawal from Iraq, leaving not even the residual force that commanders and the joint chiefs knew was necessary? That premature withdrawal was the fatal error, creating the void that ISIS moved in to fill—and that Iran has exploited to the full as well. ISIS grew while the United States disengaged from the Middle East and ignored the threat. And where was Secretary of State Clinton in all of this? Like the president himself, she had opposed the surge, then joined in claiming credit for its success, then stood by as that hard-won victory by American and allied forces was thrown away. In all her record-setting travels, she stopped by Iraq exactly one time.

First off, there remains a debate over whether the Iraq surge worked. Putting that aside, let’s focus on the question Bush asked: Why was the surge followed by a withdrawal of US troops from Iraq? The answer is simple: President George W. Bush arranged for that withdrawal.

In December 2008, Bush signed a Status of Forces Agreement with then-Iraqi Prime Minister Nouri al-Maliki. At a ceremony in Baghdad, Bush proclaimed:

The agreement provides American troops and Defense Department officials with authorizations and protections to continue supporting Iraq’s democracy once the UN mandate expires at the end of this year. This agreement respects the sovereignty and the authority of Iraq’s democracy. The agreement lays out a framework for the withdrawal of American forces in Iraq—a withdrawal that is possible because of the success of the surge. These agreements result from careful consultations with the prime minister and the officials of Iraq, as well as our diplomats and our military commanders. They represent a shared vision on the way forward in Iraq.

It’s undeniable: Jeb’s bro okayed and negotiated the removal of US troops from Iraq following the surge.

Jen Bush and neocons have argued that President Barack Obama—and now Bush is adding Clinton to the list—should have somehow subsequently managed to renegotiate a deal that would have allowed a sizeable force of US troops to stay in Iraq, and that presumably this would have prevented ISIS from sweeping in and gaining control of parts of a fractured country governed by a corrupt and inept regime. In May, Bush, while campaigning, claimed, “We had an agreement that [Obama] could have signed that would have kept 10,000 troops—less than we have in Korea—that could have created the stability that would have allowed for Iraq to progress.”

As Politifact.com noted, that statement was “mostly false.” When Obama entered office, he inherited the withdrawal plan that George Bush had drawn up with Maliki. The Obama administration did discuss with the Iraq government the option of leaving more troops behind. But in Iraq, that was not a politically popular idea, and the government in Baghdad refused to provide the customary immunity for US soldiers that would be based there. As the Los Angeles Times reported in July 2011, “Iraqi government officials are divided on whether the Americans should stay. Of the country’s major ethnic and religious groups, only the Kurds have come out publicly in favor of US forces staying. In private, Maliki is thought to want troops to stay, but his Islamic Dawa Party released a statement in mid-June declaring that American troops should honor the agreement to leave at the end of the year.” There never was a plan that Obama could have signed to keep 10,000 troops in Iraq. Without the Maliki government willing to bend on immunity, the negotiations between Washington and Baghdad broke down. What remained was the accord that George Bush signed and hailed.

The main problem, Jeb Bush said in his speech, was not the initial invasion and not the Bush-Cheney administration’s incompetent handling of the post-invasion challenges. It was, he insisted, Obama and Clinton’s failure “to be the peacemakers.” He added, “It was a case of blind haste to get out, and to call the tragic consequences somebody else’s problem. Rushing away from danger can be every bit as unwise as rushing into danger, and the costs have been grievous.” Not surprisingly, Bush linked this failure to the “terrible” Iran nuclear deal currently in the works.

Obama and Clinton didn’t rush out of Iraq. After the invasion, which was supposed to lead to a war that would last months at most, George Bush had several years to deal with the mess he created. He failed at that task, and then he could not negotiate a deal that would keep US troops there. (And who knows if that really would have helped?) When he exited the White House, Iraq’s government and military were neither truly stable nor able to protect the nation.

Obama and Clinton, when they took office, were bequeathed a situation with few good policy options. When someone torches a house, you don’t blame the people who move in afterward and try to repair the damage for the fire. Jeb Bush could pick an honest policy fight with Obama and Clinton about moves they made in the Middle East. Instead, he’s mounting an assault of distraction and false accusation that ignores basic historical facts. In essence, he’s saying, “In the end, my brother didn’t screw things up, you did!” Given that the invasion of Iraq was perhaps one of the most profound geopolitical miscalculations in recent decades, Jeb Bush certainly has a tough job slinking through this territory. Apparently he has decided the best defense is a strong offense, even if built on untruths. But when it comes to the Iraq War, that’s a family tradition.