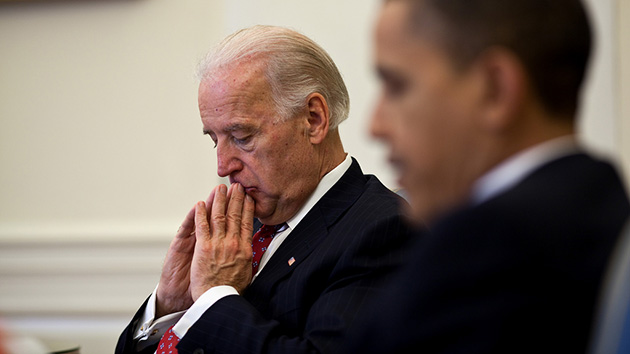 “Hillary and I both feel a special indebtedness for the friendship and the leadership of Joe Biden,” Bill Clinton said during a November 1994 campaign rally in Wilmington, Del., the evening before the midterm elections. “Without him, there would have been no crime bill this year. And because of him, lives will be saved and children will grow up safer and this country will be a less violent place in the years ahead. We are in his great and abiding debt.”

Then-Sen. Joe Biden had scored a career-defining victory that year. After a good deal of twisting the arms of his colleagues, Biden managed to shepherd the 1994 Violent Crime Control and Law Enforcement Act through the Senate.

Biden’s bill put over 100,000 new cops on the street and spent $9.7 billion on the construction of new prisons. The wide-ranging bill implemented a host of liberal policies, including an assault weapon ban and the Violence Against Women Act. But it also expanded the number of crimes that qualify as death penalty cases, encouraged states to keep inmates locked in jail*, criminalized gang membership, eliminated Pell Grants for inmates, and put in place mandatory drug testing for people on supervised release. States had to implement policies that greatly reduced opportunities for parole in order to qualify for the new prison funding.

Clinton was right that crime rates would soon drop. The exact cause for the nationwide decrease in crime is up for debate. (We at Mother Jones have a favorite theory.) But there’s little question that Biden’s law helped cement the nation’s system of mass incarceration. “We took a shotgun to it and just sent everybody to jail for too long,” Clinton says now of the bill.

Joe Biden is reportedly eyeing a 2016 campaign bid to challenge Hillary Clinton, with a final decision expected early next month. There’s a Draft Biden super-PAC that has been agitating for Joe, pushing him as the more genuine alternative to Clinton, who’s perceived as over-manufactured by poll-driven talking points.

Yet should he enter the race, Biden will face a Democratic electorate that has grown increasingly concerned with mass incarceration and the disparities minorities face in the criminal justice system. The issue has already bedeviled a few of Biden’s potential Democratic opponents, who have struggled to answer questions about race and justice. At the liberal confab Netroots Nation last month, Vermont Sen. Bernie Sanders and former Maryland Gov. Martin O’Malley were both shouted down by Black Lives Matter protestors who challenged the presidential candidates over whether they could confront structural racism, with both offering answers that didn’t satisfy the activists. Hillary Clinton’s campaign has been actively courting Black Lives Matter activists at events and in online postings.

Like many Democrats who served in the 1980s and early 1990s, Biden has a complicated history with the criminal justice system. As crime rates spiked across the country, Democrats adopted a harsh tough-on-crime posture. Yet few pushed the issue quite as hard as Biden. During the 1980s he was a staunch advocate for ramping up the war on drugs. Biden devised the national “drug czar” position and worked alongside Republicans during the Ronald Reagan years to craft oppressive anti-drug laws, including co-sponsoring the law that instituted far longer prison terms for possession of crack cocaine than of powder cocaine. In The New Jim Crow, Michelle Alexander called Biden “one of the Senate’s most strident drug warriors.”

“There’s a tendency now to talk about Joe Biden as the sort of affable if inappropriate uncle, as loudmouth and silly,” Naomi Murakawa, author of The First Civil Right: How Liberals Built Prison America, said in an interview with The Marshall Project. “But he’s actually done really deeply disturbing, dangerous reforms that have made the criminal justice system more lethal and just bigger.”

Biden’s anti-crime efforts culminated in the massive crime bill he pushed through the Senate in 1994. Crime rates had peaked a few years earlier, and the country was on edge following the Rodney King riots. “It was a time in our criminal justice history that people were very scared,” says Lauren-Brooke Eisen, Senior Counsel at the Brennan Center’s Justice Program. “A lot of this had to do with the media, and fear. But it was a time when there was more violence, there was more crime, and the urban centers were part of this crack epidemic. A lot of people were scared of what was happening. Since then, crime has been cut in half, and at the same time we’ve increased our jails and prisons. We now incarcerate 2.3 million people.”

Biden had actually turned against mandatory minimum sentences by the time the 1994 crime bill came up. “I think we’ve had all the mandatory minimums that we need,” he said in 1993. “We don’t need the ones that we have.” But his crime bill increased mass incarceration by pushing states to keep felons locked away for longer periods of time. In order to receive the law’s funds dedicated to constructing new prisons, states had to adopt truth-in-sentencing laws: policies that reduce options for early parole and generally force inmates to serve at least 85 percent of their original sentences. Before the crime bill, just five states had those strict policies on the books. Within five years of the crime bill, 29 states had adopted truth-in-sentencing provisions.

“The country had already been on this trajectory of creating more draconian sentencing policies,” Eisen says. “And then the crime bill was so significant because they incentivized the states to create harsher penalties.” Those harsher penalties led to an explosion in the prison population, which has doubled since the early ’90s.

In addition to keeping people in jail longer, Biden’s crime bill also made it harder for them to reenter society once they were released by ending the Pell Grants that had allowed inmates to receive further education while imprisoned. “All of the research indicates that education increases post-release employment, reduces recidivism, improves reentry outcomes,” Eisen says. “The research is there that cutting Pell Grants for inmates and eliminating this education funding is just not smart policy.”

Biden shifted his position as crime dropped and Democrats’ focus turned to concerns over mass incarceration. In 2007, Biden and Republican Sen. Arlen Specter introduced and helped pass the Second Chance Act, which directed grants to states for programs to ease reintegration into normal life for inmates once they leave prison. The law gave money to substance abuse treatment programs and nonprofits focused on mentoring convicts.

As Barack Obama’s vice president, Biden has continued to move away from the tough-on-crime language. Speaking on Martin Luther King Jr. Day this year, Biden said that cops and minority communities need to bridge their divides. “We need to agree in this nation on two basic statements of truth,” Biden said. “Cops have a right to go home at night to see their families. And two, all minorities, no matter what their neighborhood, have a right to be treated with respect and with dignity. All life matters.” During a police conference later that month in Washington, DC, Biden suggested that tensions between cops and the communities they police had been overblown. “This is not nearly as bad as it has been in the past,” Biden said. “The press exaggerates how far off this is. But we have to nip it in the bud.”

Earlier this year, Biden contributed an essay to a collection titled Solutions: American Leaders Speak Out on Criminal Justice, compiled by the Brennan Center for Justice. The book assembled thoughts on criminal justice from a host of 2016 candidates. Hillary Clinton wrote that the country had “allowed our criminal justice system to get out of balance, and I hope that the tragedies of the last year give us the opportunity to come together as a nation to find our balance again.” Marco Rubio said that the US needs to “reduce the number of crimes.” Rand Paul called for ending mandatory minimums, noting that “our criminal justice system traps nonviolent offenders—disproportionately African-American men—in a cycle of poverty, unemployment, and incarceration.”

Biden? He touted the old community policing policies from his 1994 bill.

*An earlier version of this article incorrectly stated that the 1994 crime bill increased mandatory minimum sentences.