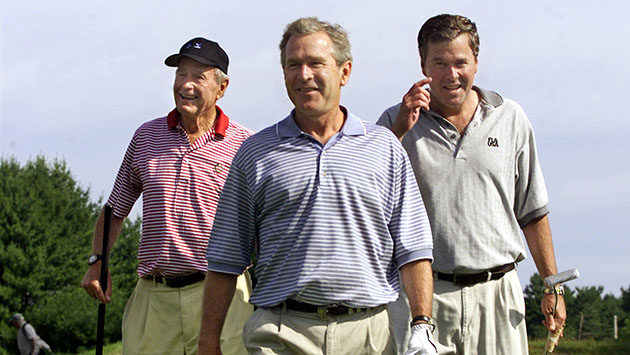 Like his fellow GOP presidential contenders, Jeb Bush has fiercely condemned Planned Parenthood in the wake of hidden-camera videos purporting to show the nonprofit’s employees discussing the sale of fetal tissue. In addition to pushing for a congressional investigation into the group, he has called on the next president to halt the more than $500 million in annual federal funding that it receives, and to redirect those funds to other women’s health organizations. But lost in the polarized debate over Planned Parenthood is a fact that Bush would likely prefer not to highlight: His family, dating back to his grandfather, was instrumental in launching and securing federal funding for the group.

During the 1940s, when contraception was a controversial and largely taboo topic, Jeb Bush’s grandfather, Prescott Bush, was an active supporter of Planned Parenthood, which was founded by Margaret Sanger in 1921 as the American Birth Control League. In 1947, Bush served as treasurer of the group’s first national fundraising campaign—a move he would soon come to regret. In 1950, Prescott Bush narrowly lost an election for a US Senate seat in Connecticut after a columnist revealed his connection to the “Birth Control Society.” (He went on to win a Senate seat two years later.)

Prescott Bush’s defeat in 1950 made an impression on his son, who would go on to become a crusader in Congress for federal family planning funding. “My own first awareness of birth control as a public policy issue came with a jolt in 1950 when my father was running for the United States Senate,” George H.W. Bush wrote in the foreword to a 1973 book on the importance of family planning in the developing world. As a congressman from Texas from 1967 to 1971, the future president championed federal funding for groups including Planned Parenthood and access to family planning for all Americans. His dedication to the issue earned him the nickname “Rubbers.” In the 1973 foreword, Bush recalls being inspired by the congressional testimony of the president of Planned Parenthood, Alan Guttmacher, who had pushed for federal family planning funding in the late 1960s. Bush became a principal Republican backer of the 1970 family planning legislation that created Title X, the program through which millions of federal dollars flow every year to Planned Parenthood—the same money his son now wants to redirect or cut back. The legislation passed with bipartisan support and was signed by a Republican president, Richard Nixon.

In 1971, Nixon made Bush an ambassador to the United Nations, where he embraced the issue of population control and the newly created UN Population Fund, which supports family planning services around the world. “Success in the population field, under United Nations leadership, may, in turn, determine whether we can resolve successfully the other great questions of peace, prosperity, and individual rights that face the world,” he wrote.

From the experience of his father, Bush learned that birth control was an important public policy issue—but potentially also a politically deadly one. As the Republican Party moved to the right in the 1980s, so did Bush. As Ronald Reagan’s vice president, he embraced the GOP’s anti-abortion platform. When he became president in 1989, he continued Reagan’s policy of cutting off US funding to the UN family planning effort—the very program he had championed during the previous decade—and blocking US funding for family planning organizations abroad that provided abortion services or information about abortion. President Bill Clinton lifted these restrictions, but Bush’s eldest son, President George W. Bush, reinstated them. Though Bush II was pro-life, he increased Title X funding in 2007.

As governor of Florida from 1999 to 2007, Jeb Bush cut family planning funding and programs to spread awareness about birth control. In his first year in office, he used his line-item veto power to cut $500,000 for a model teen pregnancy prevention program in South Florida operating out of the local Planned Parenthood office. In 2001, Bush axed more than $300,000 in family planning funding for poor women that had been administered by Planned Parenthood. That same year, according to the St. Petersburg Times, Bush proposed taking $1 million from the state’s $5.7 million family planning funds and redirecting it toward teen “abstinence-only” programs that prohibited instructors from discussing birth control—the same kind of information his father had pushed to make more widely available. Even Republicans were squeamish about a teen chastity program that barred any mention of contraception, and Bush’s proposal was never adopted.

Jeb Bush also signed a law banning the procedure known as partial-birth abortion in the state, approved “Choose Life” specialty license plates, and signed a parental-notification law for minors seeking abortions. In 2003, Bush intervened in the case of a mentally disabled rape victim who had become pregnant, pushing for a court-appointed guardian for the fetus, even though the woman was not seeking an abortion. A court ultimately blocked his request. Later that year, when Bush waded into the case of Terri Schiavo, a brain-dead woman whom the Christian right fought for years to keep alive, he boasted that he was “probably the most pro-life governor in modern times.”

Despite his anti-abortion record, Jeb Bush has struggled to gain the support of evangelicals in the first months of his presidential bid. While his family name brings with it money and connections, it also evokes moderate Connecticut Republicans who are socially liberal. (Former first ladies Barbara and Laura Bush are pro-choice.) Despite Jeb Bush’s conservative record as governor, the right wing of the GOP is always looking for evidence that he is not as conservative as he says.

Two weeks ago, the right found its smoking gun: A pro-life news site revealed that Bush had served as a director of the Bloomberg Family Foundation at the same time that the charity gave tens of millions of dollars to Planned Parenthood. Questioned about this during the first Republican primary debate on Thursday, Bush claimed his role was not to approve the budget line by line, but as a whole, and he said he was unaware of the Planned Parenthood funding. It was a familiar scene—a politically ambitious Bush. Then he reiterated his stance on abortion: “My record is clear. My record as a pro-life governor is not in dispute. I am completely pro-life.”

The Planned Parenthood controversy isn’t likely to fade away anytime soon. As if the Bush family name didn’t carry enough baggage to begin with, the clan’s past role in assisting Planned Parenthood is yet another political land mine that Jeb Bush will have to tiptoe around.