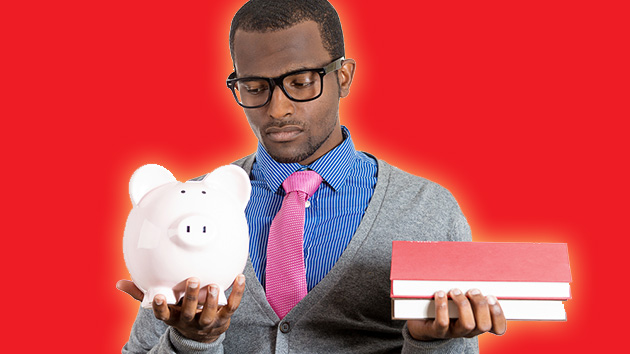 Many universities spend way more managing their investment portfolios than they do helping students with tuition.<a href="http://www.shutterstock.com/pic-177670190/stock-photo-portrait-of-young-student-holding-books-in-one-hand-piggy-bank-in-other-looking-thoughtful.html?src=FxbbcgNg0jM9sPDV5bCSTQ-1-53">pathdoc</a>/Shutterstock

For the tens of thousands of college students who are taking out another year’s worth of debt in preparation for the start of classes, here’s a rage-inducing data point: Many universities spend way more managing their investment portfolios than they do assisting students with tuition.

A New York Times op-ed published Wednesday by Victor Fleischer, a law professor at the University of San Diego, lays out this disparity. Fleischer cited Yale University, which paid its fund managers nearly $743 million in 2014 but gave out just $170 million in scholarships. He also noted that many universities, large and small, public and private, show the same imbalance in spending. “We’ve lost sight of the idea that students, not fund managers, should be the primary beneficiaries of a university’s endowment,” he writes. “The private-equity folks get cash; students take out loans.”

Fleischer provided Mother Jones with more of his data, which is gleaned from tax forms, financial statements, and annual reports. Here’s how the numbers shake out at Harvard, Yale, Stanford, and Princeton. On average, these four wealthy, elite universities spend 70 percent more on managing their investment portfolios than they do on tuition assistance. (Complete scholarship data for 2014 was not available, and some investment management fees are estimated.)

That disparity is even more glaring when you consider the tax benefits fund managers derive from working with universities. Fleischer notes that investors typically pay their fund managers about 20 percent of their investment profits. That money, called carried interest, is taxed at a lower rate for fund managers, who can claim it as capital gains instead of income.

Some universities justify the high management fees by arguing that they ensure top financial performance for their endowments. It’s true that these portfolios have done quite well: Harvard’s endowment is nearly $36 billion, and Yale’s is more than $25 billion, a 50 percent increase since 2009. But, writes Fleischer, a little less endowment hoarding and a little more spending, both on financial aid and other educational goals, would still allow universities’ money to grow generously while eliminating the hefty tuition increases that force students to take on burdensome debt.

Fleischer proposes that when Congress moves to reauthorize the Higher Education Act this term, lawmakers should require universities with assets greater than $100 million to spend 8 percent of their endowment each year. Even doing that, universities would likely continue to get exponentially richer. As he notes, the average endowment has grown 9.2 percent annually for the past 20 years (after accounting for 4 percent annual spending), a more than respectable rate of return.

Elite schools do offer need-blind admission and some of the best financial aid for low-income students. But for many students, tuition increases still mean more loans: On paper, many middle-class students often don’t qualify for large scholarships, but their families also can’t afford more than $50,000 in annual tuition. More generous allocation of endowments could help to roll back that trend while also funding more teaching and research. As Fleischer writes in the Times, “Only fund managers would be worse off.”