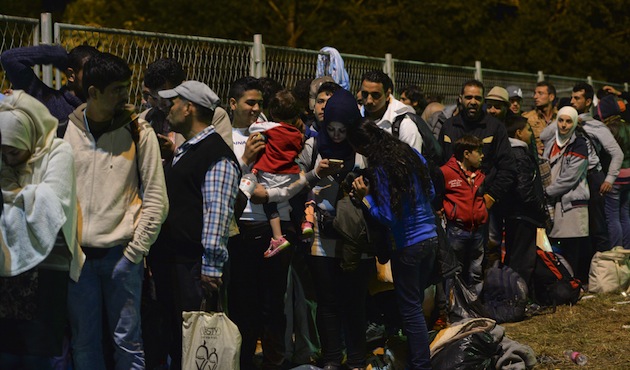 On Monday, a 19-year-old Syrian named Yazan was constantly on the move, racing through four European countries in less than 24 hours. On Tuesday, he sat marooned for hours in southeastern Croatia, watching a crowd of refugees try to squeeze their way into a new processing center that promised food, water, and medical checks.

“They’re saying they’ll let 20 people inside” at a time, he said. “But they’re lying, actually.” It was his eighth hour lounging in a field that had grown scorching hot, next to the center in the village of Opatovac. He’d seen refugees tussling with Croatian police that morning, and then heard promise after promise that the small groups could start coming inside the center in “just a few minutes.” He figured 40 people of the hundreds waiting might have made it in, but more likely none did. “Just lies. Lies, lies, lies.”

Yazan, who asked that his last name not be published because of safety concerns for his family in Syria, had only stuck around because his aunt was still inside. Both had walked the 15 kilometers to Opatovac from the border crossing with Serbia at Tovarnik, but Yazan slowed down to help his aunt’s son, Nasser, who struggled with an injured leg. Neither of the two young men could see her or get in contact, but Yazan planned to wait until she appeared. Then he’d get as far away as he could, walking again if he had to. “Again and again until I get out of here,” he vowed.

The police told refugees there were already 5,000 people inside the camp, part of a bottleneck that has become less common on the refugee route through the Balkans. The crisis has bred drama, confusion, and occasional violence as Syrians, Iraqis, Afghans, and others try to find ways north to friendlier countries. But large-scale incidents and unorganized migration are receding here. The route is becoming quieter and more static—if only comparatively—as individual governments try to pass the problem along to the next country rather than block the flow of migration.

Yazan and other refugees say they now board buses or trains that speed them from one border to the next. In Serbia on Monday afternoon, an assembly-line operation delivered a busload of refugees every few minutes from Macedonia to a cornfield outside the town of Šid, letting them hurry a couple of kilometers past a gauntlet of aid workers and a cemetery into Croatia. Even Hungary, which last week used tear gas and a hastily built border fence to keep out refugees, is now bringing its unwanted visitors to the border with Austria, where thousands are arriving every day. Today, Croatia is the major roadblock to a relatively smooth passage through the Balkans, the goal of almost all of the people here.

The Croatian government has wavered between welcomes and blockades. When the first refugees started arriving from Serbia last Wednesday, Croatian Prime Minister Zoran Milanovi? said they were welcome to pass through his country. But the government planned for 20,000 refugees to come to Croatia over two weeks, a number wildly out of sync with the flow of refugees. When 13,000 showed up within just two days, Croatia tried to shut its border back down. Since then, it has sometimes let refugees walk through and at other times pushed them back, trying to relieve the pressure on the camp at Opatovac and other overcrowded facilities.

“Macedonia was simple,” said Omar Jassim Mohammed, a 26-year-old from Baghdad. “Come in, get out. Go, go, go!” But once he arrived in Croatia, he spent the night outside at the processing center in 45-degree weather, managing only 30 minutes of sleep and getting no answers from police officers as to where he might go next.

The problem has been compounded by the inaction of the European Union. EU interior ministers finally agreed on Tuesday to redistribute 120,000 refugees across its member countries, but more than 300,000 people have already applied for asylum in Europe this year, with many more having entered the continent. The plan passed over dissenting votes from Hungary, the Czech Republic, Romania, and Slovakia; the latter three will have to be forced into accepting their share of the refugees, but it’s not yet clear how that might happen.

Whatever the European Union does, it will not help Yazan and his cousin move more quickly. “He’s saying, ‘Stay away people, just for a few minutes,'” he said, listening to yet another announcement by the police. “They’re saying that since 2011.”