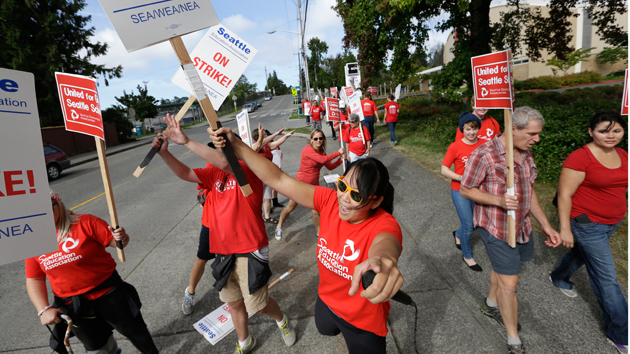 UPDATE: Monday, September 21, 2015, 11 AM, P.S.T.: On Sunday, the full membership of Seattle Education Association overwhelmingly voted to accept a new three-year contract with the Seattle School District after months of negotiations and six days of striking. The new contract not only includes a 9.5 percent raise over three years for teachers (down from the union’s initial proposal of a 10.5 percent raise over two years), but also non-salary items like 30 minutes of recess guaranteed for all elementary school students, the placement of equity teams in 30 schools, and the end of a teacher evaluation process based on standardized test scores. The union declared the contract a win for teachers, but the district did come away with a significant victory: a longer school day for students.

UPDATE: Tuesday, September 15, 2015, 6 PM, P.S.T.: Nearly twelve hours after Seattle’s school district and teachers union bargaining team reached a tentative agreement, the union’s leadership and representative assembly voted to recommend its ratification and end the strike. School will start on Thursday for Seattle students, but the strike won’t be officially over until Sunday, when the full union membership has a chance to vote on the contract agreement.

The SEA Representative Assembly has voted to end the Seattle Public Schools strike & to recommend ratification of… http://t.co/musbet4tFy

Seattle’s first teacher strike in 30 years appears to be nearing its end. After months of contract negotiations between the city’s school district and teachers union broke down, Seattle teachers unanimously voted to go on strike last Wednesday, shuttering the city’s schools for five days so far. Bargaining between the district and the teachers union resumed this weekend, and after negotiating through the night, the two sides reached a tentative agreement early this morning.

We have a tentative agreement with the district! Go to your picket site this morning to learn more! #SPStrike #SEAstrike #SeattleEA

Neither the district nor the union has released details of the agreement, and teachers will continue picketing today until the Seattle Education Association’s leadership can review the proposed contract and make recommendations to its membership of 5,000 teachers, specialists, paraprofessionals, and administrative workers. Here’s what’s at stake, for teachers and students alike, in the first teacher strike in a major US city since Chicago’s 2012 strike.

Why are Seattle teachers on strike?

The conflict between striking teachers and the school district is in part about teachers’ salaries. Seattle teachers have not received cost-of-living raises in more than six years, despite Seattle’s skyrocketing rents. Many teachers, whose salaries range from $44,000 to more than $86,000, have struggled to afford life in the city. Furthermore, the district wants to increase the length of the school day by 20 minutes without adequately compensating teachers for the extra time, according to union negotiators.

But the union’s grievances extend beyond pay. It is also seeking to address racial and social inequality in Seattle schools by setting up equity teams to study achievement gaps and discipline trends in 60 of the district’s 97 schools. Recess has also became a sticking point: At some schools, students get as little as 15 minutes for lunch and recess, forcing them to choose between food and play. Schools with more low-income students and students of color tend to have less recess than wealthier, whiter ones. The union wants the contract to ensure that every elementary school student gets at least 30 minutes of time to play outside the classroom. Finally, capping the caseloads for school psychologists and specialists, like occupational and speech therapists, who are often disproportionately overworked at underprivileged schools, is another demand.

The union’s proposed contract also addresses over-testing by imposing limits on the number of tests students take and increasing teacher involvement in deciding which tests are given and how they are used. A recent Mother Jones investigation found that the average American student now takes 10 to 20 standardized tests a year.

How did the school district respond?

It initially threatened to bring legal action against the teachers, but finally decided not to. Before negotiations resumed, members of the district’s school board argued that while they would like to pay teachers more, they “simply do not have the funds.” They pointed to a statewide education funding crisis that led the state supreme court to hold the state legislature in contempt for failing to fund basic education for Washington’s children. The state Supreme Court is currently fining the legislature $100,000 a day for not fulfilling its constitutionally mandated responsibility to fund schools adequately. Washington is one of seven states without an income tax; many people point to this as the main reason that the state hasn’t been able to come up with the money. Meanwhile, the school district has been using a patchwork of local taxes to raise funds to pay teachers.

The district has also argued that students need more classroom time in order to meet state standards, noting that Seattle schools already have among the shortest school days in the state.

So is this really just the state’s fault?

The union recognizes that lack of state funding is part of the problem, but the they have accused the district of exaggerating how much money teachers are asking for. They argue that despite the state funding fiasco, the school district can make budget adjustments that prioritize teachers and use some of the nearly $40 million that the legislature was able to allocate to the district earlier this year to allow teachers to earn a higher wage.

The issues in the contract dispute are part of a larger national debate over education that’s been playing out in Seattle, too. On one side, local billionaires like Bill Gates have spent hundreds of millions of dollars in recent years to push Common Core standards and testing in order to create data-driven ways to evaluate teachers and students. On the other side, teachers in Seattle and elsewhere have pushed back against overtesting, saying standardized tests are expensive, take up valuable class time, and measure racial and socioeconomic inequality better than aptitude.

Is this related to the state supreme court’s charter school ruling?

Last week, the state supreme court ruled that charter schools were unconstitutional because they use public funds without oversight from an elected governing board. This news is not directly related to the teacher strike, but many critics of using public money for charter schools, which were first made legal in Washington by a 2012 referendum, also oppose Common Core standards. And many Common Core advocates, including Gates, have also helped bring charter schools to Seattle. One charter school opened in Washington last year, and eight more were slated to open this school year, but their future is now uncertain.

Until union leadership reviews the tentative agreement and its members’ representatives are able to vote on the proposed contract, teachers will continue to picket and schools will continue to stay closed. If the contract is approved, schools could open their doors on Thursday, but there is still a chance it will be voted down. We will update this post as new details emerge.