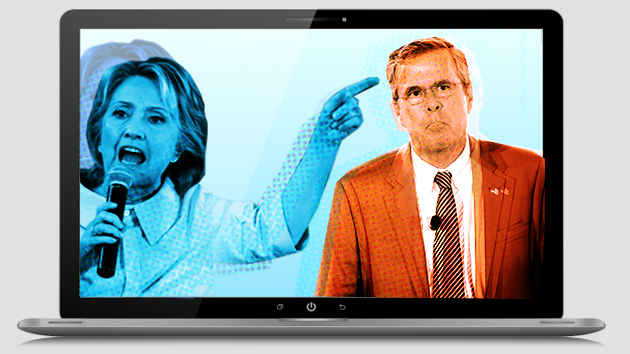 Hillary Clinton’s defenders have regularly and vehemently tossed aside accusations that she mishandled her emails as secretary of state. But a group with close ties to the Clinton campaign has made a curious argument to support her: There’s nothing to see when it comes to Clinton’s emails—but by the way, Jeb Bush did a similar thing with his emails as governor of Florida, and isn’t it awful?

In essence, the argument from pro-Clinton super-PAC Correct the Record boils down like this: Clinton did nothing wrong. She followed the standards of her predecessors as secretary of state by using a personal email account, and once she left office she promptly handed the records from her private server back over to the government. (The group normally glosses over the fact that this handover happened only after the State Department specifically requested these records, more than a year after Clinton stepped down, and that Clinton’s team then decided which emails would be given to the government and promptly deleted everything else.) Meanwhile, Bush also used a personal account as the governor of Florida, and he held onto his own records for years after leaving office, only releasing all of his own self-selected batch to the public once he decided to run for president.

Correct the Record’s president, Brad Woodhouse, has been particularly vocal about using Bush’s email record to rebut attacks against Clinton. In late August, in his capacity as president at the American Democracy Legal Fund, Woodhouse filed a complaint with Florida Attorney General Willie Meggs requesting an investigation into the seven-year delay between when Bush left office and when he fully handed over his emails, pointing to Florida laws that require public officials to hand over records.

When Politico wrote up Woodhouse’s complaint, he immediately blasted out the article to reporters from his Correct the Record email account. “It cannot be disputed that Jeb Bush broke the law in failing to turn over his emails immediately when he left office,” Woodhouse wrote. “Instead, he took seven and a half years to do so. It also seems clear that Bush willfully withheld his emails—only turning over all of what HE declared as work related emails after he decided to run for President. Knowingly and willfully withholding his emails is a criminal act punishable by up to one year in jail.”

A seven-year delay certainly exceeds Clinton’s yearlong gap between quitting her job and turning in her papers. But Bush and Clinton both decided what counted as work and what counted as personal in their emails—a fact that Correct the Record has itself acknowledged at various times. Three weeks ago, Woodhouse passed around a Politifact article describing Bush’s defense of his email handling as “mostly false.” “In reality, he’s done exactly what Clinton has done,” Woodhouse wrote to reporters. “Bush says he has turned over and made public all the emails he was required to. That’s the same argument Clinton is making.”

In an email to Mother Jones, Woodhouse explained that his main objection was that Bush was engaged in hypocrisy when questioning Clinton’s email habits. “Jeb used nearly identical email practices (he maintained a private email server, conducted official business from it, decided what emails he would turn over and which he would keep private) but he criticizes her—it makes him a dissembling, dishonest hypocrite—and the suggestion that she broke laws or rules is rich coming from someone who undoubtedly did.”

Correct the Record is technically an independent super-PAC, free to collect unlimited donations, that started up two years ago as a subsection of David Brock’s opposition research shop American Bridge. But Correct the Record has also devised a novel strategy to break down the typical barrier that’s existed between super-PACs and campaigns, claiming that it’s free to coordinate directly with the Clinton campaign and plan its operations with the campaign’s guidance, since it posts all its material for free online rather than paying for ads.

And with the seal of approval of the Clinton campaign, Correct the Record has torn into Bush in order to fend off allegations against Clinton.

In June, Correct the Record communications director Adrienne Watson sent out a release rounding up how Republican presidential candidates conducted similar email practices to those of Clinton, with Bush topping the list. “Jeb Bush received around 3 million emails as Governor, but he only released 250,000 emails that he hand selected,” the release read. Three days later, Watson sent another release focused on Bush’s emails, this time titled “Republican Presidential Hopefuls Ignore Their Own Email Problems.” Watson accused the GOP candidates of brushing aside sketchy email practices, all while saying there was no wrongdoing when it came to Clinton’s emails. “While Republicans distract from their own shady pasts,” Watson wrote, “Hillary Clinton has been fully transparent and turned over more than 55,000 pages of work-related emails to the State Department, asking for them all to be made public.”

A few weeks later, on July 6, yet another Watson release blasted Bush because “his own record on email transparency fails to measure up,” whereas Clinton took “an unprecedented move for a Secretary of State” by asking for her emails to be released to the public. (The monthly disclosures currently underway were mandated by a federal judge.)

The thread was revived again in August. Correct the Record published a list of five reasons people should ignore stories alleging that Clinton’s email troubles are scandalous. The final item on the list: claims that the media is using a double standard, since “Jeb Bush broke the law with his email use, unlike Hillary.” Correct the Record again pointed to Bush’s seven-year gap. But what, beyond that, made their habits so drastically different—with Clinton emerging squeaky clean and Bush as a crook—was left unsaid.