Photojournalist David Maurice Smith has been on the front lines of the refugee crisis for a year and a half, bearing witness to a great migration of war-weary people seeking safer grounds. He covered the Syrian exodus while in Jordan, where more than 600,000 Syrian refugees are now living. While in Indonesia, he reported on asylum seekers from 14 different countries—including Iraq, Yemen, Burma, Afghanistan, and Pakistan—who were trapped while trying to reach Australia by boat, many of them fleeing war, persecution, or both.

“A lot of those people are there because of the same conflicts that are forcing others to Europe,” Smith says. To see that situation firsthand, Smith recently traveled to, among other places, the Hungarian-Serbian border, where he was awed by the immensity of the crisis. “This is of a huge scale—hundreds of thousands.”

But he was equally struck by how it was the number of refugees, rather than their intimate stories, that dominated the news cycle. “When you see imagery of flash-point events, and people talking about ‘swarms’ of people, it can dehumanize the situation,” he says. “It’s easy to forget that we’re talking about individual people with individual stories and individual lives. It’s personal, and it’s no different than if your son or mother or nephew or daughter was in that situation.”

That’s why Smith says he wanted to capture the quieter moments: “These people are at risk. They’re in delicate situations. We have to humanize them.” 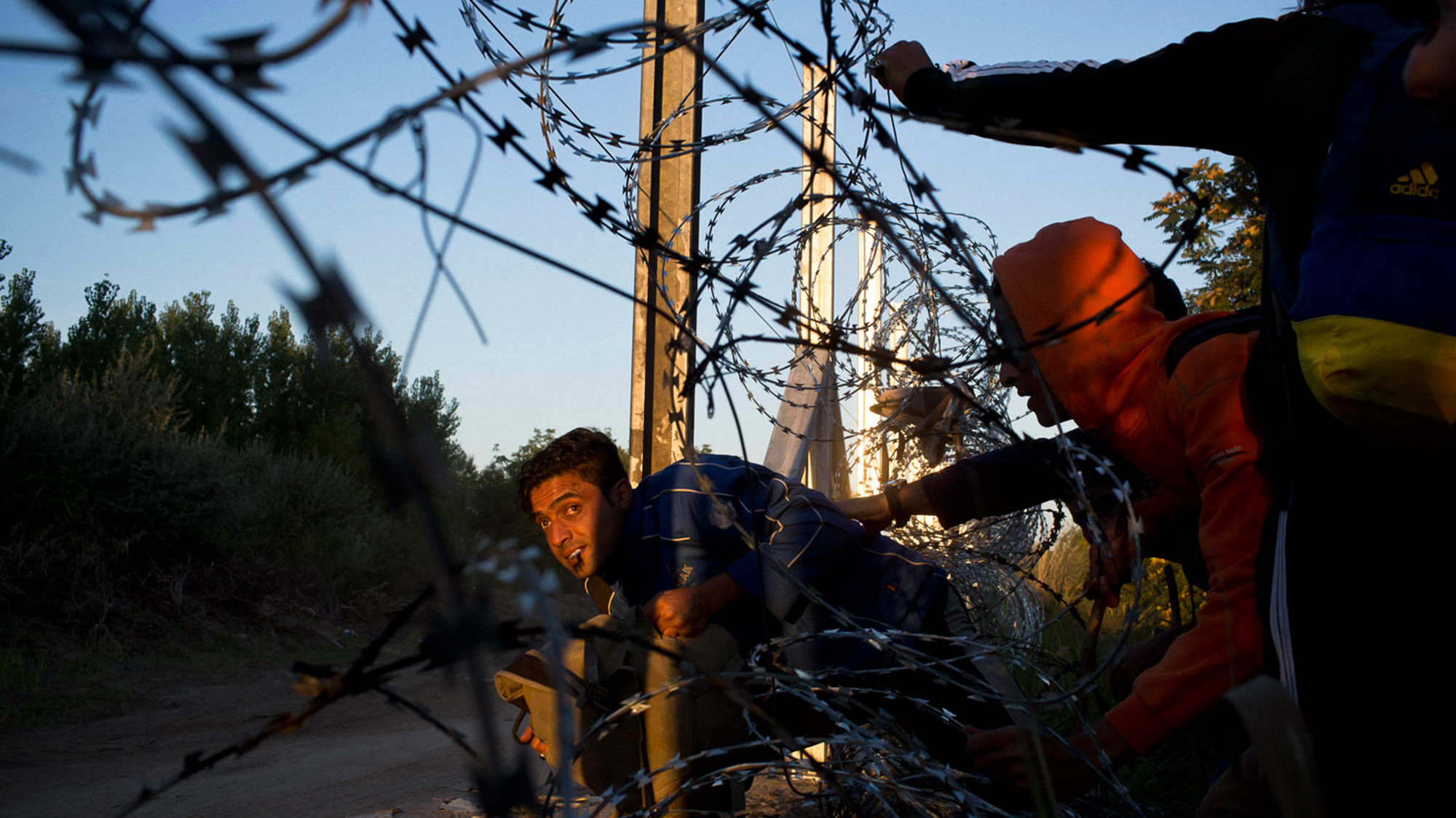 Horgoš, Serbia: Refugees make a break into Hungary through the border fence being constructed between Hungary and Serbia. Most were trying to avoid going to camps in Hungary, fearful that if they are registered and fingerprinted there they will eventually be forced to settle there, as opposed to in a Western European nation. 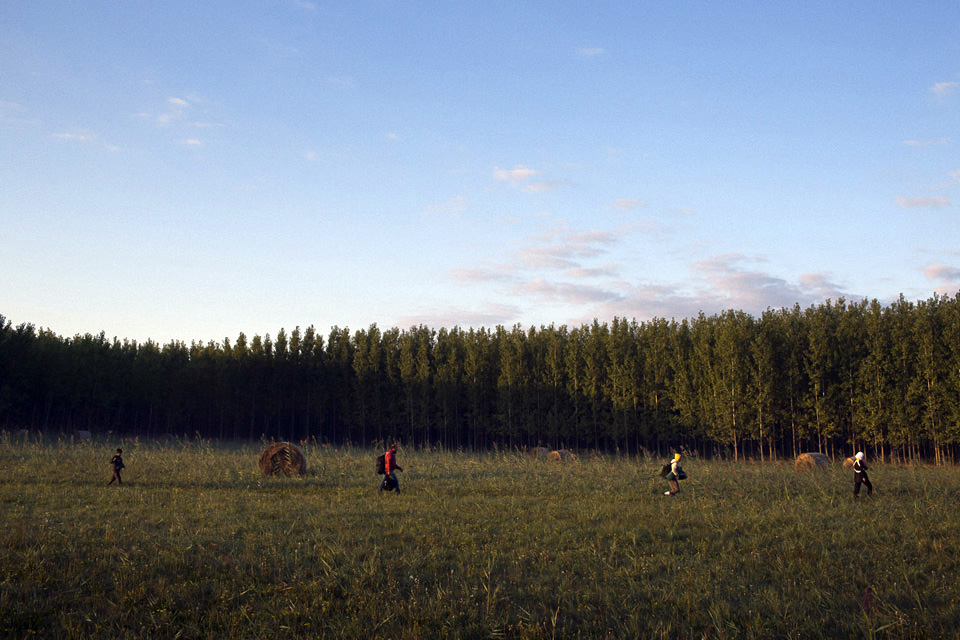 Rözske, Hungary: Syrian refugees walk through farmland and orchards after crossing into Hungary from Serbia. 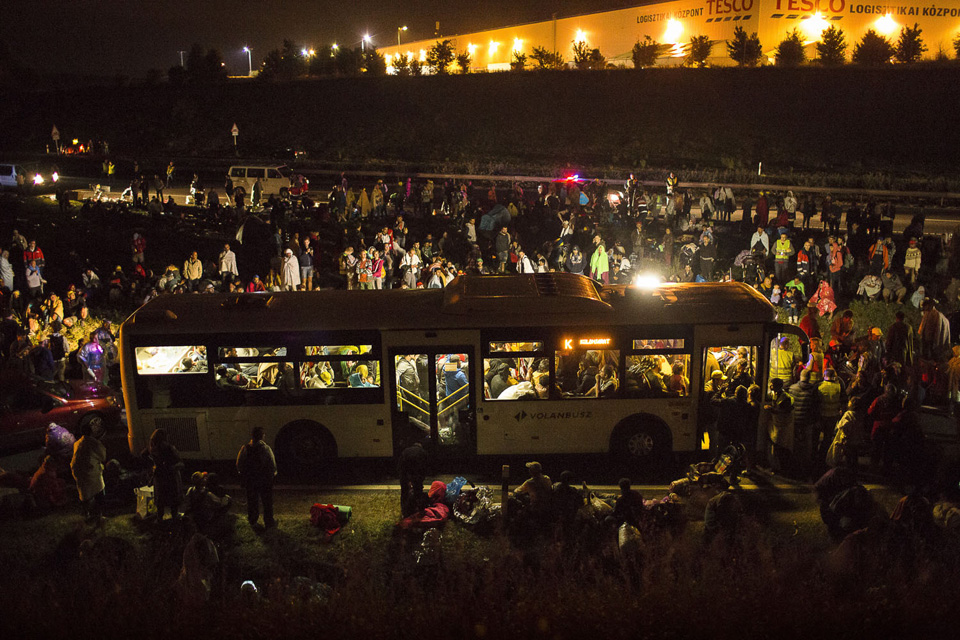 Hungary: One of many buses sent to pick up refugees walking the M1 highway is surrounded by refugees. Many were hesitant to get on board because it wasn’t clear where the buses were heading—and just a day before, a trainload of refugees had been taken to a refugee camp by authorities. The group of refugees were caught at the Keleti train station in Budapest and blocked from getting on board any trains, so they set out to walk to the border with Austria. 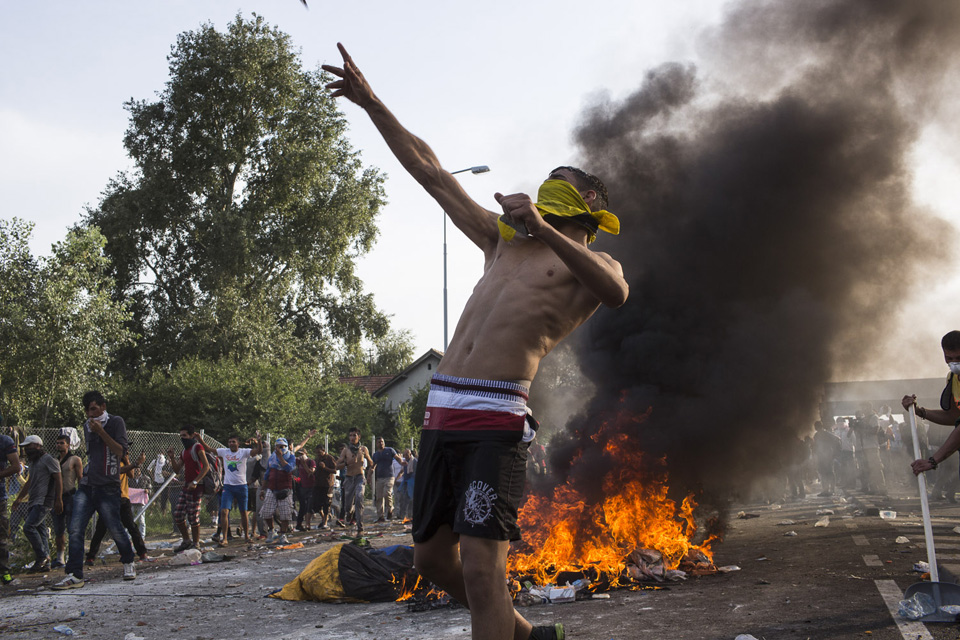 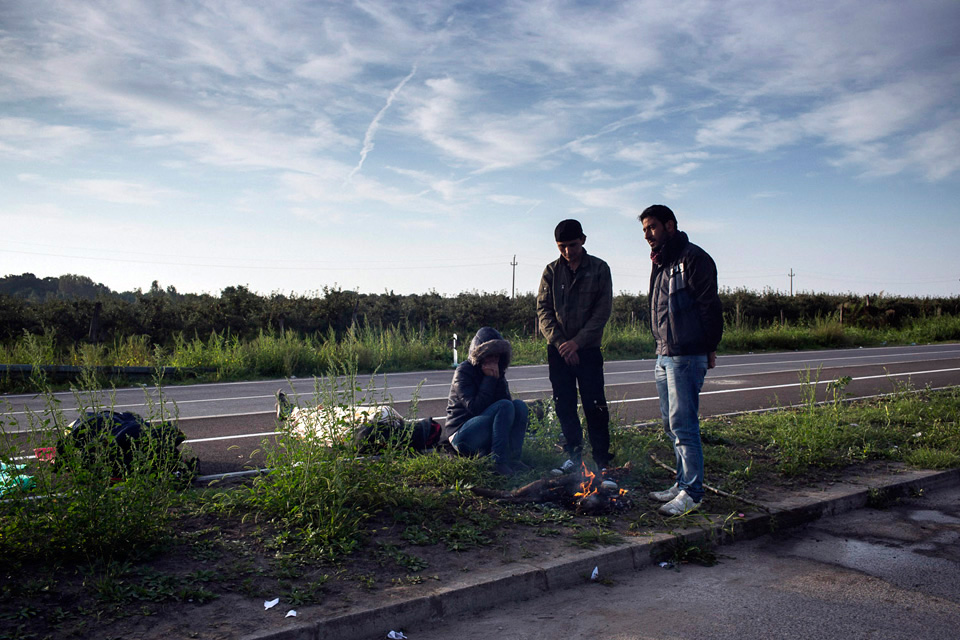 Horgoš, Serbia: Refugees make a break into Hungary through the border fence being constructed between Hungary and Serbia. 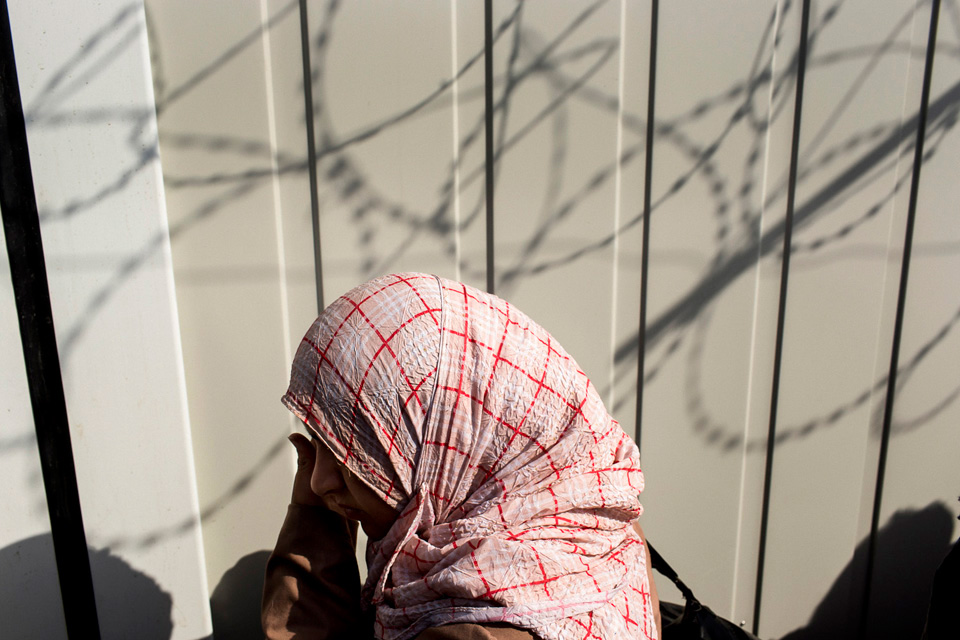 Horgoš, Serbia: Refugees wait in Horgoš on the Serbian side of the border in hopes that the crossing will be opened. The border was sealed on September 14 by Hungarian authorities, who announced that any refugees caught crossing could be punished with up to three years in prison. There are thousands of refugees entering Serbia daily who hope to make it to Western Europe to seek asylum. 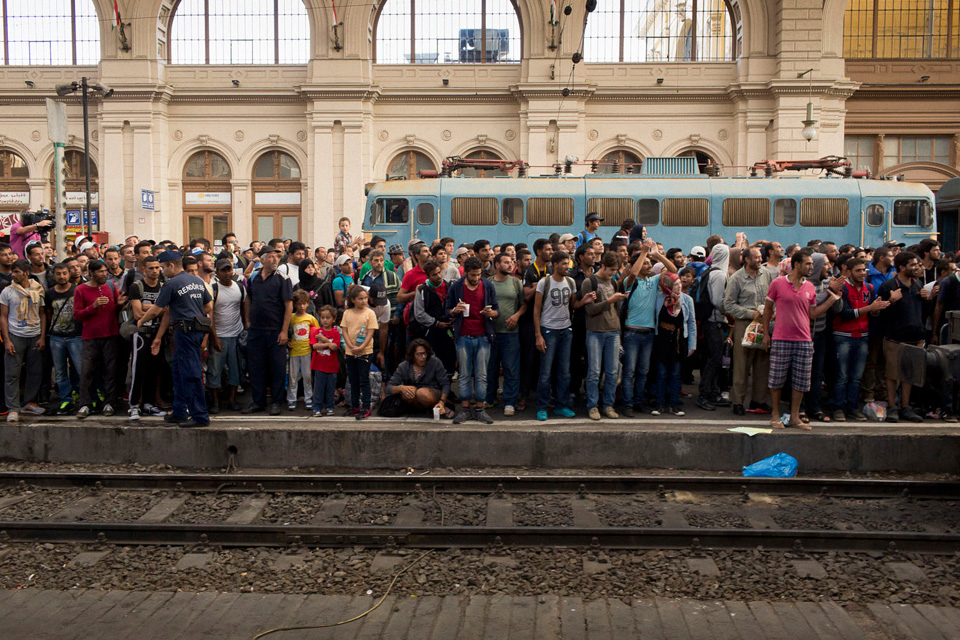 Keleti train station, Budapest: Eager refugees await the arrival of a train into the Keleti station. After being locked out of the station for two days by authorities, the refugees were hopeful that they would be able to board trains for other European countries, mainly Germany. 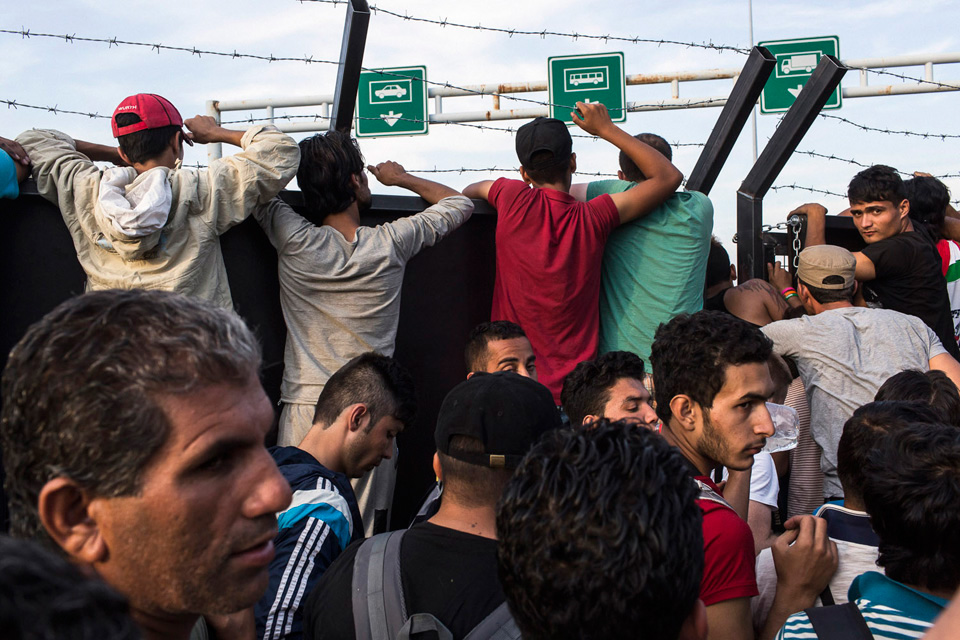 Horgoš, Serbia: Refugees gather on the Serbian side of the border. 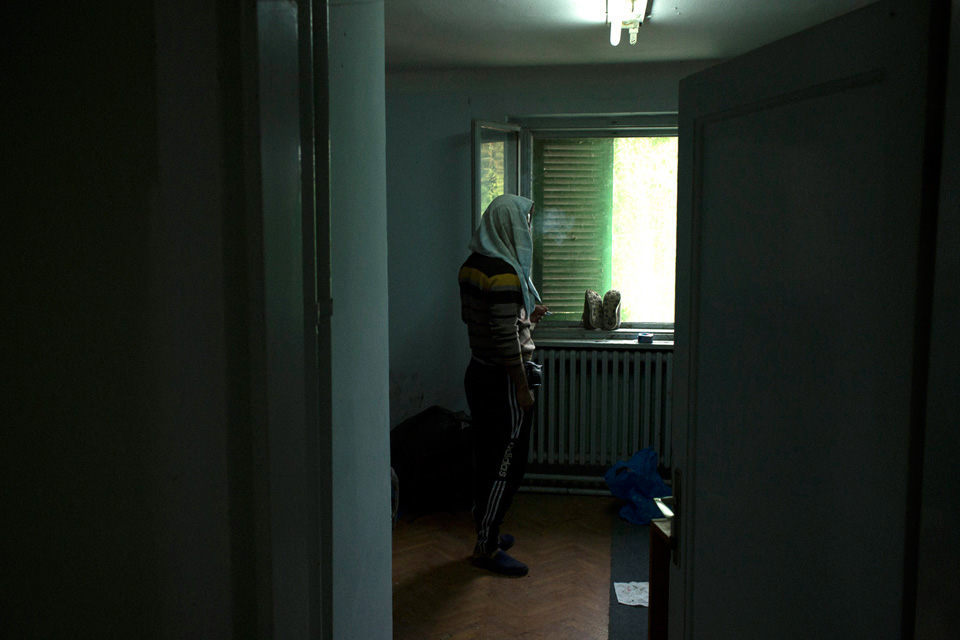 Horgoš, Serbia: A Syrian refugee smokes a cigarette inside an abandoned building on the Serbian side of the border. 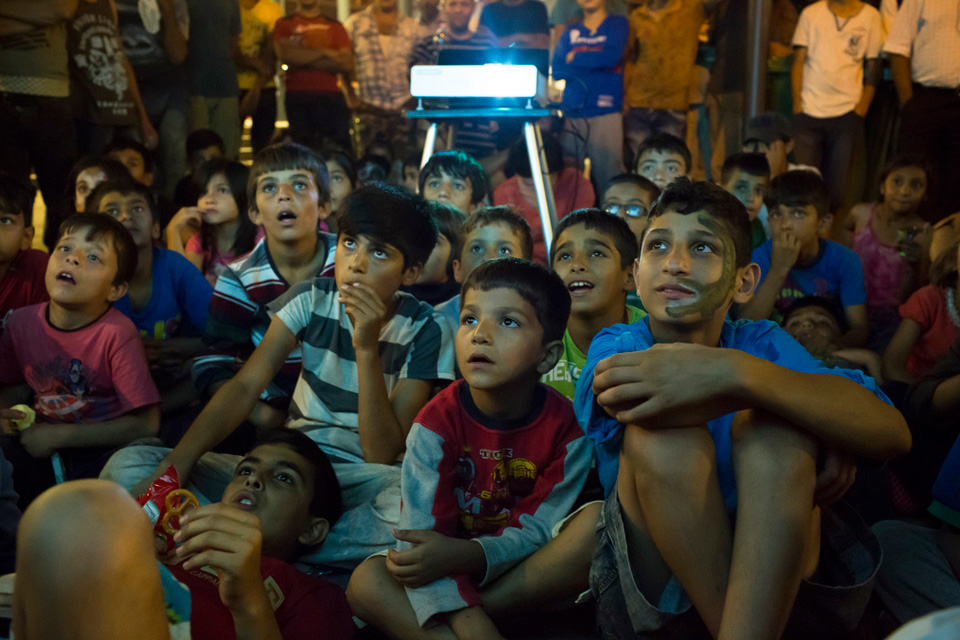 Keleti train station, Budapest: Young refugees gather around a projector set up by local people to watch Tom and Jerry cartoons in the subterranean level of the station. The cartoons are a welcome distraction from an otherwise chaotic scene; thousands are stranded at the station as officials closed travel for refugees, preventing them from moving toward Germany, their ultimate destination. Many spent precious euros to buy tickets, only to be denied entrance to the platforms by the police and barricades. 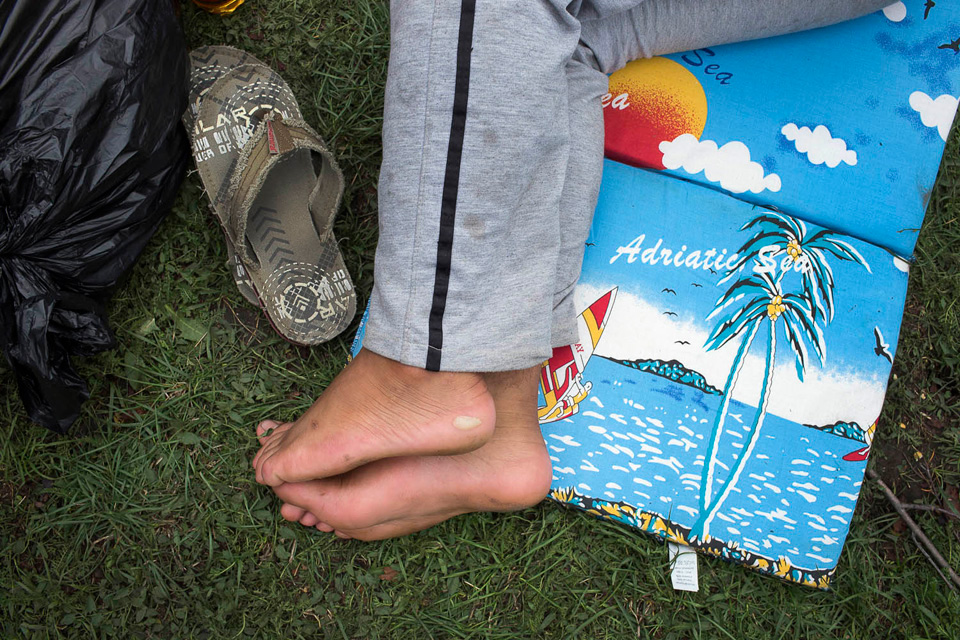 Nickelsdorf, Austria: A refugee with blistered feet rests outside the Nickelsdorf train station near the Hungarian-Austrian border. When the refugees couldn’t board the trains at the Keleti train station in Budapest, they started walking to the border with Austria. 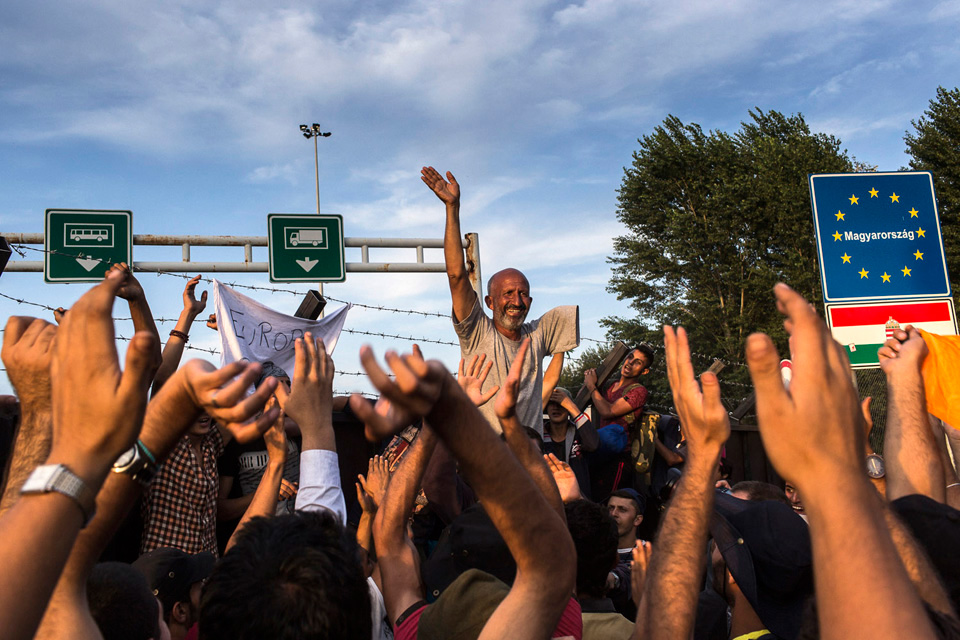 Horgoš, Serbia. Refugees caught in Horgoš yell slogans encouraging the Hungarian authorities to open the border and let them pass. 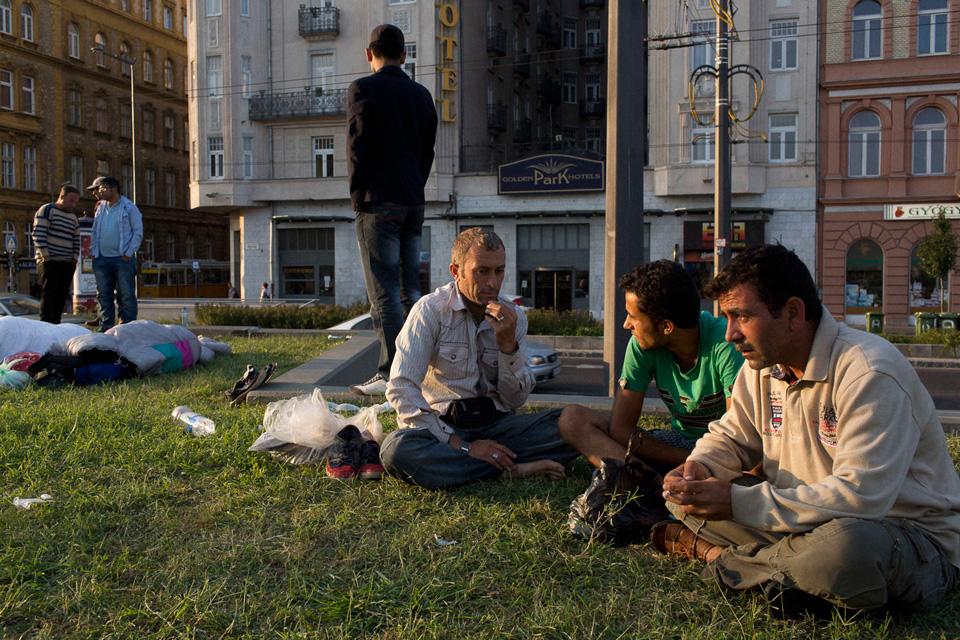 Keleti train station, Budapest: Refugees from Afghanistan sit outside the station in the early morning. They camped out along with thousands of others after being blocked from train travel by authorities. 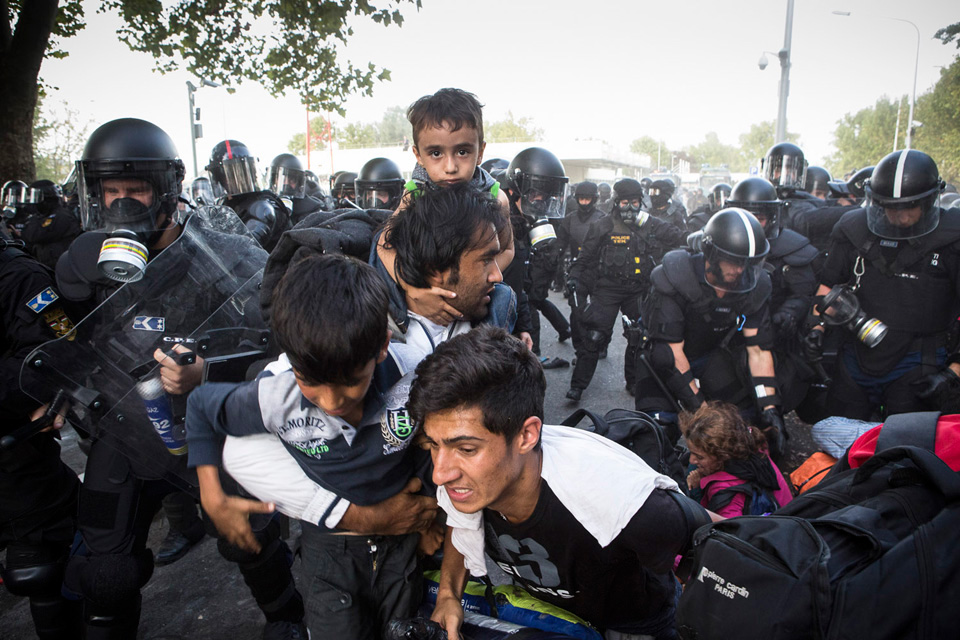 Horgoš, Serbia: A family flees after the Hungarian police responded with force against protesting refugees. 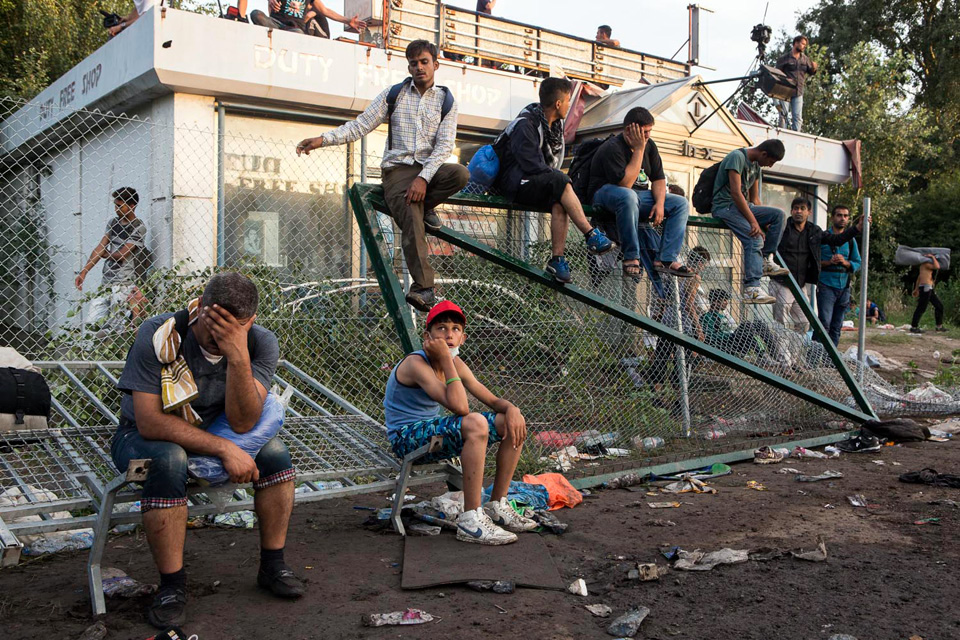 Horgoš, Serbia: Refugees are left stunned after violence broke out with the Hungarian police guarding the border. 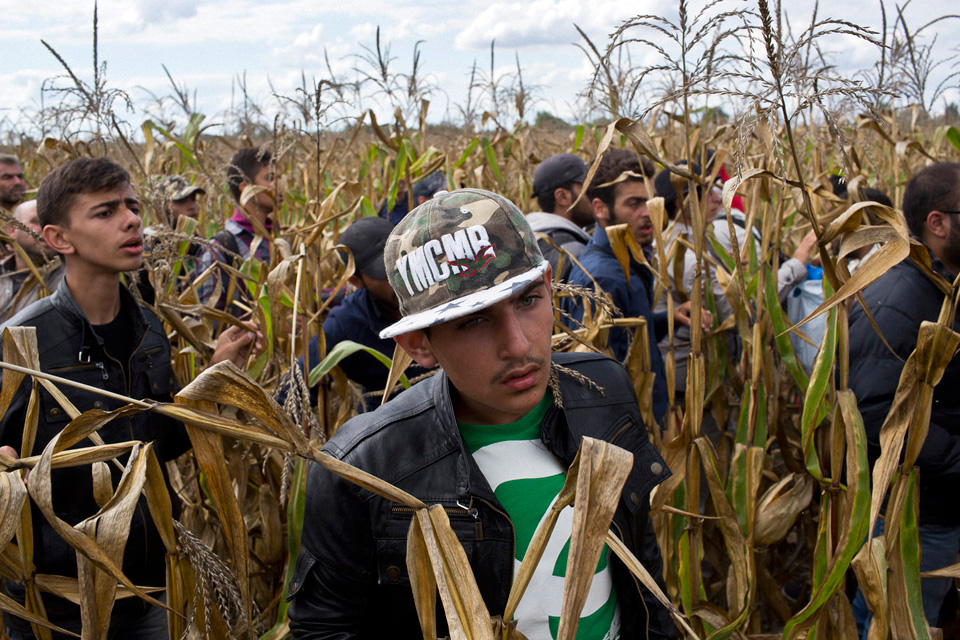 Rözske, Hungary: A group of approximately 200 refugees flee Hungarian authorities after running from a temporary camp near Rözske, on the border with Serbia. 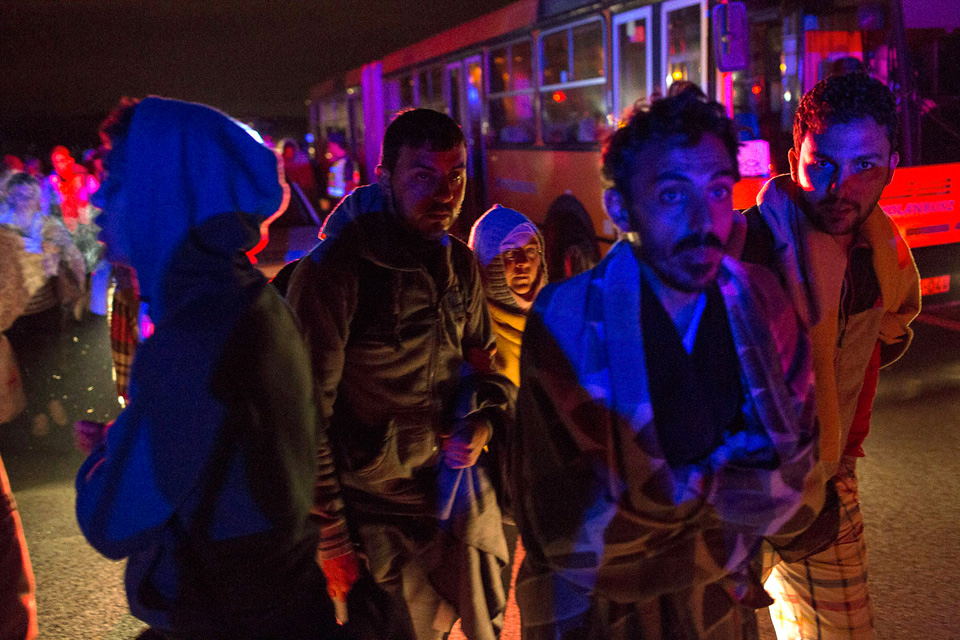 Hungary: Refugees who’d been walking along the M1 highway nervously make their way toward buses sent to pick them up. 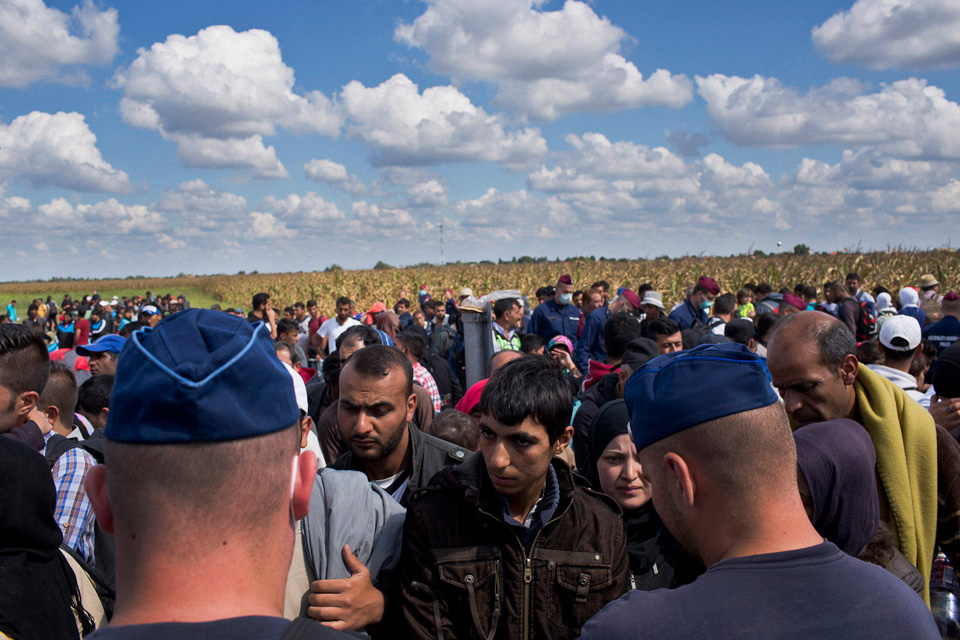 Rözske, Hungary: Refugees wait to board buses to one of the camps set up by Hungarian authorities in Rözske, on the border with Serbia. 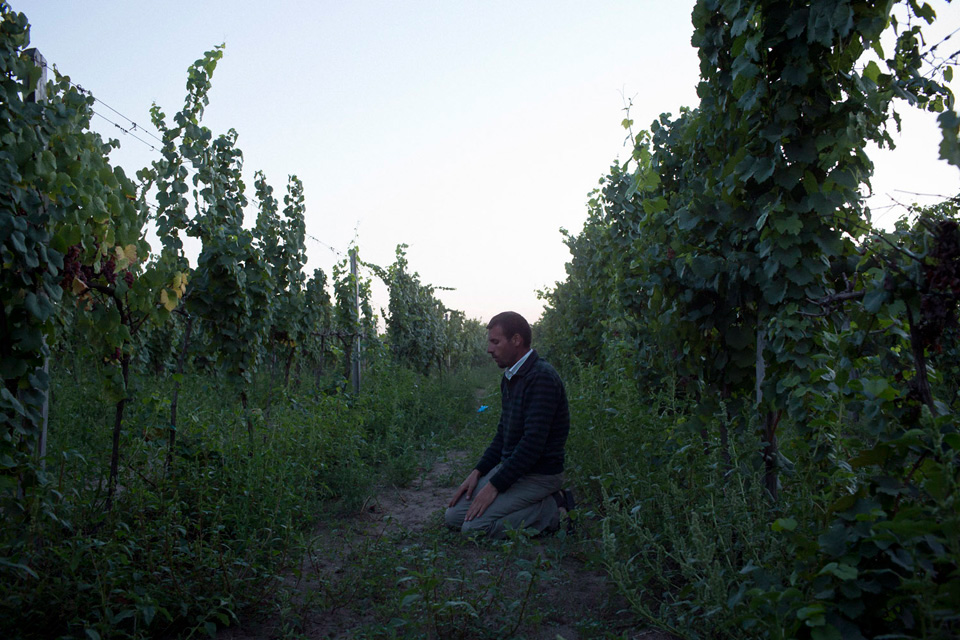 Horgoš, Serbia: A refugee prays in the rows of a vineyard before attempting to run into Hungary through the fence being constructed along the Serbian border. 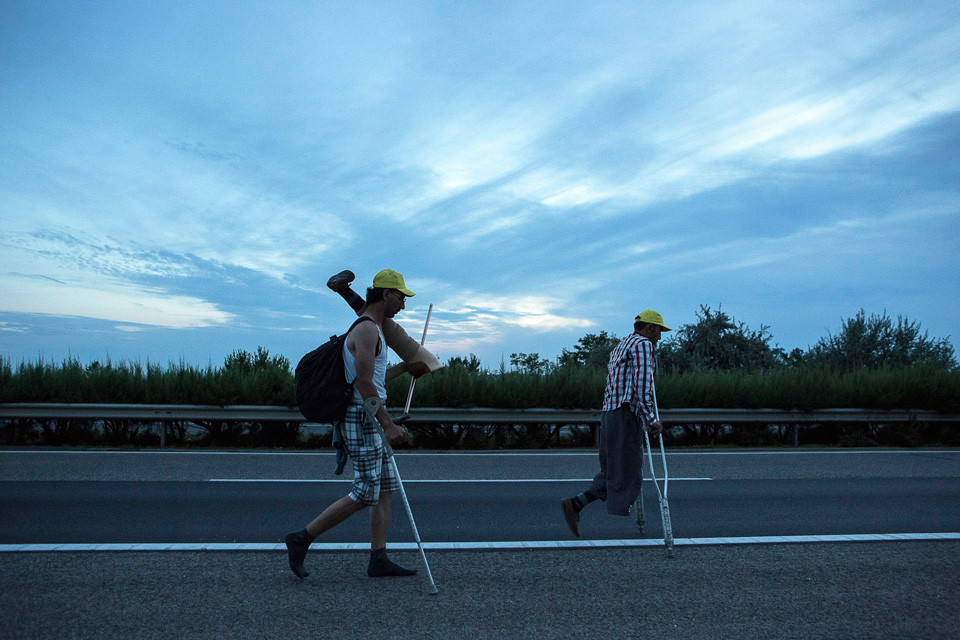 Hungary: A refugee walks with crutches along Hungary’s M1 highway while another man, using a crutch and wearing only socks, carries his prosthetic leg. The man in socks had previously lent his shoes to the amputee: one on his foot and one on the prosthetic. 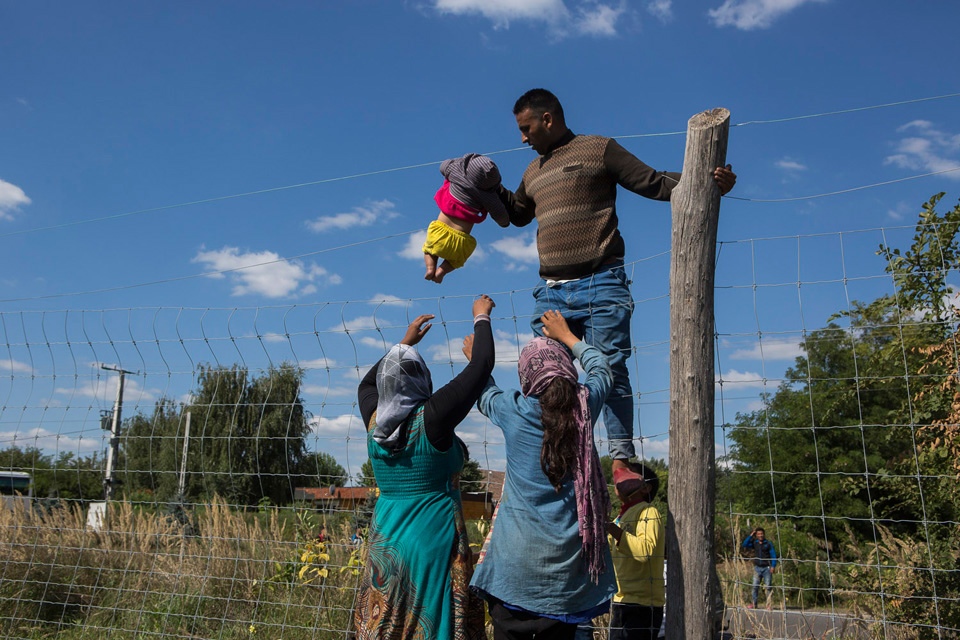 A man lifts an infant over a fence running along the M5 motorway after a group of approximately 200 refugees, largely Syrians, marched out of temporary camps stationed at the border of Hungary and Serbia. They were met by riot police with dogs.