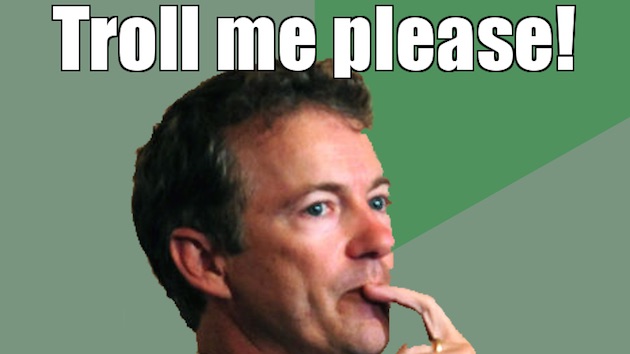 And I'll track your phone!RandPaul.com

Rand Paul’s campaign established itself as the cool internet campaign early when it hired Austin-based GOP digital hipster Vincent Harris to run a small social media empire heavy on memes. But the campaign’s latest effort to appeal to the youth seems mostly like an invitation to troll the struggling candidate—except that it’s also kind of creepy.

Paul took to Twitter this afternoon to announce the launch of his new official campaign app—available for free in Apple and Android stores—which promises the latest “insider” Rand Paul news and event listings, as well as “fun” features like a tool to take fake “selfies” with Paul and a hidden Space Invaders-style game in which Paul’s logo shoots at the logos of other candidates. (Sound fun?)

And, of course, it’s easy to mess with.

Not all the “selfies” aimed so low (though others aimed much lower).

Alex Hart, the digital content director for liberal advocacy group People for the American Way, saw an opportunity to get Paul to endorse her group’s message:

And conservative Iowa activist Craig Robinson gleefully toyed with his new ability to place Paul wherever he wanted (including in jail and alongside Paul’s former top aide and nephew Jesse Benton, who was indicted last month on federal campaign finance charges):

I know @RandPaul has been campaigning in the West, but jeez #badappidea pic.twitter.com/jpEWWgjSPM

As the New York Times pointed out, other campaigns have had apps before, but they are usually criticized for just pandering to the already converted. That’s why having fun angles are worth it, even if they have the potential to backfire. They reel in new contacts for the campaign.

And that’s what is really going on here. The app is designed to suck supporters (and their personal information) into the campaign’s databases. Merely by installing the app, users are letting the campaign into their phones to collect the kind of information that people are often reluctant to give up, but which is so vital to building a national network of supporters and small-dollar donors.

For example, according to the permissions disclaimer in the Android store, installing the app gives the campaign permission to locate you via GPS and check your phone to see what social media accounts you have. A spokesman for the campaign did not return requests for comment on how the campaign will use that data. One clue: The app was developed by CanDo Politics, a conservative political fundraising group that has often worked for Paul in the past.