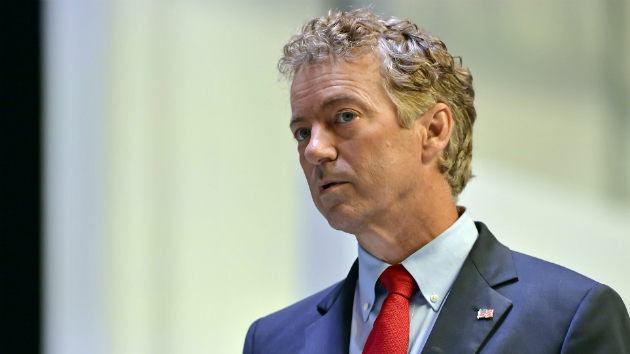 On Monday, Rand Paul pledged his campaign would outlast “this clown” Donald Trump, and swore he was having no trouble fundraising. Today, he got some bad news. The head of Purple PAC, one of three super-PACs devoted to supporting his candidacy, told Politico that he was holding off on spending any more money for Paul’s election until the Kentucky senator’s campaign “corrects its problems.”

Purple PAC was established by former Cato Institute head Ed Crane two years ago to generally support libertarian candidates. But after raising $1.2 million in the first half of this year, Crane announced the super-PAC was all in for Paul. The super-PAC’s website changed its motif and still features a heavily pro-Paul message. But on Tuesday, Crane told Politico that as long as the campaign continues to languish in the polls without a more resonant message, he’s not going to spend or raise any money on Paul’s behalf.

The libertarian views that catapulted Paul to national prominence had “disappeared,” Crane said, leaving many of Paul’s longtime backers miffed.

“I want to grab Rand by the lapels and say, ‘What are you doing?'” Crane said. “I’m a big fan of Rand Paul. But whatever motivates his campaign, I don’t get it.”

In an email to Mother Jones, Crane said, “I still support Rand. We’ve stopped raising money until Rand starts emphasizing his libertarian positions, e.g., NSA, a more rational approach to Middle East, which we expect him to do.”

Earlier this year, one Purple PAC contributor told Mother Jones that donors trusted Crane to make calls about supporting candidates, and it’s not clear how much of the decision to cease fundraising for Paul is driven by the donors. Crane’s outfit has relied heavily on one particular donor—Jeffrey Yass, the founder of investment firm Susquehenna International Group—who has also donated generously to the other pro-Paul super-PACs and is the largest single donor backing Paul’s candidacy. If Yass has soured on Paul, that raises questions about the candidate’s ability to continue in the race.

Yass, who did not respond to a request for comment, donated $1 million of the nearly $1.2 million raised by Purple PAC this year. He also donated $1 million to America’s Liberty PAC, a super-PAC specifically endorsed by Paul. His contribution forms one-third of that PAC’s total fundraising haul. A third pro-Paul PAC, Concerned American Voters, has raised $1.8 million, of which Yass has kicked in $250,000. Combined, Yass has given more than $2.2 million, or roughly one-third of the total raised by pro-Paul super PACs.

A Paul aide brushed off the news that Purple PAC was suspending its support for the Kentucky senator: “This PAC, as far as I can tell, has spent no money—zero—in support of Rand. For this and other reasons, this won’t impact Rand at all.”

The only activity the PAC seems to have taken so far is promoting a contest offering $10,000 in prizes for the five best ideas on how to promote Paul. No winner has been announced.

America’s Liberty PAC, the other major recipient of Yass’ largesse, was run by two political operatives with close ties to the Paul family’s political operation, Paul’s nephew-in-law Jesse Benton and John Tate, both of whom have been indicted on campaign finance charges stemming from their involvement with the Ron Paul campaign in the 2012 presidential race. The trial for Benton, Tate, and a third man is scheduled to begin on Monday.