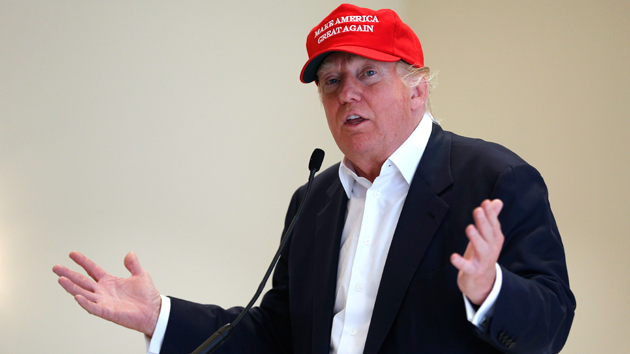 Donald Trump, the celebrity tycoon and front-runner in the Republican 2016 race, doesn’t hold back when he criticizes the Bush-Cheney crowd for the Iraq War. Over the years, he has called the Iraq invasion a “big mistake” and a “mess,” and he has insisted he never would have launched that war. Though the war remains unpopular, Trump’s critique does put him at odds with the Republican establishment and GOP voters who supported the invasion. So as he has soared to the top of the polls, Trump has deftly devised a way of discussing the Iraq War that includes Obama-bashing. The problem (well, it would be a problem for a conventional politician): Trump is contradicted by his own words.

Here’s how Trump covers his bases on Iraq. While he bashes President George W. Bush for initiating the war, he also slams President Barack Obama for withdrawing troops from Iraq. Weeks ago, when Trump appeared on Megyn Kelly’s Fox News show (pre-feud), he noted he was “strongly against” the invasion of Iraq. “We decapitated Iraq and now Iran is taking over the entire Middle East,” he said. Then Kelly, bringing up a key Republican talking point, asked Trump if Obama had snatched defeat from the jaws of victory by bringing home US troops from Iraq. Trump replied:

You can watch him say that here:

This has been Trump’s line: Blame Bush and Obama. On another Fox appearance, he said, “We shouldn’t have been there, and once we were there, we probably should have stayed. The Middle East has been totally decapitated. It’s a mess. The balance has been lost between Iraq and Iran.” He has repeatedly asserted that Obama should have kept US troops in Iraq.

Like other Republicans, including Jeb Bush, Trump is wrong to hold Obama responsible for the US troop withdrawals in Iraq; George W. Bush, weeks before leaving the White House, signed an agreement with the Iraqi government to pull out US military personnel. But Trump has a double fault of his own in this regard: During the Bush years, he called for the immediate removal of US troops from Iraq.

During a 2007 interview on CNN with Wolf Blitzer, Trump pounded Bush for the war:

The war is a total disaster, it’s a catastrophe, nothing less. It is such a shame that this took place. In fact, I gained a lot of respect for our current president’s father by the fact he had the sense to not to go into Iraq. He won the war and then said let’s not go the rest of the way, and he turned out to be right. And Saddam Hussein, whether they like him or didn’t like him, he hated terrorists. He’d shot and killed terrorists. When terrorists came into his country, which he did control, which he did dominate, he would kill terrorists. Now it’s a breeding ground for terrorists. Look, the war is a total catastrophe. And they have a civil war going on over there. Well, there’s only one person you can blame, and that’s our current president…[Cheney] is obviously a very hawkish guy on the war. He said the war was going fantastically just a few months ago. It’s just very sad. I don’t know if they’re bad people. I don’t know what’s going. I just know that they got us into a mess the likes of which this country has probably never seen. It’s one of the great catastrophes of all time. And perhaps even worse: The rest of the world hates us.

Blitzer then asked Trump, “How does the United States get out of this situation?” Trump replied:

How do they get out? You know how they get out? They get out. That’s how they get out. Declare victory and leave. Because, I’ll tell you, this country is just going to get further bogged down. They’re in a civil war over there, Wolf. There’s nothing that we’re going to be able to do with a civil war. They are in a major civil war. And it’s going to go to Iran, and it’s going to go to other countries. They are in the midst of a major civil war. By the way, we’re keeping the lid on a little bit. But the day we leave anyway it’s all going to blow up. And Saddam Hussein will be a nice person compared to the man…that takes over… This is a total catastrophe, and you might as well get out now because you’re just wasting time and lives. You know, nobody talks about the soldiers who are coming back with no arms and no legs. And I saw at Mar-a-Largo on Monday. I make Mar-a-Largo, my club [in Palm Beach, Florida] that you know about… On a Monday, I let returning Iraq injured soldiers come to the premises. The most beautiful people I’ve ever seen, but they’re missing arms and legs. They’re with their wives. Sometimes they’re with their girlfriends. And the tears are coming down the faces of these people. I mean, the thousands, maybe  hundreds of thousands—and the Iraqis that have just maimed and killed. This war is a horrible thing. Now President Bush says he is religious. And yet 400,000 people, the way I count it, have died, and probably millions have been badly maimed and injured. What’s going on? What’s going on?

Trump was unequivocal: The United States should cut its losses and leave Iraq. Yet now Trump excoriates Obama for more or less following that advice (per the agreement Bush signed with the Iraqi government). This is not so much a flip-flop for the former reality TV star as a convenient change in programming.

You can watch Trump call for removing the troops here:

In that interview with Blitzer, Trump was on fire. He slammed Bush for being a liar on issues great and small:

Everything in Washington has been a lie. Weapons of mass destruction—it was a total lie. It was a way of attacking Iraq, which he thought was going to be easy and it turned out to be the exact opposite of easy. [Bush says he] reads 60 books a year; he reads a book a week. Do you think the president reads a book a week? I don’t think so. [He says] he doesn’t watch television. Now one thing I know is that when I’m on television, I watch. Or I try. Because you do. Your own ego says let’s watch, let’s see. Whether it’s good or bad, you wanna watch. He doesn’t watch television. So he’s on television being interviewed by you or someone else and he doesn’t watch. Does anyone really believe that? Now they’re doing this whole scandal with the US attorneys. Now they’re finding emails. And it’s proven to be a lie. Everything is a lie. It’s all a big lie.

The Trump campaign did not respond to a request for comment on his change in position regarding US troops in Iraq.