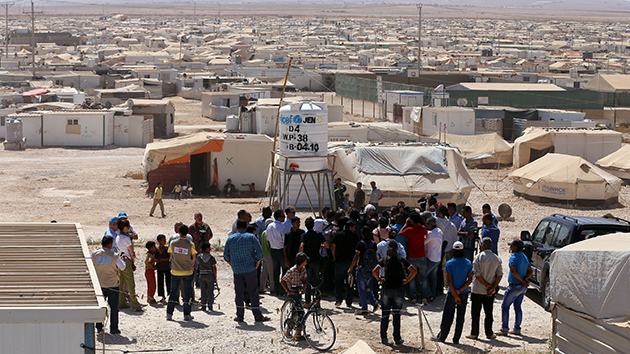 On Monday, the chief of the United Nation’s World Food Programme, the largest global provider of emergency food to the poor, announced that the program urgently needs $278 million over the next three months to feed millions of Syrian refugees. Even some of the neediest families, executive director Ertharin Cousin warned, will be cut off if the international community doesn’t pony up.

The plea for donations comes amid mounting debate across Europe about how to absorb a massive influx of refugees from war-torn Syria, and how to provide for the millions of displaced Syrians stuck in refugee camps across the region in what has been described as the worst European refugee crisis since World War II.

“I expect the situation to get more desperate and dire,” said WFP chief Ertharin Cousin.

The WFP’s Syrian response, the biggest and most complex of its worldwide campaigns, has been crippled by the funding shortfall. The WFP expects to reach more than 4 million people within Syria by the end of this month; it also serves 1.6 million refugees in camps in neighboring countries. Most refugees fleeing Syria’s civil war have found temporary shelter in Jordan, Lebanon, Turkey, Iraq, and Egypt, but as the camps grow more crowded and resources more scant, refugees have left in search of better conditions, sparking a crisis across Europe as nations debate how, or even whether, to shelter them. “The needs are outpacing the contributions,” Cousin told reporters at a New York City roundtable in advance of this week’s meeting of the UN General Assembly.

The funding gap remains even after sharp cutbacks at the start of September; the program slashed approximately 360,000 refugees from its Syria response, including 229,000 refugees in Jordan and more than 131,000 refugees in Lebanon, and put the remaining refugees in those countries on half rations. With those reductions, most refugees in the region are living on about 50 cents a day: Without additional funds, “we risk losing even more people,” Cousin said. “We continue to slice and dice the targeting to continue to support as many people as possible for as long as possible.”

Even if those cuts are made permanent, the WFP expects a $109 million shortfall in the program, which costs about $26 million a week to operate. October is set, but WFP officials say they will need to make further cuts come November and December if the donors don’t materialize. “I expect the situation to get more desperate and dire,” Cousin said. “If we have to cut that in half again, you’re then getting to the place where you’re providing less resources than a family needs to replace staples.”

“We’re seeing girls being married off earlier when the families can no longer feed them.”

Families operating on half rations can no longer buy fruits and vegetables, Cousin said. Instead, they rely on flour, potato broth, and two small meals a day. Stricken families have begun “taking children out of schools so they can work, so that they can try to earn more,” Cousin said. And “we’re seeing girls being married off earlier when the families can no longer feed them.”

The United States is the biggest funder of the food program, which relies mainly on contributions from partner countries—the private sector contributes 5 to 10 percent. The WFP received $2.2 billion from the federal government last year, a mixture of cash and commodities. Cousin wouldn’t comment when asked what impact a change of administration might have on that funding arrangement, only noting that the program’s relationship with American officials “has never been stronger.”

Meanwhile, also on Monday, McDonald’s announced it has partnered with corporate giants including Google, Facebook, Twitter, Cargill, McCain Foods, and MasterCard, to support the WFP’s response to the migrant crisis—not via a direct contribution, but via advertising campaigns across 38 countries: