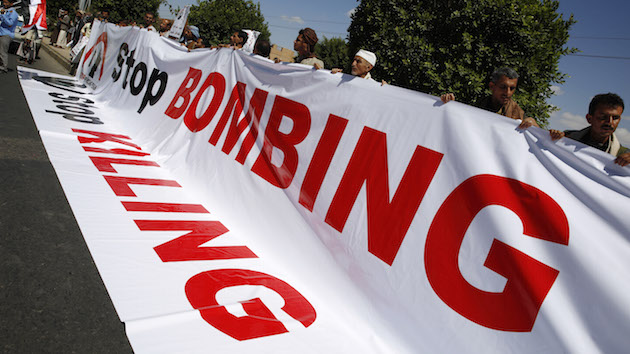 For the second time in three weeks, a hospital belonging to the international medical aid group Doctors Without Borders has been bombed by warplanes.

The latest attack occurred on Monday night in Yemen, where aircraft from a coalition led by Saudi Arabia attacked a hospital belonging to the aid group, which is also known as Médecins Sans Frontières. While the group said patients and staff were in the hospital at the time of the attack, they did not report any deaths. The Saudi-led coalition has been bombing Yemen for seven months in a campaign against the Houthis, a Shiite rebel group that currently holds power in the country. But Doctors Without Borders says the Saudis were aware of the hospital’s location. “We provided [the coalition] with all of our GPS coordinates about two weeks ago,” Hassan Boucenine, Doctors Without Borders’ Yemen director, said to Reuters.

First photos for our health facility in Haydan #Saada after the airstrikes that took place last night. #Yemen pic.twitter.com/P2mr7sgp63

That mirrors the attack that took place three weeks ago, when an American AC-130 gunship destroyed a Doctors Without Borders hospital in Kunduz, Afghanistan, killing at least 30 people. The group said the US military had been given the coordinates of the hospital and should have known its location. American officials at first said they didn’t know they had fired on a medical facility. “The hospital was mistakenly struck. We would never intentionally target a protected medical facility,” said Gen. John Campbell, the US military commander in Afghanistan. But more recent reports claim American special operations soldiers knew the building was a hospital but believed the Taliban were using it as a base. The decision to attack the hospital anyway may mean the strike was a war crime under international law.

Boucenine did not shy away from using that language to describe the Saudi strike last night. “It could be a mistake, but the fact of the matter is it’s a war crime,” he told Reuters. “There’s no reason to target a hospital.”

The strike is only a small part of destruction caused by the Saudi-led air campaign, which the United Nations says is responsible for most of the approximately 2,000 civilian deaths in Yemen that have occurred since strikes began in March. The bombings have also leveled historic parts of Sanaa, the Yemeni capital, which had survived years of civil war and rebellion since the Arab Spring revolts hit Yemen in 2011.