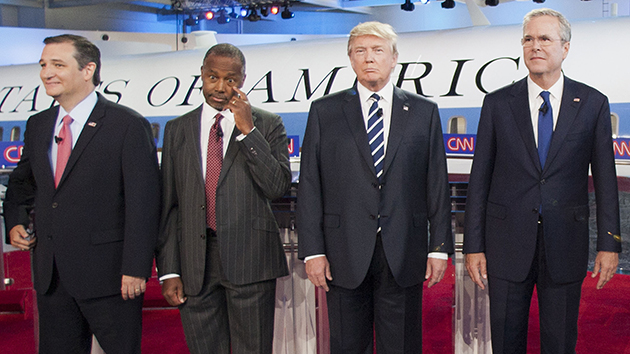 Which one of these GOP candidates acknowledged having smoked weed?Armando Arorizo/ZUMA

When GOP presidential candidates appear at the University of Colorado-Boulder for their third debate, they will focus on jobs and the economy. Given this theme and the debate’s location in the first state to legalize marijuana, it’s likely that the state’s recreational marijuana industry will be discussed.

The evolution of Colorado’s pot economy has faced some challenges, such as problems with setting up bank accounts for profits made on a substance that the federal government still considers illegal, and marijuana-related crimes. But legalized marijuana also has pumped tens of millions of dollars into state and local coffers, created thousands of jobs, and could represent a $1 billion retail market in the future.

But the Colorado model—and similar ones in Washington, Alaska, and Oregon—isn’t exactly popular among the political right. Presidential hopefuls have had to walk the line between their commitment to states’ rights and a GOP base that’s generally anti-drugs and pro-enforcement of federal drug laws.

Marijuana legalization is a tricky subject: Nearly half of Americans have tried marijuana, and a growing percentage supports legalization, according to the Pew Research Center. But not all demographic groups support it equally. Hispanics, for example, support legalization at lower rates than whites and blacks. And public consumption is still opposed by a majority of those surveyed. Jeb Bush, Ted Cruz, and Rand Paul have admitted to trying pot—Marco Rubio has been impossible to pin down—but they all oppose federal legalization.

Here is a rundown of the candidates’ public statements on legal weed. (Some were collected by an advocacy group, the Marijuana Policy Project, which supports legalization of marijuana.)

Donald Trump: The GOP front-runner’s position has changed over the years. In 1990, he was quoted in the Sarasota Herald-Tribune as saying that US drug enforcement efforts were “a joke” and that drugs should be legalized to “take the profit away from these drug czars.” Fast-forward 25 years and now Trump is opposed to legalization. “I say it’s bad,” he told the crowd at the Conservative Political Action Conference in June, in response to a question about Colorado’s legal weed. “Medical marijuana is another thing, but I think [recreational marijuana] it’s bad. And I feel strongly about that.” But what about states’ rights? “If they vote for it, they vote for it. But they’ve got a lot of problems going on right now, in Colorado. Some big problems. But I think medical marijuana, 100 percent.”

Dr. Ben Carson: Carson has said he’s a fan of the war on drugs, and he told the Blaze he would “intensify it.” He also supports medical marijuana “in compassionate cases.” At a June campaign event in Colorado, he noted that “regular exposure to marijuana in the developing brain has been proven to result in a decreased IQ. The last thing we need is a bunch of people running around with decreased IQ.” Therefore, he says, he’d enforce federal drug laws in which the use of marijuana is considered a crime.

Sen. Marco Rubio: Rubio does not oppose the use of medical marijuana, provided the substance has been through an FDA vetting process, but he opposes legalization in all other cases. When radio host Hugh Hewitt  asked him about enforcing federal drug laws, Rubio said yes. But he left open the states’ rights question.

“I think we need to enforce our federal laws,” he said. “Now, do states have a right to do what they want?” He then got a little confusing. “They don’t agree with it, but they have their rights. But they don’t have a right to write federal policy as well.” He then asserted that he doesn’t “believe we should be in the business of legalizing additional intoxicants in this country for the primary reason that when you legalize something, what you’re sending a message to young people is it can’t be that bad, because if it was that bad, it wouldn’t be legal.”

This interview was in April. In February, Alex Conant, his campaign spokesman, told Politico that Rubio believes that legalized recreational marijuana “is a bad idea, and that the states that are doing it may well come to regret it. Of course, states can make decisions about what laws they wish to apply within their own borders.”

Paul helped spur one of the more memorable moments in the last GOP debate when, refusing to name names, he implied that one of the candidates was a hypocrite for having smoked marijuana as a teenager but then opposing it as a governor. “There’s at least one prominent example on the stage of someone who says they smoked pot in high school,” Paul said. “And yet, the people who are going to jail for this are poor people, often African Americans and often Hispanics, and yet the rich kids who use drugs aren’t.”

Gov. Jeb Bush: The former Florida governor acknowledged that Paul was talking about him and that yes, as a teen, he’d smoked pot. “I’m sure other people did it and didn’t want to admit it in front of 25 million people,” Bush said. “My mom’s certainly not happy that I just did.”

But Bush “has a long history of supporting the war on drugs and opposing the legalization of marijuana for any purpose,” according to the Marijuana Policy Project. Still, he told C-Span in February that even though he disagreed with legalization, he did believe that states should have the right to determine policy.

Gov. Chris Christie: Christie was outspoken in his opposition to legal recreational marijuana during the last debate. After Paul was asked about legalizing marijuana, Paul said smoking marijuana only harmed the person doing it. But Christie pounced, saying that smoking marijuana is not a victimless crime, and underscoring its supposed devastating effect on families. “Look at the decrease in productivity, look at the way people get used and move on to other drugs when they use marijuana as a gateway drug,” he said. “It is not them that are the only victims—the families are the victims too, children are the victims too, and their employers are the victims also.” Christie has said that, as president, he’d enforce federal laws when it comes to marijuana. “If you’re getting high in Colorado today, enjoy it,” he told a New Hampshire town hall crowd in July. “As of January 2017, I will enforce the federal laws.”

Carly Fiorina: The former Hewlett-Packard CEO has come out against marijuana legalization under all circumstances, but she also supports states’ rights. “I don’t support legalized marijuana for a whole host of reasons, including the fact that this is a very complex chemical substance, and when we tell young people it is just like drinking a beer, we are not telling them the truth,” she told the Hill in June. “But I think Colorado voters made a choice, I don’t support their choice, but I do support their right to make that choice.”

Sen. Ted Cruz: Cruz has consistently opposed recreational marijuana but nonetheless believes that legalization is up to the states. “When it comes to a question of legalizing marijuana, I don’t support legalizing marijuana,” he told Hugh Hewitt in April. “If it were on the ballot in the state of Texas, I would vote no. But I also believe that’s a legitimate question for the states to make a determination…I think it is appropriate for the federal government to recognize that the citizens of those states have made that decision, and one of the benefits of it, you know, using Brandeis’ terms of laboratories of democracy, is we can now watch and see what happens in Colorado and Washington State.”

Gov. John Kasich: The Ohio governor is flatly opposed to all marijuana—recreational and otherwise—but also considers it a states’ rights issue. He did tell Hewitt in April, “If I happened to be president, I would lead a significant campaign down at the grassroots level to stomp these drugs out of our country.”

Gov. Mike Huckabee: Huckabee is another states’ rights proponent, but otherwise is adamantly opposed to marijuana. “This idea of recreational marijuana, let’s have Colorado have at it for a few years and let’s see how that works out for them,” he told an Iowa television station in October. “I’ve been to Amsterdam a few times. I don’t want us to look like Amsterdam.” But he added that he “probably” doesn’t agree with federal raids of legally operating pot dispensaries.