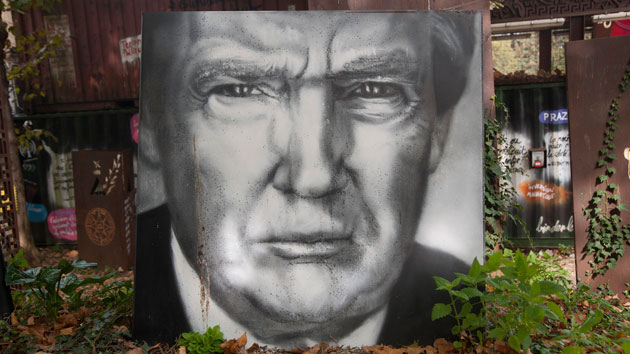 Editor’s note: Mother Jones reporter Tim Murphy recently acquired a time machine. But he didn’t go back into the past and kill baby Hitler. Instead, he traveled forward in time to Boulder, Colorado, to watch Wednesday night’s Republican presidential debate. Here’s his report.

No one ever accused Donald Trump of bringing a knife to a gun fight. Wednesday’s showdown in Boulder was the first debate in which billionaire real-estate mogul Trump was not the Republican front-runner. Though he still holds double-digit leads in New Hampshire and South Carolina, Trump recently dropped into second place in Iowa, and on Tuesday, after leading the GOP pack for 100 days, he trailed Ben Carson in a national poll.

But if Trump had an intention of moderating his style, it didn’t show. He stayed on the offensive throughout the night. When CNBC moderator John Harwood asked Trump if he believed Congress should raise the debt ceiling, he pivoted to attack Carson for his Seventh-day Adventist beliefs (“China has eight days”). And he raised a childhood incident in which the former pediatric neurosurgeon tried to stab a friend with a knife. Carson’s blade became caught in his friend’s belt buckle—no harm was done—and Carson has long credited the lucky break with turning his life around.

“When I stab someone, I stab them in the belly, where the flesh is softest,” Trump said. “That is how you do it. That way you can get right to their organs, and do a really tremendous amount of damage, very serious bleeding. This guy was a surgeon?”

The exchange echoed a similar moment during the so-called “kids’ table” debate hours earlier, which featured the four candidates who did not qualify for the main stage. South Carolina Sen. Lindsey Graham, as he has in previous interviews, lamented that he and his colleagues were losing to a man who “tried to kill someone at fourteen.”

At the adults’ debate, Harwood asked each of the candidates if they had ever stabbed anyone. No one raised their hands—but Kentucky Sen. Rand Paul let out a deep guttural laugh that seemed to well up from some tormented corner of his soul. The #RandLaugh quickly blew up on social media. (Cher called it “strange!!” The fast-food giant Arby’s tweeted—but quickly deleted—an off-color joke about Paul, a knife, and its famous roast beef sandwich.)

Jeb Bush, who has struggled to break into double digits in the polls despite a famous last name and a $100 million super-PAC, tried a bit of humor of his own, displaying a softer, playful side that advisers have said they are “chomping at the bit” to unleash in New Hampshire and Iowa. He deflected a question about his low poll numbers with a pivot. “John, I play on a fantasy football team, and let me just say—the only Pole that matters is Rob Gronkowski,” Bush said, referring to the New England Patriots tight end. He then stared straight into the camera and added, “Gronk, I’d love to have you campaign with me”

But the moment was spoiled by Trump, who had previously vowed to leave Bush alone until his poll numbers improve. “He’s not gonna join your campaign, Jeb, not gonna happen,” Trump exclaimed. “People are leaving your campaign in droves, and it’s very, very sad, really. Yeah, sad, really sad.”

Wednesday night’s debate, the third of 11 scheduled for the Republican field, focused at least nominally on economic issues but often veered off track. It was also the first to feature props. Toward the end of the night, in a nod to the coming Halloween holiday, Harwood asked each candidate to sketch a portrait of his or her deepest fear, using scratch paper and colored pencils provided by the network. After two minutes of drawing, Trump held up his worksheet and shrugged.

It was Rand Paul.