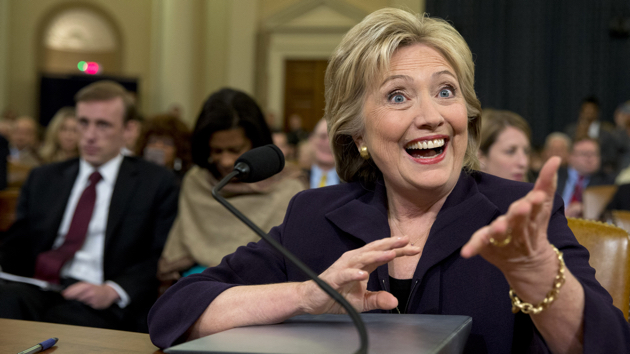 During Hillary Clinton’s testimony before the House Select Committee on Benghazi yesterday, I emailed the House historian to find out what the longest session of congressional testimony on record was, but I didn’t get a response. No surprise there: It was after 7 p.m. The hearing had already gone on for more than nine hours, and it would continue for another two.

Having exhausted just about every line of inquiry into the 2012 attack on the American consulate in Benghazi, Libya, the Democrats on the committee began using their time to comment on the length of the hearing itself. Rep. Linda Sanchez (D-Calif.) pestered Chairman Trey Gowdy (R-S.C.) frequently as the night wore on about how late they were stuck there, and Democrats wondered how many rounds of questions there would be before Clinton would be excused. By 8:30 p.m., Clinton’s voice began to break mid-soliloquy, leaving her in a coughing fit.

Throughout the course of the 11-hour session, Republicans on the committee tried to score political points by pinning the blame on Clinton for the deaths of four Americans in Benghazi on September 11, 2012, and faulting her for using a private email server. But Clinton generally sidestepped those charges with a poise that her Republicans opponents sometimes lacked, eventually departing the hearing room without having committed any of the major slipups that her questioners were evidently seeking.

The morning began with a focus on the attack on the consulate, and particularly on requests for further security made by Ambassador Christopher Stevens, who died in the attack. But as the hearing passed its three-hour mark and Gowdy was getting ready to end the first round of questioning, the Republicans shifted to the matter they’ve hoped will damage Clinton’s presidential candidacy: her use of a personal email account. Gowdy questioned Clinton on her correspondence with longtime confidante Sidney Blumenthal, and tried to score political points by highlighting old grudges from the 2008 campaign between Clinton’s team and Barack Obama’s team.

But Clinton emerged largely unscathed from the email inquiries. “You didn’t need my email address to get my attention,” Clinton said at one point, sidestepping questions on why certain important information hadn’t appeared in the emails released to the public. Clinton said she didn’t even have a computer in her office at the State Department, and that much of her work was done through other forms of communication.

When the committee returned from a brief early-afternoon break, its political nature quickly became evident. Rep. Jim Jordan (R-Ohio) spent much of his question time belaboring the long-debunked conservative theory that the Obama administration explained the Benghazi attack away with talking points to boost the president’s reelection campaign. Clinton had none of it. “I’m sorry that it doesn’t fit your narrative, congressman,” she said in answering one of Jordan’s questions. “I can only tell you what the facts were.”

Rep. Peter Roskam (R-Ill.) was more explicit about the political nature of his critique. “Let me tell you what I think the Clinton doctrine is,” he said, reading his prepared remarks. “I think it’s where an opportunity is seized to turn progress in Libya into a political win for Hillary Rodham Clinton. And at the precise moment when things look good, take a victory lap, like on all the Sunday shows three times that year before Gaddafi was killed, and then turn your attention to other things.” The true scandal of Benghazi, Roskam implied, was that Clinton acted like the politician she was, attempting to spin news in her favor.

The Democrats on the panel spent most of their time on questions pontificating in Clinton’s defense. But as the day dragged on—and on—they grew edgy. By late in the evening, Rep. Elijah Cummings of Maryland, the lead Democrat on the committee, had had enough, erupting in a boisterous assault on the committee itself as an abuse of taxpayer money to find a “gotcha moment” in order to harm Clinton’s presidential ambitions. “We are so much better than that,” Cummings railed.

Clinton seemed to appreciate the sentiment, and as she often did during the Democrats’ questioning, she had a seemingly practiced answer ready to roll out. “I recognize that there are many currents at work in this committee, but I can only hope that the statesmanship overcomes the partisanship,” Clinton said. “At some point we have to do this. It is deeply unfortunate that something as serious as what happened in Benghazi could ever be used for partisan political purposes. And I’m hoping that we can move forward together, we can start working together, we can start listening to each other.”

The lone moment where Clinton approached losing her cool came near the end, when Gowdy began to question the integrity of the Accountability Review Board, an independent commission that looked into the faults that led to the Benghazi attack. But ire was directed mostly at Gowdy’s accusations against former Admiral Mike Mullen. If defending a retired US admiral was her thorniest moment, it was a successful day for Clinton—albeit a very long one.