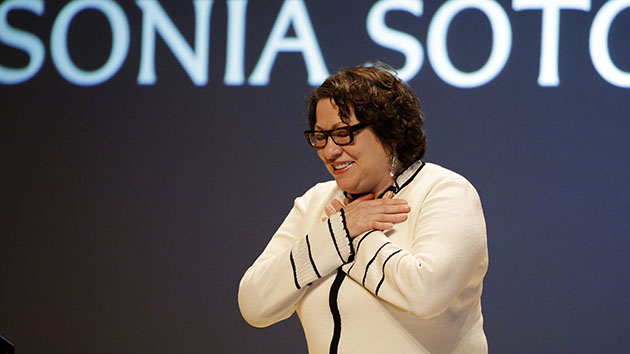 Supreme Court Justice Sonia Sotomayor reflects judicial diversity of a sort that has vanished on some state courts.Matt Slocum/AP

In 2002, Texas Supreme Court Justice Xavier Rodriguez, a Republican, lost his seat on the bench to a white lawyer named Steven Wayne Smith. Smith, a fellow Republican who made a name for himself fighting affirmative action at the University of Texas, suggested that Rodriguez had been “underqualified” for his undergraduate education at Harvard. The Houston Chronicle reported that Smith decided to take on Rodriguez because “he thought a Hispanic wouldn’t do well in the Republican primary.”

In Ohio, African American state Supreme Court justices seem cursed. Two of the three black justices ever to serve on the state’s highest court lost their reelection bids the year after their appointment. In 2012, Justice Yvette McGee Brown, the first female African American on the court, lost reelection to a white woman with an Irish surname.* In fact, the three winners in state Supreme Court races that year all had Irish last names, prompting a local reporter to note that new court “will resemble politicians at a St. Patrick’s Day parade.”

These may not be isolated incidents. A new report from the left-leaning Center for American Progress released Monday finds that minority Supreme Court justices around the country are reelected at lower rates than white judges. (Full disclosure: Mother Jones is participating in a panel discussion about the report Monday afternoon.)

The report, “More Money, More Problems: Fleeting Victories for Diversity on the Bench,” finds that since 2000, the overall reelection rate for incumbent Supreme Court justices in contested races is 88 percent. For white justices, that number is 90 percent. But black justices have been reelected 80 percent and Hispanic justices 67 percent of the time.

“In many states with elections, advocates for diversity have succeeded in pressing for diverse appointments, but these victories are often fleeting,” the report states. “In many states where diverse judges were appointed, they were voted off the bench in the next election. According to new research for this report, appointed black and Latino justices running in their first election only had a 68 percent re-election rate.”

The possible causes of this trend are numerous. Perhaps voters in states like Ohio who knew nothing about the candidates let their subconscious biases come out when they voted for the candidate with the Irish (and therefore likely white) last name. Billy Corriher, one of the authors of the report, points out that in Texas, while the Latino justice lost his seat, two African American justices—whose last names don’t obviously convey the color of their skin—were reelected and ultimately left the bench voluntarily.

In other instances, minority justices lost their seats due to partisan politics. In Alabama, two African American state Supreme Court justices, both Democrats, lost their seats in 2000 amid a Republican surge that year. Today, all of Alabama’s Supreme Court and appellate court justices, including both its civil and criminal appellate courts, are white. “That, to me, was really shocking because you’ve got this state that has a very substantial African American population and it was the site of all these civil right battles that we’ve been celebrating recently—the march from Selma to Montgomery, Bloody Sunday—and we have all these people that fought for voting rights and then today none of those communities are represented on the appellate courts in Alabama,” says Corriher, who studies state courts at CAP. “That’s really tragic to me.”

The rising flood of money into judicial elections tends to hurt minority candidates, whereas public financing programs have fostered diversity. The CAP report points in particular to North Carolina, where a public financing system brought newfound diversity to the bench.

“In 2002, before the shift to public financing and nonpartisan elections, all three black appellate judges who sought reelection lost,” a 2010 report by the group Democracy North Carolina found. “[B]ut the four African-American judges who have run since then in regular elections all used public financing and won. That’s a pretty remarkable turnaround.”

That system no longer exists. After taking over the state legislature and governorship in 2012, Republicans repealed it.

Correction: An earlier version of this article misstated the gender of Justice McGee Brown’s opponent.