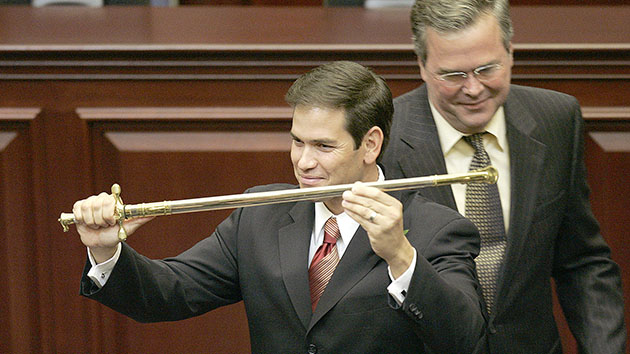 Florida Gov. Jeb Bush presents state Sen. Marco Rubio with a sword during ceremonies designating Rubio as the next speaker of the state House, in 2005.Phil Coale/AP

The veneer of friendship between Jeb Bush and Marco Rubio is beginning to peel. Bush has started taking swipes at his former protégé, who has emerged as a serious threat to his presidential aspirations as a fellow establishment candidate who appeals to the same pool of donors seeking to keep the likes of Donald Trump and Ben Carson off the November 2016 ballot.

But there’s another reason the recent Bush-Rubio skirmishes are likely to become a protracted, all-out war. And it all comes down to their home state, Florida. Winning the Sunshine State primary will be critical for either Rubio or Bush to lock up the Republican presidential nomination. That’s why the worst recent news for the Bush campaign was probably not a Pew Research poll putting Bush at just 4 percent nationally, but a poll released a week earlier, which, for the first time, showed him trailing Rubio in Florida.

“I absolutely think [Florida] is going to be make or break for both Jeb and Marco,” says Ford O’Connell, a Republican strategist who worked on John McCain’s 2008 presidential campaign. “Between Bush and Rubio, this is where the rubber meets the road.”

There are several reasons that Florida is the key battleground for both Bush and Rubio. The first is the delegate math: the race to the 1,237 convention delegates needed to clinch the nomination. The Republican National Committee has established three phases to the primary. The first consists of the carve-out states—Iowa, New Hampshire, South Carolina, and Nevada—that are allowed to hold their primaries and caucuses before the other 46 states. Next come the states that allot delegates proportionally by dividing up their delegates more or less based on the portion of the vote each candidate receives, including the 13 states that will hold their primaries on “Super Tuesday,” on March 1. The third phase switches to a winner-take-all system, where the candidate who gets the most votes wins all of the state’s delegates.

In recent election cycles, Florida has broken the RNC’s rules by holding its winner-take-all primary early in the season, which resulted in a penalty of losing half its delegates. But this year, under a threat of a much harsher penalty of losing nearly all its delegates, Florida moved its primary back to March 15, the earliest date that would allow it to keep all 99 of its delegates without abandoning a winner-take-all primary, which maximizes its influence by encouraging candidates to focus time and money there in order to win the big prize.

“Unless Super Tuesday goes all to one candidate…I see it as dragging exactly to March 15, because that’s when we start our winner-take-all,” O’Connell predicts. “March 15: That’s when we really start separating the contenders from the pretenders.”

Predicting the outcome of the presidential primaries has proven all but impossible—nobody expected Scott Walker to have dropped out in September, while Trump, Carson, and Carly Fiorina lead the polls—but political scientist Josh Putnam, who closely follows the mechanics of elections at his blog, Frontloading HQ, has detected a pattern to the primary madness, at least in the last two presidential cycles. Both John McCain in 2008 and Mitt Romney in 2012 began to pull ahead in the delegate count when 50 percent of all delegates had been awarded, and they clinched the nomination around the time that 75 percent of delegates had been claimed. On March 15, the day of Florida’s primary, the race will cross the 50 percent threshold. “It falls right in that sweet spot,” says Putnam. Since it will be hard for any candidate to amass a delegate advantage in the first two phases of the race, Florida “can potentially be very influential to the winner.”

The second reason to expect a nasty Bush-Rubio contest in Florida is that they could be the only candidates truly competing for the state. Florida is a large, unwieldy state for campaigns, with 10 media markets, some of which command a high cost for ads. For many candidates, it’s hard to create a serious campaign operation there without forgoing the earliest primary states and the Super Tuesday states. (Historically, candidates who focus on Florida rather than the early primary states tend to lose.) Since Florida is a winner-take-all state, candidates who are not Rubio or Bush are likely to decide to marshal their resources more effectively by spending on the other states—Ohio, Missouri, Illinois, and North Carolina—that also have primaries on March 15. Before he dropped out of the race, Walker had openly discussed skipping Florida entirely.

Finally, delegate math aside, Florida is a symbolic must-win. For the Republican Party, the appeal of making either Bush or Rubio its nominee is the likelihood that they could win Florida, a crucial swing state, in the general election. For both men, losing Florida by more than a few points undermines the logic of their campaigns.

“Suppose it’s a close vote; both will survive to fight elsewhere,” says political scientist Larry Sabato of the University of Virginia. “Of course, neither candidate will be able to explain away a decisive loss in his home state.”

Florida could be kingmaker in the fight for the nomination—anointing one of its own and casting aside another. And like many fights over the crown, it’s likely to be a bloody one.