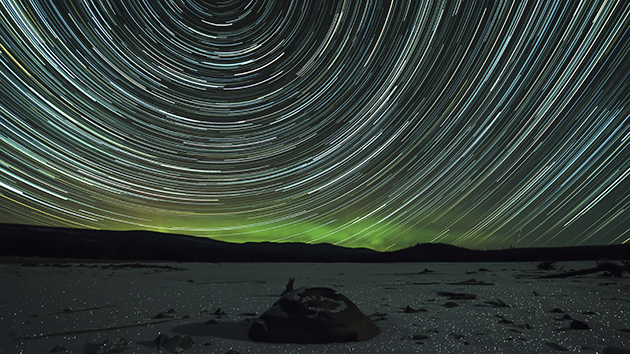 Star trails are seen in the sky over Naramata, British Columbia.Cultura/Zuma

A group of scientists and academics from around the world has launched a new effort called UFODATA, which stands for UFO Detection and Tracking, to apply some rigorous scientific research to the study of UFOs. This all-volunteer, nonprofit project that includes scientists from the United States, Italy, the Netherlands, the United Kingdom, and Chile intends to use scientific data and research methods to advance an issue that has largely been confined to the margins (at best) of the traditional scientific community.

“It’s abundantly clear that we’re not going to make progress in understanding whatever is causing the unknown UFO reports and sightings without getting the type of data we want to collect,” says Mark Rodeghier, scientific director and president of the J. Allen Hynek Center for UFO Studies in Chicago, and now a UFODATA board member. “More witness testimony, where they fill out a form and tell you what they saw, is not going to help us solve the problem,” he says. The problem that Rodeghier is referring to is the frequent, inexplicable sightings of aerial phenomena.

The group of about 15 scientists, engineers, astronomers, professors, and a journalist intend to install a series of automated surveillance stations loaded with scientific research tools at various locations in known UFO hotspots such as those in the western United States and in Hessdalen, Norway. The stations will be used to photograph unidentified objects and analyze the light coming from them in order to learn more about the sources of energy powering them. People have done this sort of thing in the past, but never before in such a coordinated and scientifically rigorous way.

The sensors that the group hopes to build will include several high-resolution cameras fitted with spectrographic grating, which is a method for analyzing the type of light the camera is seeing, and the ways that energy might be affecting the atmosphere around the light source. Here is a video explaining the process. Other equipment includes a magnetometer, used to measure electromagnetic radiation, as well as a Geiger counter and a weather station.

“In this area of science (physics, astronomy, etc.) the best way to learn about something is to get its spectra,” Rodeghier says. He compares it to a rainbow, which is a “spectra” of the sun’s light. “You can see the elements it’s composed of, you can also tell things about its temperature and pressure. There are many, many things that you can learn from a spectra and associated data.”

These sensors aren’t cheap. Each one will cost between $10,000 and $20,000, the group says, which they’re hoping to raise through crowdfunding and other donations.

“UFODATA will rely on crowd funding to finance the stations, allowing the millions of people who take UFOs seriously to be involved in the effort, independent of the scientific establishment,” wrote Leslie Kean, an American journalist and the author of UFOs: Generals, Pilots and Government Officials Go on the Record. After covering the issue for years, she’s also now a board member for UFODATA. Kean announced the project  on her Huffington Post blog earlier this week.

The all-volunteer group hopes to raise enough money to build one prototype station, test it, and prove the concept. Next year they plan to raise additional funds, Rodeghier says, after the project is better known and a more robust volunteer staff is in place.

Rodeghier says more reliable and scientific data will not only advance understanding of UFOs, but might also serve to persuade the public at large that this issue merits more serious examination. Nonetheless, the organizers appreciate that “the UFO community and the UFO problem is something that is pretty much looked down upon by what I call the establishment,” Rodeghier says. “That includes scientists, big media, and politicians, Washington. All those people—and I’m speaking broadly because there’s always exceptions—think the UFO problem, they laugh at it, it’s to be ridiculed, and certainly shouldn’t be supported and funded. And so yes, this is part of an effort, is to say, ‘This problem is serious. It’s like any other scientific problem.'”

But even the new organization has had to grapple internally with the taboo of scientific discussion of UFOs. The initial UFODATA team includes four “silent advisors“—two full professors, an attorney, and an astronomer—who “are prepared to lend a hand, but because of the cultural stigma attached to UFOs—or because of a personal preference for anonymity—have chosen to keep their involvement private” according to the group’s website.